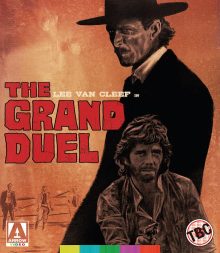 Say what you like about Quentin Tarantino’s ‘appropriation’ of elements from different films, his references did help a lot of forgotten genre gems from the 70s resurface for modern audiences. The Grand Duel (a.k.a. The Big Showdown or Storm Rider) is an example of this. This spaghetti western did fairly well when it was released back in 1972, but, as the genre was in decline, it hardly lit the world on fire. Fast forward 31 years and Tarantino released his hotly anticipated Kill Bill: Vol. 1 upon the world, featuring the theme from The Grand Duel on its soundtrack. In interviews the director also divulged that the film was one of his favourite spaghetti westerns, so its stock rapidly rose. Fast forward another 16 years and Arrow Video are releasing The Grand Duel in a Blu-Ray generously loaded with special features. I’d previously seen the film on a ropey DVD as part of a spaghetti western compilation and enjoyed it, so I was happy to take a look at this polished new release.

The Grand Duel opens with former sheriff Clayton (Lee Van Cleef) arriving in a small village whilst a wanted criminal, Philip Vermeer (Alberto Dentice), is held up in an upstairs room with several bounty hunters surrounding it outside. In a fantastic opening sequence, Clayton strolls into the fray and casually shows Vermeer where all the hunters are hiding. After they’ve been dealt with though, Clayton takes Vermeer as his own prisoner, seemingly to claim the ransom himself.

However, we eventually learn that Clayton knows Vermeer is innocent of the crime he’s wanted for and they both want to find the devious Saxon family (led by Horst Frank), who made the accusations (it was their father, the town patriarch, who was murdered), and set the record straight. The Saxons aren’t easily shaken though and seem more intent on killing the pair than getting to the bottom of who killed their father, so suspicions rise about them. Clayton seems to be the only one who really knows what happened, but he keeps shtum until close to the end.

The Grand Duel is a fairly typical spaghetti western that shares more than a few tropes from Leone’s classics that came before. Its director Giancarlo Santi was mentored by Leone and worked as AD and 2nd Unit Director on a few of his films, so the similarities are more justified than usual I guess, but it means The Grand Duel doesn’t come across as a wholly original film. Nevertheless, it’s a very enjoyable and nicely crafted one, so it does deserve to be recognised as a decent entry to the genre, even if I wouldn’t call it one of the best.

The visual style, the area in which the film is most clearly indebted to Leone, is notable here. Like a lot of the best spaghetti westerns, there’s a strong formal approach to its framing, with some handsome compositions on display. A lot of close-ups are used (ala Leone) and there’s a good use of depth. The flashback sequence, which the film regularly revisits, is stylishly done too, with huge plumes of smoke adding drama to a grainy high-contrast black-and-white film stock.

The music is top notch too. You can hear why Tarantino borrowed it for his film, as Luis Bacalov and Sergio Bardotti’s score is catchy and dramatic, matching the operatic-sounding grandeur of Morricone’s best soundtracks.

Perhaps more importantly, it’s also a lot fun. There are plenty of tense stand-offs to keep audiences on edge and a couple of explosive action sequences too. These occasionally feature some superhuman gymnastics that are a bit ridiculous, but add to the charm.

The performances are solid too. Van Cleef is always reliable, particularly in this type of role, and he doesn’t disappoint. He’s calm and cool as always, quietly dominating those around him without seemingly trying. Co-star Alberto Dentice, who only has 3 film credits to his name (including this one), isn’t the greatest or most charismatic leading man in the world, but he’s enthusiastic and is good at the physical aspects of his role. Frank is an effectively slimy and corrupt wealthy bad-guy, who is sided by a sadistic but effeminate Klaus Grünberg and the hammy Marc Mazza as his two brothers.

So, although The Grand Duel hardly breaks the mould, it is nonetheless an entertaining and nicely put together spaghetti western that ticks all the boxes. If you’re a fan of the genre, it’s definitely worth a look.

The Grand Duel is out on 6th May on Blu-Ray in the UK, released by Arrow Video. It looks great with a clean, clear and naturally textured picture. Sound is solid too, and both the Italian and English language options are available.

There’s an incredible amount of special features included in the set too. Here’s the list:  - New 2K restoration from the original 35mm camera negative
– High Definition Blu-rayTM (1080p) presentation
– Uncompressed mono 1.0 LPCM audio
– Original English and Italian soundtracks, titles and credits
– Newly translated English subtitles for the Italian soundtrack
– Optional English subtitles for the deaf and hard of hearing for the English soundtrack
– New audio commentary by film critic, historian and theorist Stephen Prince
– An Unconventional Western, a newly filmed interview with director Giancarlo Santi
– The Last of the Great Westerns, a newly filmed interview with screenwriter Ernesto Gastaldi
– Cowboy by Chance, an interview with the actor Alberto Dentice AKA Peter O’Brien
– Out of the Box, a newly filmed interview with producer Ettore Rosboch
– The Day of the Big Showdown, a newly filmed interview with assistant director Harald Buggenig
– Saxon City Showdown, a newly filmed video appreciation by the academic Austin Fisher
– Two Different Duels, a comparison between the original cut and the longer German cut of The Grand Duel
– Game Over, an obscure sci-fi short film from 1984 directed by Bernard Villiot and starring The Grand Duel’s Marc Mazza
– Marc Mazza: Who was the Rider on the Rain?, a video essay about the elusive actor Marc Mazza by tough-guy film expert Mike Malloy
– Original Italian and international theatrical trailers
– Extensive image gallery featuring stills, posters, lobby cards and home video sleeves, drawn from the Mike Siegel Archive and other collections
– Reversible sleeve featuring original and newly commissioned artwork by Matt Griffin
– FIRST PRESSING ONLY: Illustrated collector s booklet featuring new writing on the film by Kevin Grant and original reviews

All the bases are covered here in this extensive set. The commentary is a good cover-all, though some time is spent describing what’s happening on screen, which is a pet peeve of mine when it comes to commentaries. Austin Fisher’s appreciation is interesting and helped inform this review. The Marc Mazza essay is an enjoyable, quirky look at a bit-part actor. The inclusion of a short film he was in is an odd choice, but it’s quite a fun, stylishly made little sci-fi action short. All of the interviews are fairly lengthy too and it’s enjoyable to hear the numerous anecdotes they share, so it really is an impressive collection of material.