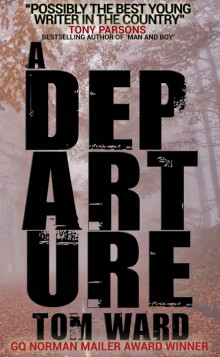 A Departure is a debut novel written by talented young author, Tom Ward, winner of the GQ Norman Mailer Award 2012.

In the acknowledgements section Tom Ward thanks Cormac McCarthy for setting the standard. That caught my attention because McCarthy’s The Road is a stunning book, which has lived on in my head for years. I mention that because the contrast between The Road and A Departure was fascinating and I wonder how much that is due to generational differences between the authors.

Briefly, The Road is a powerful story of the selfless love of a father for his son set amidst the utter devastation of the world. A Departure is also a post apocalyptic vision seen through the eyes of a much more egocentric young adult. Michael is trying to make his way to France but it’s not until the end of the book that we learn why. Along the way he commits an inexplicable murder and collects a ragtag group of people. I could imagine his journey being made into a computer game.

The cause of the destruction isn’t explained in either book but the action is set much nearer the actual event in A Departure. There were anomolies that I found disconcerting, like why the “wind” could kill people inside airplanes and houses but not all the people who were outside or seemingly any other species of living creature. I also wondered why just Britain was affected and why British soldiers would shoot desperate, unarmed citizens at the ports. But perhaps the author wanted his readers to experience that sense of confusion and disconcertedness to make the story feel more real. I don’t want to give any spoilers but will reassure potential readers that hope and goodness prevail.