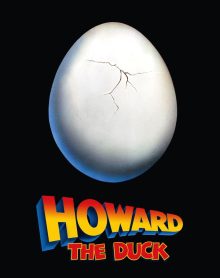 George Lucas gets blamed for a lot. For some critics, he ruined popular American cinema. With two films, they argue, Lucas destroyed the thoughtful, artistic, adult Hollywood of the early 1970s, and made it a place that cared only for dumb teens and excitable kids. First, American Graffiti showed that cheap, loud movies about the antics of teenagers could make a lot of money. Then, Star Wars showed that expensive, loud movies that appealed to children (or the child in every adult) could make even more. The studios learned these lessons quickly, and by the mid-1980s they were making little else. Or so the argument goes. In many ways it’s over-simplistic, and views one period with a rose-tinted lens and the other with a dirty one. And yet in 1986, Lucas was behind a film that seemed designed to prove his critics right.

Howard the Duck is a compendium of the worst aspects of the trends American Graffiti and Star Wars inspired. It has the crude humour, excessive music and sex obsession of the era’s most unpleasant teen films, AND it has the pointless spectacle, noise and ‘cute’ character design of post E.T. and Ewok science fiction. Most bizarrely the filmmakers mix the two genres within scenes and even single shots (Look! A duck with bare breasts!), making it too adult for small children and too childish for teens. It’s a horrible, horrible mess. Sometimes, misfires improve with age, acquiring a campy charm that wasn’t appreciated on their original release. Howard the Duck is not one of those films. It’s still a mess, albeit one well worth seeing, both because disasters of this magnitude don’t come along that often, and because hidden in the wreckage there are glimpses of impressive work.

The film opens on an egg-shaped planet, where ducks are the dominant species. They’ve evolved into short, feathered humanoids, with hands instead of wings. Duck society is almost identical to ours, except for an inexplicable love for bird-related puns in all their product names (drinking Birdweiser, shopping at Bloomingducks, etc.) We’re introduced to Howard, a magazine copywriter with aspirations to be a musician. He’s at home one night when a laser beam drags him through several walls, out into space and down to Earth. There, he meets singer Beverley (Lea Thompson), who finds him charming (and maybe a little sexy? Urgh.) and resolves to help him get home. Along the way they are joined by a loud, manic scientist played by Tim Robbins, and have to deal with another species accidentally brought to earth – a monster known as a Dark Overlord of the Universe, who would like to bring his friends to take over the planet.

There are things to like. Howard himself is a marvel of practical effects, his face a radio-controlled mask that clearly builds on Lucas’s Star Wars experiences. Similarly, when the Dark Overlord appears in its final stop-motion form, it is an advance over the Rancor in Return of the Jedi in its complexity and the smoothness of its movement (although the lighting is weirdly off). Neither Thompson’s character, nor her role in the narrative, makes any sense, but the actress does her best to overcome these limitations and often genuinely seems to be having fun. The same cannot be said for Robbins, who more closely matches the general tone of the production by raving wildly at random intervals.

To make Howard the Duck, Lucas employed two friends, married couple Gloria Katz and Willard Huyck, with whom he had written American Graffiti and Indiana Jones and the Temple of Doom, as writers, producer and director. These are talented people, and yet somewhere, the material (originally a Marvel comic) utterly defeated them. In recent years, the film has been given new historical significance because of the success of Marvel Studios. Howard was the first Marvel character to be adapted into a theatrically released feature. Afterwards, it would be another 16 years before another Marvel character (Blade) was given a US cinema release. If any Marvel fans are wondering why Hollywood took so long to return to the comics, a quick viewing of Howard the Duck should provide all the answers they need. So perhaps this is one instance where blaming George Lucas is actually fair. 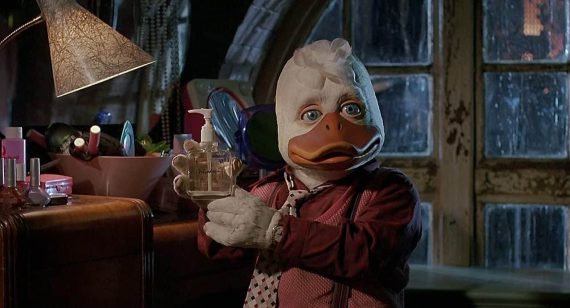 This Blu-Ray release allows you to see and hear every detail of Lucas’s folly. Like every other aspect of the film, the colour palette is all over the place – sometimes bright and colourful, sometimes shadowy and dark, and the disc does an excellent job of recreating both. Sometimes the image can be quite noisy with film grain, but it isn’t a major or frequent issue. On the soundtrack, both the music and the explosions are captured effectively.

The special features include a fun selection of archival promotional features, and three specially commissioned supplements exclusive to this 101 Films release. These are all of a good standard, though oddly samey. First, BFI historian Vic Pratt offers a 20-minute video discussion that covers Howard’s comic origins, his journey to the screen, and the final film’s strengths and failures. Then, there are two commentary tracks, each by a pair of UK-based film critics, that more or less cover the same ground, albeit in more detail and with differing emphasis. All three features are well-researched and engaging, but inevitably there’s a lot of repeated information. For most people, the Pratt overview will be sufficient. The commentary tracks also suffer from variable sound quality. There is no retrospective content featuring any of the filmmakers, which is understandable given the film’s reputation, except the US Blu-Ray has 40 minutes of documentary that are missing here. The UK does get a limited edition booklet, but that wasn’t available for review.