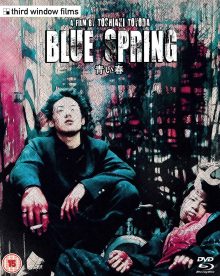 Japanese culture, particularly through its film and manga output, has long been interested in juvenile delinquency and violence as subject matter. There was reportedly an increase in violence in Japanese schools during the 80s and 90s. Like with Columbine and similar in the US, Japan witnessed some disturbing attacks from teenagers at the time that made big headlines and shocked the nation. Of course this influenced films and manga and Toshiaki Toyoda’s 2001 film Blue Spring (a.k.a. Aoi haru) is an example that fuses the two, being based on a manga by Taiyô Matsumoto (who also wrote the strips on which Tekkonkinkreet and Ping Pong were based). Toyoda also describes in the commentary included here how he took a lot of inspiration from experiences of his own time at school when adapting the manga for the screen.

Blue Spring is set in (the presumably fictional) Asahi High, a rough, graffiti-coated high school for boys. Kujo (Ryuhei Matsuda), Aoki (Hirofumi Arai), Yukio (Sousuke Takaoka), Yoshimura (Shugo Oshinari) and Ota (Yuta Yamazaki) are a gang of friends who lord over the school. Kujo becomes their ‘boss’ after winning the ‘clapping game’, which entails seeing how many times they dare clap after letting go of the railings of the school roof whilst they hang off the side, several stories up. The teaching staff have mostly given up trying to discipline the gang or support them in their next stages of life, so the boys are left to do as they like at the school.

They’re all lost and disillusioned though, and one-by-one the boys drop out of the group in various ways. Eventually, just Kujo and Aoki are left, so rival gangs start to try to muscle in. As Kujo grows more jaded and distant by this existence, Aoki grows more frustrated and aggressive, after being seen as somewhat of a ‘tagger-on’ before. He becomes a violent dictator himself over the school and the once good friends are torn apart whilst Aoki’s sanity becomes ever more fractured. 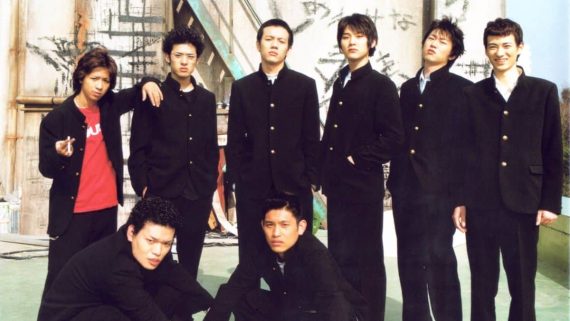 I’ve always had a thing for high school coming of age films, particularly those with a darker edge, and I’m a big fan of Japanese cinema too, so this was a film well suited to me. In fact, I’m annoyed I hadn’t heard of the film prior to being offered a screener, as I thought it was excellent.

Blue Spring is a film that successfully treads a fine line between presenting a disturbingly dark and violent yet also relatable and believable depiction of the difficult transition from youth to adulthood. There are incidents that certainly aren’t the norm and the level of freedom the boys have in the school and dominance over their teachers is extreme, but at the same time their lack of direction and sense of loss over their failed childhood dreams is something most people have felt at some point during their adolescence.

The style of the film mirrors this parallel between the extreme and the natural. Shot with largely blacks, whites and greys (other than the cherry blossoms and flowers that play a symbolic role in the film), there’s a grim and gritty look to the film, but equally it’s quite stylishly shot. Particularly when matched with its superb heavy rock soundtrack, largely consisting of tracks from the band Thee Michelle Gun Elephant, Blue Spring plays things cool with doses of slow motion, occasionally creative editing and some unusual angles. Good use is also made of the black graffiti around the school which gradually grows, even enveloping the school in one brief dream-like vision. This stylish nature highlights the brazen arrogance of the protagonists, whilst the darker, grainy look helps keeps it grounded in a perceived reality. 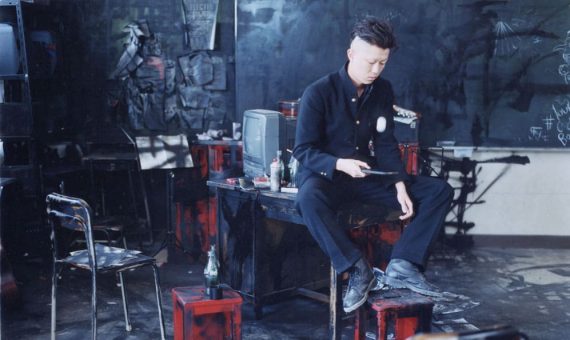 The pace once again has a sort of duality to it. For the most part, the film has a languid feel, befitting the aimless nature of the youths. However, when the violence comes, particularly in the second half as it becomes more prevalent, the pace becomes sharper and more aggressive. Speaking of the violence, these scenes are handled superbly. The camera often cuts from the actual act itself at the crucial moment, but enough is built up beforehand or enough of the action is shown from a different perspective to allow for maximum impact. A great example is a stabbing that occurs in a bathroom cubicle. The camera, which has been inside the cramped space leading up to the attack, cuts to outside the cubicle once it begins. Instead of seeing the attacker plunging his knife into his victim, we see the knife pushing through the door after it’s gone through him. This makes for a much more disturbing image than we might get from a conventional approach.

So, it’s a stylish and hard-hitting teen movie that will stick with you for a long time. Perhaps it’s not saying anything new and some of the symbolism (with the flowers in particular) is a bit on the nose, but its portrayal of disillusioned youth is highly effective. It certainly packs a punch, yet has a laidback, often quiet rhythm befitting the theme, so comes across as fairly unique, like a kind of mumblecore Battle Royale, and it’s all the better for it.

Blue Spring is out on 13th May, released by Third Window Films on dual format (all-region) Blu-Ray & DVD. The picture and audio quality are both excellent; detailed, but retaining the original grain and texture of the film.
There are a couple of special features included:
- New Audio Commentary
– Making Of
– Trailer

The commentary is very good, with Toyoda providing a detailed account of production. He spends a little too much time berating Hirofumi though, claiming he was a poor, inexperienced actor so demanded multiple takes and was difficult at times. Otherwise, the track is filled with interesting tidbits about the making of the film and where some of his inspiration came from. The Making Of contains a lot of revealing behind the scenes footage so is also a worthy addition to the set too, even if it’s a little rough around the edges.