Cujo is a lovely film about a friendly, much loved family farm dog. Well at least part of that is true, that is until the dog becomes rabid and terrorises a young mother and her son trapped in a broken-down car. This 1983 film directed by Lewis Teague is an adaption of a Stephen King novel of the same name. Although not the best Stephen King adaption of the year (there were three) and certainly not as good as the previous three, Carrie (1996), The Shining (1980), Creepshow (1982) it has some great acting, a story which is horrifying because of its believability (obviously a little embellished) and some fantastic cinematography and editing.

Anyone who has ever read a Stephen King novel will know that he likes to spend a large chunk of his novels setting the scene and introducing the characters, with only the odd hint of the gripping action to come. This film is no different. Time is spent getting to know the characters and the ins and outs of their lives. However, this build up is necessary for the audience to appreciate the remainder of the film which is set almost entirely in one place and relies heavily on us as an audience having empathy with the main characters.

The narrative follows the lives of Donna Trenton (Dee Wallace) her husband Vic (Daniel Hugh-Kelly) and their young son Tad (Danny Pintauro). Donna Trenton seems to have the perfect family life with her loving husband and large house in the suburbs, but it is soon revealed that she is having an affair with the local stud Steve Kemp (Christopher Stone). In an attempt to rescue her marriage, Donna ends her affair and asks for her husband’s forgiveness. Due on a business trip, Vic leaves Donna to think over his next steps. 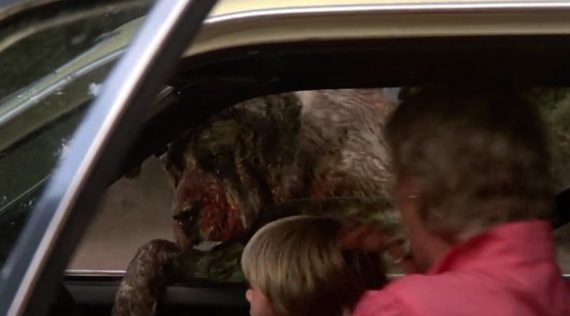 Meanwhile, an increasingly manky and aggressive, rabid Cujo (bitten by a bat whilst chasing a rabbit down a hole) starts his killing spree on some less than pleasant characters who we are introduced to along the way. By the time Donna and her son turn up at the old farm to see if the owner can fix the car, Cujo is on the brink of total madness, secreting pus and covered in blood and drool.

The remainder of the film focusses on Donna and her son trapped in the car being terrorized by Cujo. Whilst making many failed attempts to escape to the house, the health and welfare of her son Tad, deteriorates, pushing Donna to make a final attempt at escaping the now non recognisable farm dog.

The opening titles of this film are a masterpiece of cinematography by Jan De Bont. We see a beautifully green meadow, a rabbit peacefully hopping around and then Cujo, just a loveable family farm dog ready for a bit of fun. A chase ensues and we are given a glimpse of what is to come. Shots vary angle and viewpoint as we switch between panoramic views to close shots from Cujo’s viewpoint and that of the rabbits. Finally, the opening scene closes with an unfortunate Cujo bitten on the nose by a rabid bat, disturbed by the dog’s pursuit of the rabbit into its underground cave. 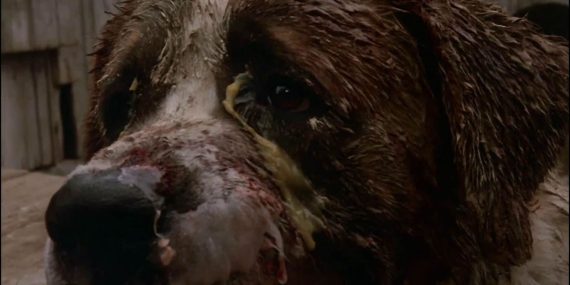 As the film advances, good direction by Teague, great cinematography by De Bont and an ever-evolving build-up of makeup on Cujo all come together with brilliant editing to create what turns out to be quite a suspenseful and thrilling second half to the film. In particular, the climax of the film with its short sharp edited scenes works brilliantly in capturing the tense feel of the situation – a real credit to Neil Travis who later went on to edit several other great films such as Dances with Wolves 1990, Patriot Games 1992 and Outbreak 1995.

Dee Wallace, first known to me as the news reporter Karen White in Joe Dante’s The Howling 1981, gives an impressive performance as the bored and regretful housewife, trying to protect her family. Her pain and anguish become our own, especially towards the end where all hope seems to be lost. However, it is the performance of young Tad played by Danny Pintauro that really makes this film tug a heartstring. This child seems to be traumatised, to the point that I wonder whether they just stuck him in a car and let the dog terrorise him without giving Danny any idea of what was going to happen. Whatever the circumstances, his performance in that latter part of the film is a real credit to him. Not many child actors can pull off such a role so well.

In today’s world of remakes, and especially at the moment with the resurgence of Stephen King novel adaptions, I am sure it won’t be long before we see another version of Cujo turning up on the big screen. No doubt the remake will be much darker and creepier. However, this version is still worth a watch, particularly if you are a fan of Stephen King. The beginning is slow, and it is a little dated, but the acting is good, there is some lovely cinematography and the mixture of good make-up and editing transform Cujo into a believable rabid animal. 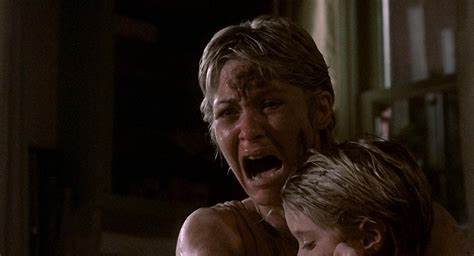 In this new released edition, there is over 7 hours of extras. Extras worth a watch include a 42-minute documentary on the making of Cujo from pre-production to post production and various shorter interviews with cast and crew. There is also a talk by Kim Newman about some of the other Stephen King adaptions made in the 1970s and 1980s. For the real film buffs, there is a Question and Answers session with Dee Wallace taken from the Cinemaniacs and Monsters Festival in 2015.

This limited edition of Cujo is released on Blu-ray and DVD by Eureka Entertainment Ltd with the following extras: