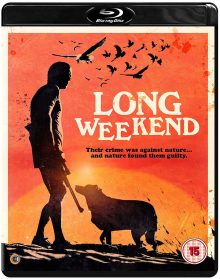 The Australian New Wave of the 70s and 80s saw a sudden flood of original and varied cinema come out of the country to reasonable success and acclaim around the world. A ‘wave within a wave’ coming from this was the start of what is now referred to as ‘ozploitation’. This is the name given to the exciting, generally quite low budget, genre movies that came out of Australia. The 2008 documentary Not Quite Hollywood did a great job of celebrating the movement and, being the avid collector that I am, it had me compiling a long list of fun-looking films for me to buy. Pretty high up the list was Long Weekend, Colin Eggleston’s 1978 ecological horror movie, which was highly regarded in the documentary. It wasn’t highly regarded in Australia when it was first released though and might have died a death if its producers hadn’t taken the film to European festivals where it was a great success. In particular, it swept up a number of major awards at Sitges in 1978. I never got around to buying Long Weekend on DVD, despite its high placing on my ozploitation wish list, but luckily Second Sight have come to my rescue several years later and allowed me to check out their forthcoming Blu-Ray.

Long Weekend sees a city-dwelling couple, Peter (John Hargreaves) and Marcia (Briony Behets), head off on a camping trip for the weekend, in a vain effort to patch up their fractured marriage. The holiday is unlikely to make a difference though as Marcia would rather be in a hotel and Peter stubbornly insists, even sneaking his beloved dog Cricket into the truck despite Marcia’s desire to leave him home.

The pair continue to bicker whilst out in their secluded spot by the beach, but display a few brief flashes of love for each other. We also gradually learn hints about what caused the chasm between them. This will soon be the least of their troubles though, as their continued disregard for the animals and plant life around them comes back to haunt them. On their trip, among other things, they run over a kangaroo, chop up a tree and most notably shoot an endangered dugong. As the film’s tagline puts it “their crime was against nature… and nature found them guilty”. So, in several unusual sequences, eagles, possums and other creatures attack them as punishment.

It sounds like a ridiculous concept and, yes, I imagine people would find the whole thing a bit daft, particularly when the animals fighting back are largely ones viewed as harmless. However, Eggleston does a superb job of pulling it off. It’s an absolute masterclass in suspense, with tension slowly cranked from the start, right the way through to the intense final act. Even in this last half hour, the tension and horror are achieved through largely quite subtle means. There’s very little gore or violence on screen. The audience are kept on edge through brilliantly utilised sound effects and the power of suggestion through unusual shot-choices. A steady build of odd occurrences surrounding the couple unsettle, as you’re never quite sure what’s in store for them next.

One thing you are sure of though is that it can’t end well for Peter and Marcia. What’s interesting about the film is that you don’t actually want it to. In most horror films you follow protagonists that you wish to see survive. However, here the leads are despicable people with no sympathy for the nature around them or even each other. So you’re willing on nature to win and the sense of doom that pervades the film suggests it will. This approach of presenting unlikeable protagonists can often be a mistake, as it’s hard to relate or care about what’s happening to them. However, here you have the animals to root for and we are thrown just enough glimpses of warmth from the central pair to feel frightened for them. Peter’s love for his dog, for instance, is touching. Also, when we learn the main reason why the pair have fallen out, we have more sympathy for why Marcia, in particular, is in a bad state of mind.

The raw presentation of such a toxic relationship also helps raise the film above the level of straight-up exploitation. The ecological theme of the film sets it apart from many other basic slashers of the time too, although it’s not the only horror movie to use such an idea. I would say the message is rather heavy handed too. The couple’s ‘crimes against nature’ are perhaps over accentuated, but I guess the film wouldn’t work if it wasn’t clear what they were doing wrong.

I think the message also seems blunt because the film is so sparse. There’s no added padding, just the core relationship drama and the fight against nature (which are linked too) and this helps the film stay lean and highly effective. I’ve always been a fan of the less-is-more approach and this is a perfect example of it in action. OK, so it’s not a particularly subtle film and some may find it a bit silly, but I was absolutely gripped and pretty damn frightened by the end. Taken as a stripped-back exercise in sheer tension, it’s hard to beat.

Long Weekend is out on 5th November on Blu Ray in the UK, released by Second Sight. There was a slight flicker on a couple of shots near the start, but this seemed to fade away soon after and, on the whole, the transfer is superb, with a detailed, damage-free picture and solid audio.

There are a few decent special features included too:

These are all worthwhile features. The Hargreaves interview is only short, but it’s fun to hear how totally unlike his character he is in reality. The commentary is a nice mix of anecdotes and technical information about how the film was made. The panel discussion provides some interesting takes on the film too.

* Please note, stills are not taken directly from the Blu-Ray, so are not indicative of the picture quality of the disc being reviewed.