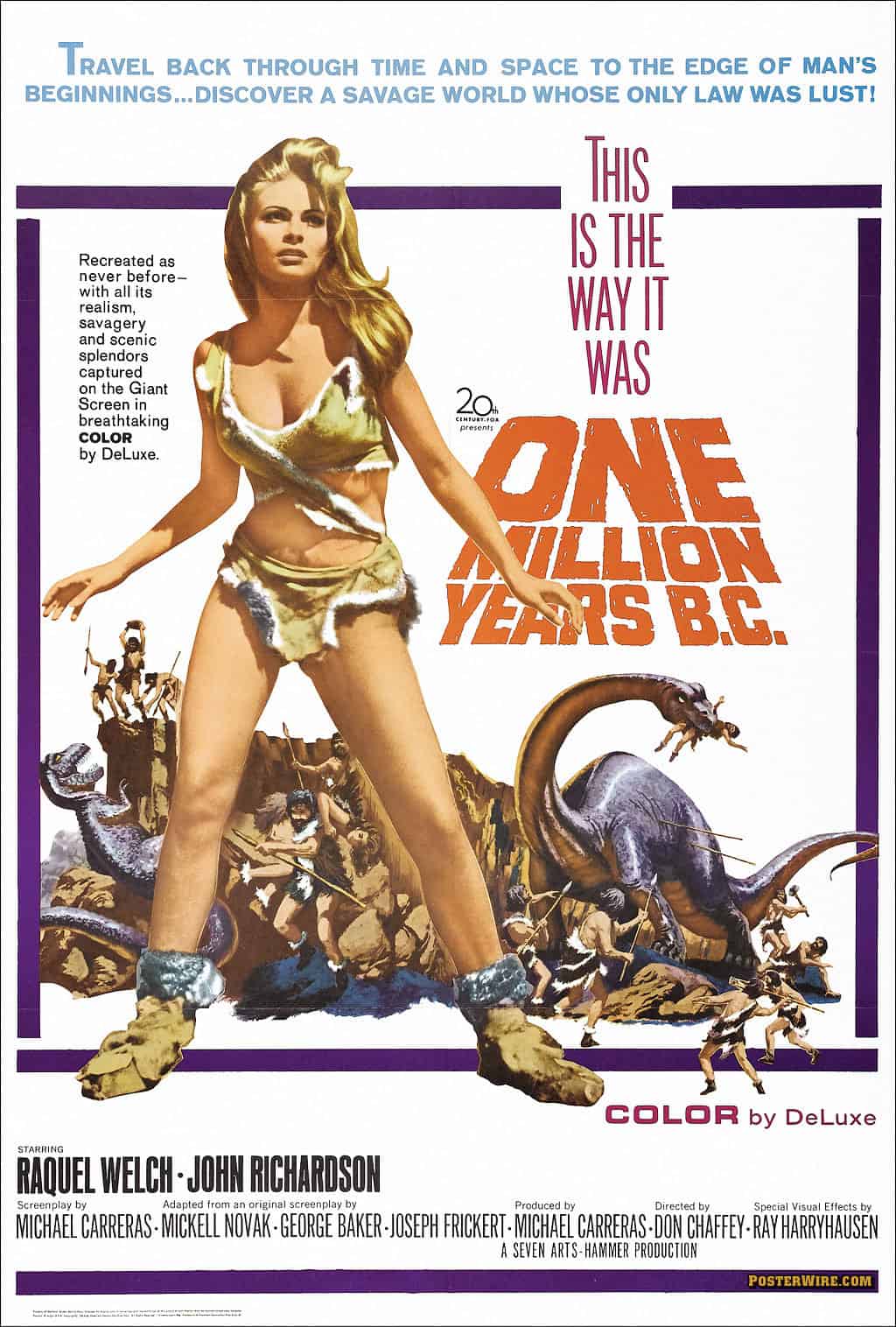 Originally made in 1966 by Hammer Film Productions and Seven Arts, with stop motion animation by the legendary Ray Harryhausen, this is an epic classic from start to finish.

In the  inhospital landscape of One Million Years B.C. Akoba (Robert Brown) hunts in the wilderness for food, leaving the old to die where they fall, his troop manage to catch a warthog. His son Tumak (John Richardson) dispatches the beast. There’s a bit of a ruckus over who gets to eat the meat and Tumak is turfed out of the tribe and left to defend himself against ape men, dinosaurs and a big ass spider. He manages to collapse in just the right spot at the right time as Loana (Raquel Welch) happens to be passing. They are in for another monster attack by a gigantic turtle (Archelon) in this iconic beach scene, the men from Loana’s tribe, the Shell tribe defeat the beast and take Tumak back to their village. 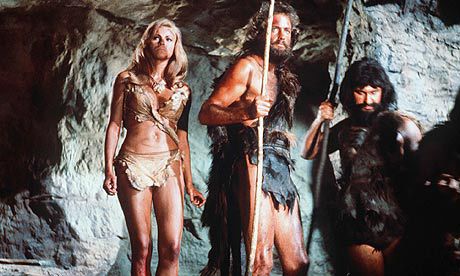 At the Shell tribe’s encampment, they are again attacked by a dinosaur, and a small girl is left trapped in a tree, Tumak goes to her rescue saving her with the help of Loana. Tumak tries to steal the spear that he defeated the dinosaur with, much to the displeasure of the village, who banish him to the wilderness yet again. He leaves with Loana, but before they go, Ahot gives him the spear he was caught stealing as a sign of respect.

Tumak and Loana return to the Rock people to find Sakana (Percy Herbert) has taken over the tribe by trying to kill his father Akoba. There is the inevitable fracas leading to another bust up. However this is nothing compared to the fight between Tumak’s ex Nupondi (Martine Beswick) and Loana when Nupondi finds out he has not been on his own in the wilderness. 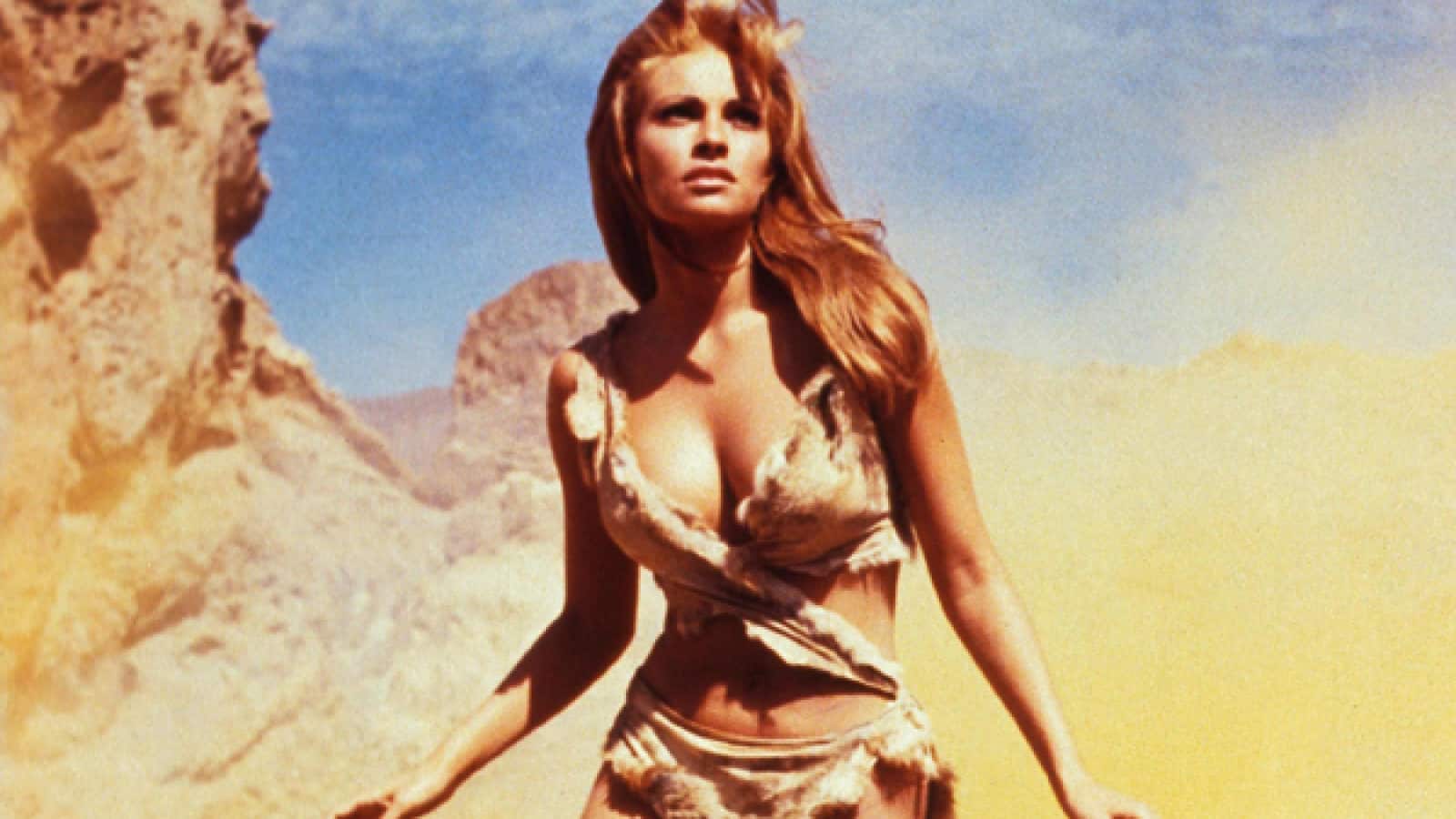 Loana starts to settle into Rock people life and teaches the Rockies to swim, but the happy scene is destroyed when more dinosaurs decides to spoil the day. When Tumak arrives on the scene he is horrified to see the dinosaur eating what he believes to be Loana. Meanwhile Sakana is still determined to take over the Rock tribe, organising another assault but the Shell tribe come to rescue in a grand finale of prehistoric violence.

I reviewed the brand new 4k restoration release by Studiocanal and thoroughly enjoyed this crisp new version. There are some nice extras on here to, including: interviews with Raquel Welch and Martine Beswick, plus Ray Harryhausen stills, storyboards and artwork and a stills gallery. So treat yourself to this 50th anniversary restoration released on double play on 24th October. Loved it!