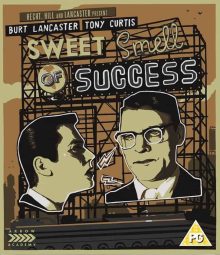 I recently moved house and with all the unpacking and DIY to do I’ve been building a bit of a backlog of screeners to review. In hindsight I should have been sensible and not taken any on over this period, but I struggle to turn down the opportunity to watch some of the interesting and exciting titles I get offered from my PR/distributor friends. If we’re talking about being sensible, I certainly shouldn’t have said yes to Arrow Academy’s new re-release of Sweet Smell of Success, as the offer came late when I was already very busy and it’s a film I’ve seen before and actually own on DVD. However, it’s such a great film which I haven’t seen for a long time and the chance to watch a nicely remastered Blu-Ray from the ever reliable Arrow family is very hard to turn down. So I didn’t.

The under-appreciated director Alexander Mackendrick made his US directorial debut with Sweet Smell of Success after a string of well-loved Ealing comedies in the UK (and the drama Mandy, a.k.a. Crash of Silence). The film follows slimy press agent Sidney Falco (Tony Curtis) as he worms his way through New York City’s nightlife, attempting to appease the all-powerful Broadway columnist J.J. Hunsecker (Burt Lancaster). This brutish journalist has the power to have a man “sentenced to death” (professionally speaking) and he has given Falco an important task, to break up the burgeoning relationship between Hunsecker’s sister, Susie (Susan Harrison), and the jazz guitarist Steve Dallas (Martin Milner). You see, although Hunsecker is a hateful and frightening person, he is incredibly protective of his younger sister and won’t let anyone else get close to her, particularly a lowly jazz musician. Steve is a good man though and the two are very much in love. This doesn’t stop Falco, who hatches has a plan to use Steve’s integrity to his advantage. As he puts it, integrity is “a pocket fulla firecrackers – looking for a match!” Once this is set up (pretty quickly), for the rest of the film the audience sits back and watches Falco put his devious scheme into action.

‘Sits back’ probably isn’t the right word though. Although the plot isn’t particularly dense (the film is largely made up of a lot of acid-tinged conversations), it’s an exhausting watch. The immensely quotable dialogue fires out like a machine gun (check out the IMDB quotes page) and the camera never stands still as we are whisked from nightclub to office to bedroom. It’s quite a dizzying trip into the depths of depravity one man will go to find what he calls success. 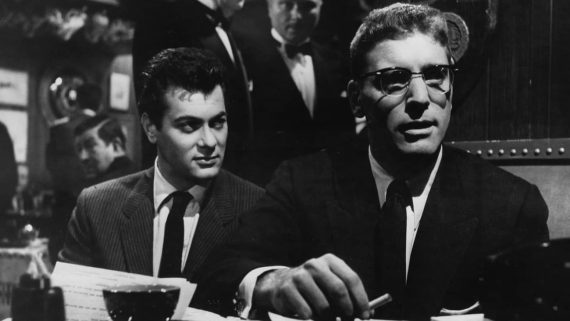 It is quite depraved too (though not in an exploitative visual sense). Nearly 60 years after its release, the film has lost none of its seedy, nasty edge. The scene where Falco talks a cigarette girl, his supposed friend, into sleeping with a columnist to grease the wheels is particularly disturbing. I’m often put off by films where all the lead characters are horrible people (I struggle with Closer for this reason), but here I couldn’t tear my eyes away. It helps that the vicious dialogue is wittily and blackly comic, but it’s also largely down to the incredibly strong performances from Curtis and Lancaster. The former puts in everything he can to create probably the most weaselly character ever put to celluloid. The latter is full of still, considered menace and dominates every frame he enters.

Mackendrick’s direction and James Wong Howe’s photography aid the portrayal of these characters too by keeping Curtis constantly moving and hovering over shoulders and having Lancaster stay static, often placing him dominantly in the foreground or shooting him from a low angle to make him tower over everyone. A shot which sees him looking out over the city for instance makes him look like a giant surveying his land. The cinematography in general is superb, capturing the city like few had managed before. It has a wonderful film noir look (which the film could easily be categorised as), but with more of a breathless energy in its movement.

Also adding to the atmosphere is the wonderful score from Elmer Bernstein with added tracks from the Chico Hamilton Quartet. Jazz music is almost constantly blaring out on the soundtrack, adding to the sleazy, arrogant swagger of the film. The scenes with Steve’s group (who are actually played by Chico Hamilton’s Quartet, other than Steve) sound suitably authentic too and for a jazz lover like myself it adds extra pleasure to the experience.

Sweet Smell of Success is a real tornado of a film. It tears through the screen and destroys everything in its path. It may have a few flaws (Harrison and Milner can’t match Curtis and Lancaster and there are a couple of technical hiccups in the dubbing and focus), but the driving force of the film is so powerful you can’t help but get swept up in it. It’s wickedly funny, but leaves a nasty taste and makes you want a wash afterwards. I mean that in the best way possible though. Like Touch of Evil, the film is a triumph of using great cinematic technique to propel brazen and bombastic material to dizzying heights.

I’m so glad I didn’t pass on reviewing it.

Sweet Smell of Success is out now in the UK on Blu-Ray, released by Arrow Academy. The picture quality is fantastic, with the print looking very clean and detailed. It’s almost too good as it shows up a few out of focus shots. Audio is very strong too, with the scintillating dialogue coming through clearly and the score belting out effectively too.

For special features you get a 26 minute ‘appreciation’ and selected scene commentary by Philip Kemp, author of Lethal Innocence: The Cinema of Alexander Mackendrick. Kemp knows his stuff of course and is full of interesting backstories and facts. You also get Mackendrick: The Man Who Walked Away a 1986 Scottish Television documentary, featuring interviews with Mackendrick, Burt Lancaster, producer James Hill and many other big names in Hollywood. This is fairly frank, casting some light on what happened to the director to make him leave the industry after creating some incredible work.

You also get a booklet included in the package with new writing on the film by Michael Brooke and Mackendrick’s own analysis of various script drafts, illustrated with original stills and posters. I didn’t get a copy of this with my screener, so I can’t comment on its content, but generally these booklets are well worth a read.