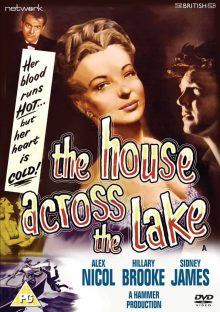 Occasionally narrated by its main protagonist, author Mark Kendrick – who in the introduction meets up with an unseen man, who we later learn to be a police detective investigating the death of a millionaire – The House across the Lake is a rather stagey, but nevertheless involving crime thriller based on the writer’s own book, namely ‘High Wray’.

Struggling writer Mark Kendrick (played by Alex Nicol) rents a lakeside bungalow opposite a millionaire’s mansion called ‘High Wray’. One evening he ends up ferrying some party guests across the lake for the lady of the house, Carol Forrest, who quickly invites him to join them. He does so and ends up with Carol’s alcoholic husband Beverley who is suspicious of any man who comes near his alluring wife due to her previous dalliances with other suitors behind of his back – and sometimes even in plain view! It quickly becomes apparent to our narrator that all is not well in the Forrest household, but that doesn’t stop him falling for Carol and becoming kind of friends with her husband, who he seems to have a fair bit of sympathy for; although not enough to stop him getting off with his femme fatale wife!

As Mark gets further sucked into the politics, sexual and otherwise, of the Forrest household he finds himself torn between his growing loyalty towards his new friend Beverley, well played by Sid James (Yes, him from the Carry On films) and his doomed attraction to the curvaceous and rather cruel Carol. As the film enters its final reel Mark is cajoled into helping Beverley’s scheming wife on the promise that they can finally be together in a few months’ time, but love and war are never that simple… 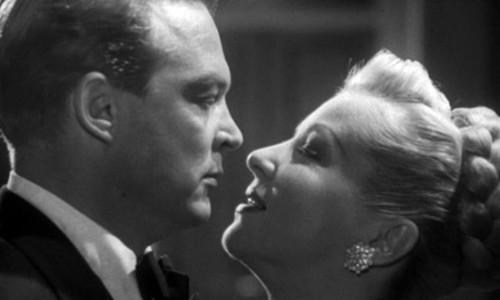 The House across the Lake hasn’t actually dated as much as some of the films that Network have released of late, probably because it mainly deals in relationships between married couples and friends and lovers, something that doesn’t really date all that much, as one can note by studying the likes of Chaucer and Shakespeare. And while it feels more like a filmed stage play than a movie at times it still manages to hold the interest throughout and all the main actors, particularly Sid James, are pretty convincing in their roles.

Network Distributing seems to have done a reasonable job of cleaning up the print, although sometimes the sound is a little flat (probably due to the source material). However, the black and white photography, particularly the on-location lake pieces are nicely atmospheric.

The House across the Lake is probably one of the better early Hammer film productions that were filmed in and around Bray Studios, and it’s surprisingly downbeat at times. Plus it’s certainly worth watching at least once to see how good an actor Sid James was away from the later craziness of the ‘Carry Ons’.

The House across the Lake has been released on DVD and is being distributed by Network Distributing as part of their ‘British Film’ collection. Sadly the only extra on the disc is a stills gallery of shots taken directly from the film and some lobby cards and a couple of posters, one of which refers to the film as Heat Wave.