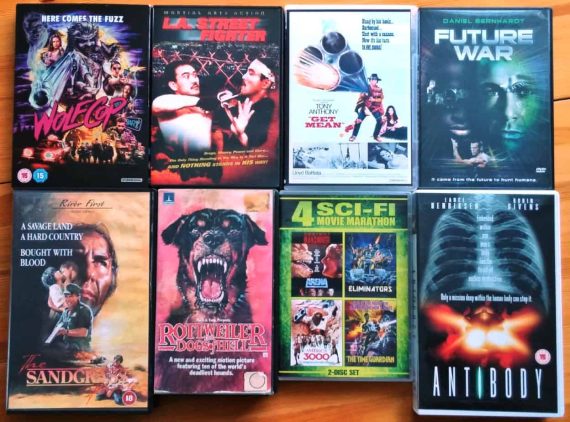 We tried to squeeze one more video weekend into 2014, but ill health and busy schedules prevented it happening. So instead we kicked off 2015 with the 15th (recorded) Weekend of Trash (previous write-ups can be found in the category archive).

So as usual, here are the reviews of everything we watched over a weekend of sleaze, violence and downright nonsense. The reviews are only brief (I’m not about to start writing notes whilst watching movies featuring time travelling dinosaurs) and ratings are largely based on entertainment value rather than quality, so take them with a pinch of salt. I’ve included clips and trailers when possible too. 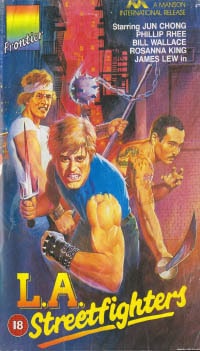 This was an appropriate tone setter for the weekend. Attricious dubbing, zero plot and random fights between gangs of street punks. Unfortunately it’s made up of 95% filler and teeters on the brink between so bad it’s good and so bad it’s unwatchable.

Scenes were incredibly random and largely unnecessary, following our ‘tough’ gang (who get all touchy feely whilst blowing out a birthday cake candle at one point) as they strut around town having fun at the local disco before bumping into a new gang of punks wanting a fight. It didn’t help that the film was so dark and the quality of the DVD so poor that we could never make out what was happening in this largely night set film. Still, some of the fighting was kind of cool and it was enjoyably rubbish for the most part, so it was slightly more watchable than some of the other disappointing movies we’ve picked out at our weekends over the years.

Probably the most memorable scene in the film: 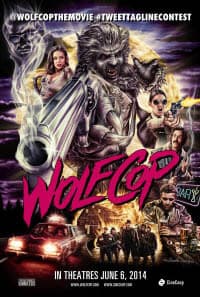 We were really looking forward to this one and it didn’t disappoint. Delivering exactly what it said on the tin, Wolf Cop was a silly, fun action horror movie. I liked the fact that it didn’t wink to the camera too much or plaster the screen with filters to make it look like a ‘proper’ grindhouse movie. Instead it stuck to its guns and focused on delivering a steady stream of jokes, thrills and gore (the transformation scenes were nice and icky). Saying that, the gags don’t always hit the mark, with the script and some of the performances occasionally trying a bit too hard to be goofy or bad taste (did his penis really have to be the first thing we graphically saw transform?).

Visually it’s a bit bland too, compared to some more adventurous B-movies out there, and some of the action scenes were a bit too fast cutting to take in the carnage. Still, by keeping the running time short and purely focussing on delivering a good time with little filler, Wolf Cop is a whole lot of fun and was a fine addition to our trashy movie weekend.

Get Mean (a.k.a. The Stranger Gets Mean) 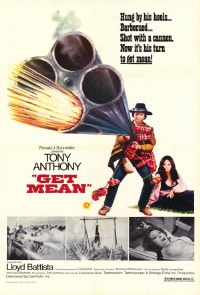 We put this on expecting a badass spaghetti western, but instead got a bizarre tale of a mysterious cowboy stranger getting shipped over to Spain to help a princess win back her country and claim some lost treasure. Or something like that.

This was utterly bonkers. Barbarians worship a horse with gold armour.
We randomly start hearing the hero’s inner thoughts half way through just to squeeze in some more bad gags. Our hero has to endure the ‘Trials of Death’, which have him barking like a wolf at one point. Then he turns black for some reason!

This weird mish-mash of western, comedy and sword and sandals movie is a bit slow in places and doesn’t always hit the mark but it’s a lot of goofy fun. The three villains are all enjoyably OTT in different ways too. One is a panto-level British thespian, another an ultra camp slimeball and one a screaming barbarian. Good stuff. 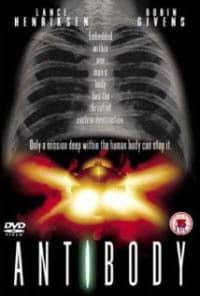 Lance Henrikson stars in this fun straight to DVD take on the Fantastic Voyage/Inner Space idea of injecting scientists into someone’s body. In this case the scientists are joined by a bomb disposal expert (Henrikson) who is there to disarm a detonator implanted in the body of a terrorist. The team have a few hours to stop it before nuclear bombs wipe out Western Europe.

You wouldn’t always realise time was ticking though as the group are rather laid back through most of the film. Its not the most fast paced action sci-fi flick and the script is pretty lame, but it’s enjoyable enough and the effects are better than expected for a film of its budget and age. Lance is just cashing a paycheck but he’s always fun to watch too. It’s nothing special I suppose, but did the trick on a Saturday afternoon. 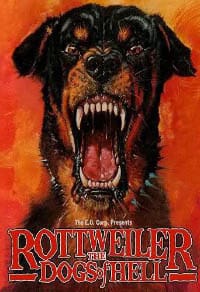 This creature/slasher horror movie sees a truck full of rottweilers, which have been trained to kill, crash in a sleepy American town. The dogs proceed to wreak havoc, racking up quite a body count whilst the sheriff and his buddies try to stop them.

This was a pretty good little horror drama. It could have maybe done with one less side plot and a bit more on screen carnage, but there are a lot of deaths and a fair dose of the red stuff even if it’s just lazily sloshed around. Being originally made to cash in on the 80’s 3D boom, this is full of guns, hands and darts being poked and thrown at the screen too, which adds to the cheesy charm of it all. 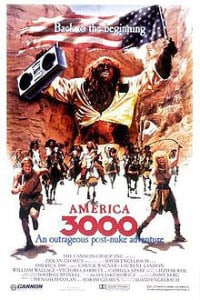 A post apocalyptic action comedy, America 3000 shows us a future world where the powerful and slightly more advanced women (or frauls) live apart from and do battle with men (or pugarts). Over the course of 90 mins they fight with each other and with themselves and make some discoveries later on which could finally bring them together.

We had a lot of fun with this. Its very silly, but knows it and never takes itself too seriously. It may be a bit short on action and excitement, but it’s continuously goofy – maybe not always intentionally, but it worked for us. Food and supplies may be short but all the women seem to be well stocked in hair spray, curlers and straighteners. A voiceover explains the baffling future world throughout, obviously added at a later when the filmmakers realised nothing made a lick of sense. A huge mutant man provides extra daft comic relief too.

With its silly and rather annoying future language and naff fight scenes it’s no genre classic, but we enjoyed ourselves. 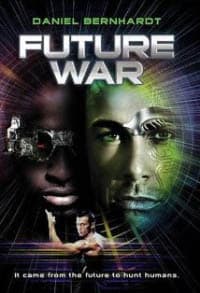 A slave from the future escapes his cyborg captors and ends up on 20th century Earth for some reason. The cyborgs are hot on his trail though with their dinosaur trackers. The slave meets a trainee nun having a crisis of faith and she ends up embroiled in the chase.

This was terrible. The dinosaurs were beyond laughable, the cyborgs all overweight middle aged men (including an aged Robert ‘Maniac Cop’ Z’Dar), nothing ever made logical sense and the film constantly grinds to a halt for some touchy feely religious discussion. The film is also hilarious for most of those same reasons.

So we did have a laugh watching this, but it’s not something I’d ever recommend anyone watch in their own. 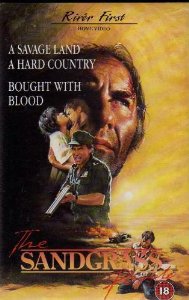 We took a shot in the dark with this one. There’s very little info online and it’s very hard to get hold of (I randomly spotted it in a charity shop). We didn’t even know how long it was as it didn’t say on the box.

Luckily it was a decent film although it was a lot more serious than most of the usual titles we fit into our movie weekends.

The Sandgrass People is set in South Africa and tells the story of Dalmain, a man who gets wrongly accused of murder so goes on the run. When a local tribe helps him, he becomes embroiled in their plight too.

It’s a bit preachy and grim, but The Sandgrass People is a well made, solid thriller/drama. It looks good, making the most of the desolate setting, and is impressively brutal at times. It’s a bit heavy handed and ends rather abruptly but it was nice to finish the weekend off with something of a high standard like this.