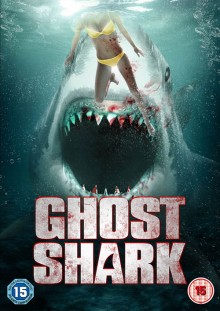 Forget Sharknado, it’s all about Ghost Shark. That’s right, a shark that is a ghost. Or is it a ghost that is a shark? Whatever it is, it’s awesome and it provides 80 minutes of supernatural shark B-movie barminess. When a couple of hillbillies on a fishing trip kill a great white shark with hot sauce (no kidding: hot sauce!) the shark comes back as a vengeful spirit hell bent on killing anyone and everyone. And does it wait years to come back and take its revenge? Nope, it waits all of 6 seconds after being killed by the fiery condiment and reappears as a crap CGI apparition and starts its killing spree. As this is a low budget creature feature there are a bunch of bikini-clad babes, some douche bag dudes and a sozzled crotchety old timer who all band together (for reasons too incomprehensible to even try and describe here) to stop the phantom fish from killing the whole seaside town of Smallport.

While the concept in itself is just B-movie brilliance, a shark coming back as a ghost to kill people, the makers do one better by the shark being able to appear wherever there is water. So this spooky sea slayer isn’t just confined to the big old ocean but can appear in swimming pools, fire hydrants, bath tubs, a bikini car wash (again, too inexplicable to even try and explain!) and in one moment of absolute loony creature feature madness, a water cooler: which sees one unfortunate sod slain in perhaps this year’s best death scene! This is where most of the fun comes from while watching Ghost Shark: wondering how the makers are going to shoe horn in yet another water based scene for the sea spectre to mystifyingly appear in. 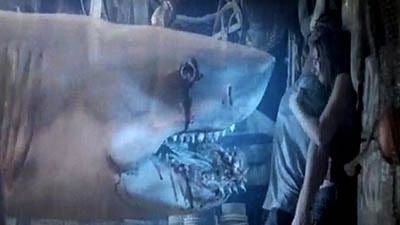 Director Griff Furst, who made the equally bonkers but no less entertaining Arachnoquake (and if you haven’t seen that yet put down your Blu Ray copy of Goodfellas or Dancer in the Dark and go out and purchase it now!) keeps proceedings propelling along at an alarming rate (just in case we happen to stop and go, hey wait this is a load of rubbish), the cast are energetic and definitely in on the joke, the shonky effects add to the charm and, really, what is not to like when a shark (which is also a ghost) leaps from a burst fire hydrant to dismember two annoying kids?

I know this is perhaps as insane as an actual ghost shark but I’m giving this 3 stars! B-movie greatness.