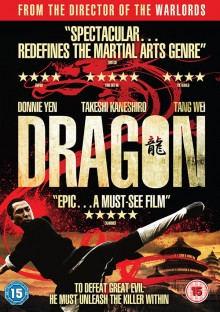 With Jackie Chan taking fewer and fewer leading roles and Jet Li jumping in and out of retirement, it’s Donnie Yen who has become China’s biggest martial arts movie star of the last decade. He’d been in plenty of action classics at the end of the 20th century such as Once Upon a Time in China 2, Iron Monkey and Hero in 2002, but was rarely the leading man. It wasn’t until 2005’s Kill Zone (a.k.a. S.P.L.) that Yen’s star truly shone in the Hong Kong/Chinese movie landscape. Working as action director too, his speed and strength were front and centre in the fight scenes and the intensity of his performance showed that he had more to offer than playing second fiddle to Jet Li or such.

Or at least that’s what most martial arts movie fans say. I finally got around to watching Kill Zone for the first time last week and to be perfectly honest I was very disappointed after hearing all the praise. Yen’s character is criminally underdeveloped, although the fight scenes are fantastic there are very few and the drama which replaces them is clumsy, poorly delivered and melodramatic. In general, although I think Yen is an exceptional action choreographer and a decent actor, I’ve not been blown away by any of the films he’s headlined over the last ten years to be honest. Even Ip Man, which also garnered a fair amount of praise, was good but not great in my eyes. Nevertheless, I still get excited about his latest releases and here we are with Dragon (a.k.a. Wu Xia), which infuriatingly has taken two years to make it to UK shores. Thankfully my good friends over at Metrodome took up the gauntlet and are releasing it on DVD next week after a short theatrical run back in May.

Dragon sees Yen play Liu Jin-Xi, a man living a simple and peaceful life with his wife and two children, working in a paper mill to make ends meet. When a notoriously violent criminal and his accomplice come into town and Jin-Xi manages to ‘accidentally’ kill them, Detective Xu Bai-Jiu (Takeshi Kaneshiro) smells a rat. No ordinary man could fend off such powerful foes, so he follows Jin-Xi around for a couple of days to try and find out who he really is. As Bai-Jiu discovers more than a few skeletons in Jin-Xi’s closet, this past comes back to haunt him and the calm family man must face up to his former self.

This bucked the trend for me standing against the grain on Yen’s recent output as I liked this a lot. It won me over quite quickly too. Opening with a fun action scene put me in the right mood, but it really impressed when the scene was revisited soon after. Bai-Jiu dissects the fight, giving his theory of what really happened. He’s actually placed into flashbacks of the scene as a ‘spectator’ whilst he unravels everything move by move. The action slows down and we see things from a slightly different perspective, showing how Jin-Xi was really in total control of the situation which seemed like mindless grappling before. As well as some dynamic camera movement and the aforementioned slow-motion, there are animated paintings showing what damage was being caused, making for a slick and inventively stylish scene. 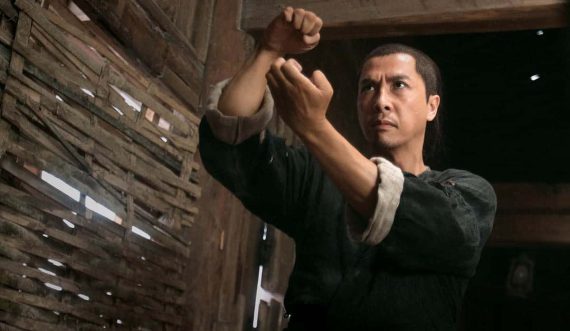 This slick presentation continues throughout with a look that may lack the beauty of Zhang Yimou’s films, but is a vast improvement over most cheap-looking action movies from Hong Kong. The clever and more unique twists from the style of that early scene don’t really fully re-emerge later on, but the standard remains high.

The action scenes are incredibly well choreographed too, as is to be expected from Yen, with no noticeable CGI and very little wire-work getting in the way, despite the skills of some of the characters’ veering into the world of the fantastic. Unfortunately there aren’t many full on fight scenes in the film, just three or four, which might put off those looking for an action packed fight film. Luckily, the film is solid enough elsewhere to still be a worthwhile watch.

In the first half, the film works very well by keeping you guessing about Jin-Xi’s true identity, drawing similarities with A History of Violence, and the audience’s sympathies and expectations are played with enough to keep you gripped. In the second half, once the truth is out, the story becomes a little more bog-standard, but it’s performed and directed with enough conviction and skill to pull it off (plus the action kicks in at this stage). A bizarre twist near the end which pays reference to a kung-fu classic caught me totally by surprise too which kept me interested.

It may sound like feint praise calling aspects of the film ‘solid’ and ‘slick’ rather than ‘great’ or ‘beautiful’, but a consistently well-produced martial arts film can be a rare thing and by never really putting a foot wrong, even if it never launches into the stratosphere, the film is very easy to recommend. It may not be as action-packed as I’d have liked, but Dragon is still highly entertaining whilst offering enough narrative and dramatic interest to keep it from being mere mindless trash.

Dragon is out on 26th August in the UK on DVD, released by Metrodome Releasing. Picture quality is great and there are two audio options, stereo or 5.1. I watched it with 5.1 and the mix sounded excellent. There is only one special feature of note (after a trailer), and that is an interview with Donnie Yen on the making of the film. This is great, but unfortunately very short at only a little over 6 minutes.