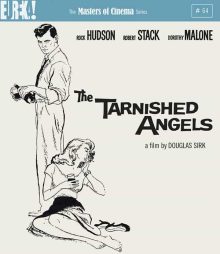 Melodrama used to always be a dirty word in my mind. I never thought of it as a style or genre, but rather a criticism of over the top performances or soapy narratives. For this reason, a large proportion of Hollywood dramas from the 50’s have passed me by, including the entire back-catalogue of Douglas Sirk, one of cinema’s most famous and respected purveyors of the form. Over the years though my tastes have broadened and after becoming a huge fan of the family dramas of Ozu (which lack the Hollywood melodrama bombast but explore similar themes) I figured it was time to open my eyes to what was going on over the pond at a similar time.

The Tarnished Angels was one of Sirk’s later features, produced in 1957 after a string of commercial successes through the rest of the decade. Like all good melodramas it surrounds a complex web of relationships, with journalist Burke Devlin (Rock Hudson) becoming fascinated by the lives of a family making a living on the airshow circuit and ultimately falling for and trying to ‘save’ wife LaVerne (Dorothy Malone). You see, LaVerne is hard-done by her husband Roger Shumann (Robert Stack). A former WWI fighter pilot now racing for peanuts, all he truly loves are his planes and his marriage was simply something he ‘won’ in a dice game after LaVerne got knocked up, with the ensuing son becoming a lonely figure who is dragged from show to show. Also tagging onto the family is faithful mechanic Jiggs (Jack Carson) who is smitten by the leggy blonde LaVerne as well as the talents of Roger.

When Roger crashes his plane in a race he resorts to desperate measures to get his hands on another from an old rival and this prompts Devlin to try to steal LaVerne away, but things don’t quite go to plan. Reignited passions followed by tragedy muddy the waters and threaten to tear everything apart.

The first thing that struck me when Tarnished Angels opened was that it was in black and white. The format doesn’t bother me of course and many films from the 50’s were still shot in monochrome, but I was surprised because I had always heard of Sirk’s bold use of colour and this was one of his later films. Indeed, most of his work in the 50’s was in colour, but I guess this being a period piece (set during the depression), he decided to hark back to cinema of the time.

I needn’t have let this fact concern me though as the film looks stunning regardless of the lack of colour. Sirk’s use of unconventional yet meticulously composed framing, high contrast lighting and camera movement, all shot in glorious cinemascope, makes for a true feast for the eyes. It has a noir-ish, expressionistic feel at times which I really wasn’t expecting but adored. The plane race sequences are effectively shot and edited too, remaining exciting due to a lot of real life footage of stunt pilots. The back-projected shots in the cockpits are fairly well done too for the time, perhaps aided by the use of the black and white photography.

Pretty cinematography and action scenes were always going to win me over though, so where did the melodrama sit with me? Well it sat rather well. All of the characters are so damaged and flawed that it makes for a dark and fairly complex tapestry of misguided love, obsession and cruel intentions. LaVerne is fought over, tossed around and abused, but is no gilded rose either. Malone smoulders in the role and her scenes with Hudson, although hardly subtle, have a crackle to them with a hint of uncertainty which keeps you guessing as to what each character truly wants.

The film does get a little slushy in the final third and loses momentum a bit, but this is handsome Hollywood class at its best with an intriguing collection of broken characters that prevent it from becoming mere gloss.

The Tarnished Angels is out on 26th August in the UK on Blu-Ray, released by Eureka as part of their Masters of Cinema Series. The picture quality is superb as is the norm with Masters of Cinema’s releases. I didn’t find the soundtrack quite as impressive though with noticeable noise reduction where hiss would appear alongside dialogue but cut off in between. The music comes through nicely though.

There are a wealth of special features with the release, including a feature-length audio commentary by film critic Adrian Martin. This is very academic and analytical, but remains listenable due to Adrian’s clear love of the film and a steady pace to his delivery. You also get a few substantial featurettes. ‘Talk About the Business’ is an interview with supporting actor William Schallert who is a great speaker but had little to do with The Tarnished Angels unfortunately. ‘Infernal Circle’ is an interesting interview with critic Bill Krohn who digs deep into the film and the work of Sirk. ‘Acting with Douglas Sirk’ takes excerpts of interviews with the cast and crew from an older German documentary. This is full of interesting takes on the film and anecdotes and is well worth a watch.

Added to these you also get a music and effects track as well as a trailer for the film and, last but not least, one of the usual Masters of Cinema booklets which are always the equal of any documentary.