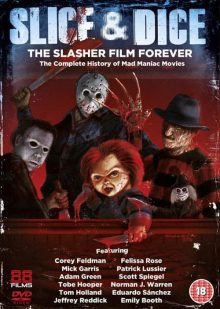 There has been a minor surge of celebratory film-focussed documentaries over the last few years. I’m not sure of the correct ‘label’ for them, but I mean the type of documentary that plays as an enjoyable nostalgia-trip with a ‘fan-boy’ feel. We’ve had Not Quite Hollywood presenting the joys of Ozploitation movies, Machete Maidens Unleashed looking into the Filipino genre film industry and several celebrating the work of a single director/producer/artist, such as Ray Harryhausen: Special Effects Titan and Corman’s World. I’m a bit of a sucker for these types of films, so I track them down whenever I can – who doesn’t like a trip down memory lane or a chance to find some lost gems within a genre you love?

So I of course leapt at the chance of reviewing Slice and Dice: The Slasher Film Forever. This is a documentary by Calum Waddell and editor/animator/producer Naomi Holwill (who have been steadily churning out featurettes for DVD/Blu-Rays for the last few years) which, as the title suggests, looks at the history and continuing love for the slasher film. We are taken through the birth of the sub-genre with films like Psycho, Peeping Tom and Bay of Blood, then into its refinement and boom in the late 70’s/early 80’s with the release of Halloween and Friday the 13th and finally looks at what’s on offer now and where the films are heading. On top of the history, the interviewees discuss the essence of what makes a slasher film and why they love them.

And what a fine roster of interviewees it is too. On top of genre legends like Tobe Hooper, you get known faces like Corey Feldman, a number of talented up and comers like Adam Green and home-grown genre directors like Alex Chandon. It’s a nice mix and Waddell clearly knows who to call upon, rather than making the obvious or uninformed choices some of these ‘lite’ documentary makers make when picking the on-screen speakers. They all know their stuff (except maybe Feldman, but he makes up for this with charisma) and their passion for the films is clear.

However, the film didn’t quite win me over in the same way some of those aforementioned documentaries did. All the ingredients are there – decent interviewees and retro clips from slasher movies throughout the decades assembled by someone that clearly loves the genre. Unfortunately it never felt like it made the most of its elements. My main issue was with the content itself in terms of questions asked and answers presented. These types of documentaries are usually pretty fluffy and don’t particularly analyse the subject in depth or criticise it too harshly, but Slice and Dice felt that little bit too light for me. Especially considering the brief running time, it spent too long repeating itself. In the overly lengthy sections discussing slasher film tropes for example, many of the interviewees give the same answers, meaning the film doesn’t move along as it should into any more interesting aspects and I got a little bored of it at times. It generally brought me back fairly quickly, I wouldn’t say I was fully bored so to speak, but I got a bit fidgety half way through, which shouldn’t happen in a 75 minute film.

The clips got a bit repetitive too. I loved the fact that some less well known films were given a showing (largely due to the support of distributors 88 Films I imagine), but there wasn’t really enough variety, with the same films cropping up again and again. The film had little to no budget so I guess gaining rights was never going to be easy and I wouldn’t like to criticise the filmmakers too much for not getting hundreds of clips into the film, but it did get a bit much watching the same 20 trailers flash by. To make up for the lack of film rights the filmmakers do sensibly use a lot of posters and stills though which are still nice to see. 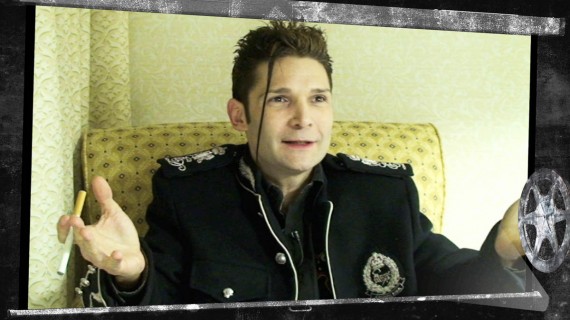 The biggest sign for me that I wasn’t as engrossed as I’d have hoped was my activities after watching the film. After watching Special Effects Titan I instantly opened my laptop and ordered the Sinbad collection online. After watching Slice and Dice I just switched it off and went on with my evening. I think in focussing on the more obvious history of the slasher movie and going over its tropes of which I was already aware, it never opened my eyes to anything I was desperate to dig out. So for a film buff and collector like myself it didn’t have the impact I hoped.

That said, you must read on to my description of the DVD set as a whole though, as the full package actually made up for what I felt the documentary itself lacked.

Slice and Dice: The Slasher Film Forever is out on DVD in the UK on May 13th, released by 88 Films.

As I hinted at earlier, this is a great set, which actually improved on the main film for me. The main extra on offer is another horror sub-genre documentary included on a second disc. Called Don’t Go into the Backwoods and put together by the same duo, this looks at backwoods horror films such as Texas Chainsaw Massacre and The Hills Have Eyes. It’s much of the same in terms of presentation, even including a number of the same contributors, but to be honest I preferred this shorter 37 minute piece. Maybe it’s the brevity which worked in its favour or its possibly stronger interviewees (a couple of critics add some more subject knowledge and big names such as Tony Todd and Lloyd Kauffman are fun to see), but I found this more interesting overall. The graphics which I felt were a bit heavy handed in the feature film are toned down here too.

The set also includes plenty of interview outtakes (not in the comedy sense), some of which I found more interesting than what was included in the film. In this outtake batch the contributors spend more time talking about their own work and experiences which I found more fascinating than their thoughts on slasher films in general. I can see why they weren’t included though as it would have taken the documentary on several tangents. A Q&A with James Moran and Norman J Warren included in the extras works well in a similar way too.

Another great addition to the DVD set is a collection of over 20 classic slasher film trailers. These are fun to watch on their own, but director Waddell and author friend Justin Kerswell provide a commentary over them which is excellent, full of interesting facts about the films and their opinions on them. The two also provide a commentary for the full documentary itself which again is a must-listen. This provides some more in-depth discussion on the genre from two of its biggest fans rather than just a look at how the film was made.

Finally to round up the set you get some home-video style footage from three of the documentary’s various premier screenings which are nice, but nothing special, a music video which didn’t do much for me and 88 Films’ usual Trailer Park teasing their upcoming and current releases.

So, whilst Slice and Dice itself didn’t do much for me, the 2 disc DVD set it is presented in is a must buy for horror aficionados.

DVD Set as a whole: