After a failed assassination attempt on the US President, the government retaliates based on intelligence suggesting the attack came from Venezuela. Newspaper journalist Rachel Armstrong (Beckinsale) is tipped off that the evidence was flawed and that the retaliation may not have been justified. Armstrong is backed by Capitol Sun-Times editor Bonnie Benjamin (Bassett), much to the chagrin of the newspaper’s lawyer Avril Aaronson (Wyle). In publishing her findings, and potentially bringing down the administration, Armstrong reveals the name of CIA operative Erica Van Doren (Farmiga).

As Van Doren’s name must have been leaked by a government employee, therefore committing treason, the administration appoints a special prosecutor, Patton Dubois (Dillon), to find the source of the story. Armstrong though, will not reveal her source, exercising her first amendment rights, even when faced with the Grand Jury. Her employer then takes on high profile attorney Albert Burnside (Alda) to fight Armstrong’s case. Dubois takes the case to District Court, where again Armstrong refuses to name her source. As the interests of national security trump first amendment rights, Armstrong is jailed for contempt.

As Dubois will not back down in his hunt for the source, Armstrong languishes in jail. Her resolve remains steady as her story goes cold and her husband (Schwimmer) and young son grow distant. Meanwhile, her source remains anonymous. How far is Armstrong prepared to sacrifice her personal life and freedom for her principles?
Nothing but the Truth is a tense political/legal drama inspired by the case of journalist Judith Miller, jailed in a not dissimilar case in 2005. Premiering at the Toronto International Film Festival in 2008, Nothing but the Truth missed out on a theatrical release when the distributor filed for bankruptcy. It has been available on the home market in the US since 2009. 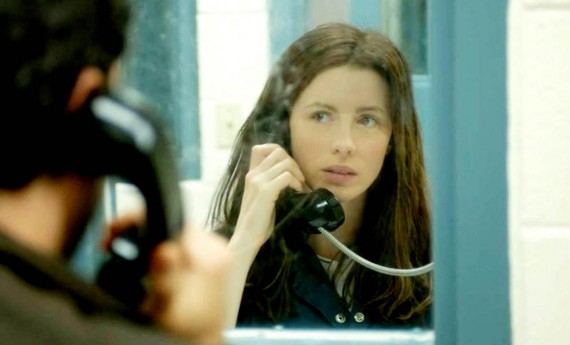 Writer/Director Lurie has provided two very strong female characters in Armstrong and Van Doren. Each convincingly switches from soccer mom to hardened professional in a heartbeat. There are a couple of stand out scenes in the first quarter of the movie when these characters confront each other. Notable male characters are attorney Burnside, revealed to be more complex than the grandstanding showman we are introduced to and Dubois, a laid back, reasonable guy at the top of the movie, subtly switching to become ruthless and relentless in his pursuit for the source.

The intention for theatrical release explains the solid cast here. The strong female roles are ably handled by Beckinsale and Farmiga. The latter being particularly good when it comes to portraying a stone cold CIA operative. As Burnside, Alda puts in a noteworthy performance as you can see the inner turmoil his character is in when determining the best course of action for his client.

The plot seems simple enough, a political drama (I would not go so far as to call it a thriller) that turns into a courtroom drama. It is, however, the human drama that is at the heart of this story. The choices we make, our convictions and our resolve are all examined with the emotional as well as practical repercussions played out before us.

The fact that Nothing but the Truth did not get a theatrical release does not mean that it did not deserve one. Unfortunately it also means it has not had the promotional bells and whistles that come with a theatrical release and therefore the publicity it would have received. Nonetheless, this is a human story that merits attention.

Nothing but the Truth is released on 20th May 2013 on DVD and Blu-Ray.