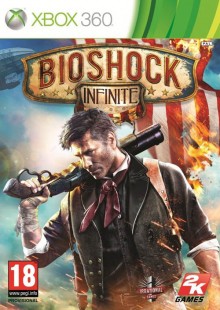 Having been based underwater in Rapture for its first two incarnations, Bioshock has taken to the skies with Bioshock Infinite and the new setting certainly hits the heights.

The setting for Bioshock Infinite is the floating city of Colombia and the year is 1912. How this sort of city was made possible 101 years ago we don’t know, it just is. The idea behind the city was to escape the United States below and the founder of the city, Zachary Hale Comstock, created a sort of cult and began to refer to US as ‘the Sodom below’ and that Colombia was a sort of modern day Noah’s ark.

Into this world ex-Pinkerton and soldier Booker DeWitt is set to rescue a young woman, Elizabeth, from a tower, I wonder where they got that idea from?

As is so often the way things aren’t quite as they at first appear. Elizabeth has some special powers and in fact Booker is not only handy with the weapons that are available to him, he has other tricks up his sleeve, well in his hands actually.

These are things, powers I suppose, called vigors. They are the special powers in Infinite and you learn new ones as you go. For reasons that are never explained they are powered by salt, yes you read that correctly – salt. We’re not sure if this your common table salt that you would put on your chips, I don’t think so as it comes in some very fancy blue bottles. 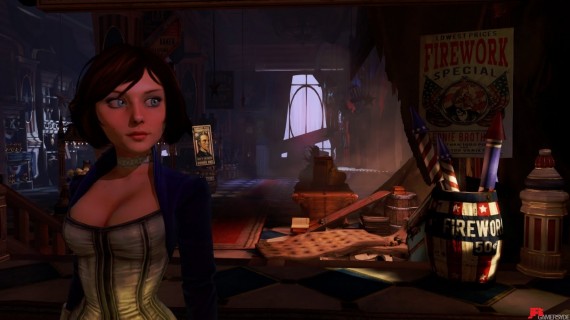 Anyway, these vigors give you abilities such as being able to possess your opponents and turn them into allies, Devil’s Kiss is about throwing fire, Murder of Crows enables you to conjure up some birds to do your dirty work for you and several more.

What is slightly confusing is that these are controlled using the left trigger. This means that the left trigger isn’t the sights for your weapon. What this meant was that I kept on using up my salt when all I wanted to do was bring up the iron sights on my pistol.

You can choose which vigor you want by using the left bumper and you do need to tailor them to your target. This is because at various points you meet some uber-baddies. These can be fire throwing nutters who are immune to Devil’s Kiss, or a kind of crowman who is immune to Murder to Crows. Why these specials appear from time to time is never explained.

One thing is certain and that is that Bioshock Infinite looks great. It has a real cyberpunk feel to it and the whole city has a fantastic overall look and the level of detail that developer Irrational Games has gone to has to be commended.

A possible criticism of Infinite though is that it is rather linear. With such a huge city you could be forgiven for thinking that you can go on a bit of a walkabout, you can’t.

As you hop from the skyrails that intersect the city you can drop in and out of the occasional house, but other than searching desks, boxes and barrels there isn’t much to do in them and you are soon back on the track.

When a game gets as much pre-release hype as Bioshock Infinite did it is often hard to live up to the promise, however, it has and is an excellent game and certainly one worth investing in.