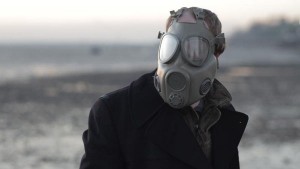 It’s been a while, but we’re back with another Short Film Showcase. This time it’s a poignant post-apocalyptic story set in the world created for a feature film that the producers are currently developing.

The film can be found at the bottom of the page, but to find out more, here’s what the film’s producer James Heath had to say:

Our short film ‘Choke Mate’ was made as part of our Kickstarter campaign for the feature Fim ‘The Fitzroy’ (www.thefitzroy.com/ks)– a short film made in (just over) 48 hours from suggestions by our supporters and the internet at large.

We first called out to our audience for ideas for the short film. We had some incredible suggestions for the original idea, which were just not possible or quite with the original rules which were:

1) It must be set in one location.
2) The story for the film should be no longer than 2 minutes in length. (though in the end we broke this rule ourselves!)
3) A gas mask must be involved in the story.
4) Most importantly, the idea must be set around the post apocalyptic world of ‘The Fitzroy’. On the sub, off the sub, during the film, before it, whatever you like – check out www.thefitzroy.com/ks to better understand the world.

We received around 50 ideas and put our favourite two to add to our original three, and put these to the fans:

1) Two female hairdressers design a hairstyle to be worn with a gas mask
2) As an air raid siren sounds two people play chess for the last gas mask.
3) In an office building a council inspector looks to hire his replacements.
4) A salesman tries to sell his last gas mask just before a nuke goes off.
5) On a beach a young man is about to propose but everything goes wrong!

The overwhelming winning idea was: ‘As an air raid siren sounds two people play chess for the last gas mask’

As well as the original idea we got our audience to suggest locations, props and titles and we put our favourites to public vote on Facebook. These were the winners:

We called out to cast and crew across social media. We received an overwhelming support and got a fantastic team together.

To make it achievable within a tight time scale, with only having about 7 hours of daylight we got to location for sunrise on Saturday morning. It was shot on the Canon 5D for no money, on location near Southend in Essex (around an hour East of London) at Chalkwell Beach. It was a freezing day, but we got lucky with clear skies all day. Everyone worked through lunch to get the shots needed, and we pushed the 5D to its limits shooting the last shots (which was in fact the opening scene of the film) after sunset – it still matches up great!

We had a rough edit by Saturday evening and locked the edit Sunday morning ready for VFX and sound design.

Although it is set in ‘the world’ of ‘The Fitzroy’, it turned out to be tonally much darker – you have been warned.

It was a full-on weekend pulling it all together. From the writing and the shoot to the editing, grade and mix – it was hard work but great fun.

If people like the film they should certainly check out our Kickstarter campaign www.thefitzroy.com/ks where we’ve just got over 50% of our target and have today been named Kickstarter project of the day. We couldn’t be more thrilled!