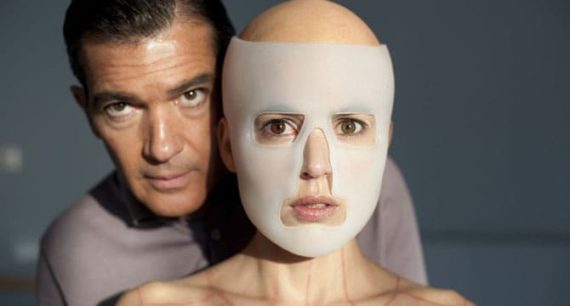 If you haven’t yet had the immense pleasure of seeing Pedro Almodovar’s latest film “The Skin I Live In,” firstly, go and see it. Even by the standards of one of the world’s finest filmmakers of the moment, it’s damn extraordinary. Secondly, don’t read another word of this column. In order to do justice to this film in discussion I’m going to be giving away some pretty major spoilers, which if you intend to see the film will definitely mar your enjoyment of the experience. Spoiler alerts are, as always, implicit in this feature: but that goes doubly so with this week’s Film for Thought.

One must first of all confess to having an ever so slightly apathetic relationship with Almodovar’s oeuvre, in much the same way that most major critics in the UK and Europe have this unspoken but tangible apathy to the Spanish maestro’s films. The problem with Almodovar, if problem is the right word, is that he’s so consistently excellent in his work that it’s pretty much taken as given that each new film is going to be impressive and worth seeing. He’s so good that everyone has forgotten precisely how good he is, merely because he has quietly and relatively prolifically been, for about a decade, making exquisite films which fail to stand out beyond a widely accepted pattern of brilliance.

“The Skin I Live In,” however, does stand out: not particularly because it’s superior in quality to Almodovar’s twenty first century offerings (I would argue that it is superior, but not substantially enough for my purposes here), but because it hearkens back to the daring edginess and bold risk-taking of Almodovar’s much earlier films. This relation back to the early films is also evident in the director’s re-teaming with Antonio Banderas, the Spaniard’s former “Chico” turned distinguished and respectable elder statesman, but what this film has in abundance is the intelligence and directorial wisdom Almodovar has acquired since those first works. Here he is less flamboyant and more measured, less avant-garde but equally more confident: Almodovar merges subtlety with an evocative and provocative narrative which succeeds at establishing a premise in which we are prepared for the creepy and the disturbing, but gradually reveals a shockingly terrible reality that surpasses even the darkest ideas we could initially have anticipated. The old and the new are in balance, and the already matured Almodovar has taken a giant leap into exhilarating new territory.

The film has by many been likened to the “Frankenstein” myth, which to me seems woefully inadequate. Whilst superficially it satisfies with regard to the creation of a mutated human being, and serves to illustrate the analogy of the dangers of a genuinely insane scientist possessing the means (a laboratory) and the motivation (obsession, vengeance) to pursue a terrifying god-complex, the comparison ignores the deep well of underlying thematic richness which flows beneath the film’s glossy, ravishing visual veneer like blood flowing through the veins beneath the skin. A more interesting analogy would be with Hitchcock’s “Vertigo:” both films chart the progress of a man’s obsessive desire to recreate the likeness of a lost loved one onto another human being, and the resultant projection onto the unfortunate doppelganger of some twisted and repressed erotic longings. In terms of the film’s presentation of a darkly warped family unit seething with sexual, violent and psychologically demented tensions, it recalls the great Spanish playwright Lorca’s “The House of Bernarda Alba.” In this play, the fearsome eponymous matriarch rules her numerous daughters with a frightening physical brutality and mental autocracy, and tragedy ensues when her youngest daughter defiantly pursues her lust for a local boy. In “The Skin I Live In,” Marisa Paredes plays the housekeeper of Banderas’ Dr Ledgard’s mansion, but she is also the mother to him and to Zeco: an adulterer and rapist whom Ledgard murders, unaware that the man is his half-brother. Following the reveal to the captive surgical patient Vera of this hidden family secret, the housekeeper professes that insanity runs in her entrails. One questions what kind of madness she bred in her two sons, who are both dangerously mentally and sexually deranged men: and it is not hard to later read the authoritarian vengeance fantasies inflicted by Banderas on those who killed his wife and daughter as similar manifestations of dictatorial patriarchal absolutism. Whatever else the film has up its sleeves, in suppressed incestuous desire and sexual violence as a revenge practice, is completely its own.

Almodovar’s direction here, as I earlier hinted, is much more controlled and classical than is typical of his previous work: in many ways the most appropriate and enlightening way to describe Almodovar’s style here is clinical. At first we read this as a reflection of the clinical analysis and careful scrutiny Ledgard employs as a surgeon revolutionizing the genetic make-up of human skin, but it later becomes clear that Almodovar’s direction is a subtle but effective suggestion of the importance of what lies beneath the film’s visual skin, if you’ll pardon the inevitable pun. The apparent simplicity of the direction keeps a troubling and vast pit of thematic atrocities below the surface, and thus the audience is rewarded by a rich and intense experience which is constantly controlled and never becomes an unbearable assault upon our senses and sensibilities. This idea of the calm exterior disguising the madness within is also characteristic of Banderas’ performance in particular: the actor is an emotionless blank slate, a sophisticated and suave Clooney-esque distinguished older male, but beneath this superficial veneer lurks a horrifying madness composed of vengeful wrath, inclinations towards necrophilia, and a deeply ambiguous and emotionally divorced sexual orientation.

It is what is under the skin which is most remarkable about the film in terms of the narrative also: not just referring to the gradual disintegration of what is established as a hostage drama with science fiction overtones into a profoundly original and daring psycho-sexual suspense thriller, but also to the way everything in the film acquires a double meaning, and that in order to survive the surface must never display the reality of what lies beneath. In penetrating the secluded existence within the Ledgard mansion in a carnivalesque tiger outfit, the bestial and violent passions of half-brother to the protagonist Zeco are as outwardly obvious as they are present in his behavioral make-up: such an overt physicalisation of his true nature spells certain early doom for the character in a world where suppression and internalization reign, ironically for characters so fixated upon the skin and external appearance. Indeed, the dichotomy between the skin and the internal is so traumatic for two characters that they yearn to case all excessive layers away. Ledgard’s disturbed daughter Norma in her mental illness desires to throw her clothes away, which creates the conditions for the event which precipitates her suicide. Vera, the once male Vicento and perpetrator of the fatal incident in Norma’s life, cannot stand the idea of wearing clothes and yet is repulsed by her own artificial skin, and thus can only wear a skintight outfit which hides her shame, in every sense of the word. Indeed, the psychological trauma of clothes is two-fold for Vera: they represent the outward reality of her/his enforced gender transformation, and remind him/her of his former life as an assistant in his mother’s clothes shop. A dazzling red dress, the apple of any normal woman’s eye, bitterly mocks Vera/Vicento’s return home having escaped captivity as it sits in the window of the mother’s clothes shop. Almodovar’s play upon double meanings creates the conditions for mistaken interpretations which keeps the audience alert and mesmerized. Vera’s infatuation with Yoga is at first mistaken for a spiritual fascination with preserving the core of her true identity, yet it is actually purely a means of engaging Ledgard in an erotic seduction which will lower his defenses and render him vulnerable to attack. What is ultimately most troubling and brilliant about the film are the many unaddressed psychological disturbances which are left brimming tantalizingly just below the film’s skin, nothing more so than the actual implications of Ledgard transforming his daughter’s near-rapist into the image of his adulterous deceased wife. It transcends mere revenge to become erotic obsession for a horrifically burned corpse and sexual identification with the erotic possessor of the daughter Ledgard could never emotionally engage. The complexities are too multitudinous to even begin to contemplate here.

Any great film is ultimately judged in terms of what is going on beneath the superficial layer of a film’s narrative and visual composition. But few make such an important point of this fact as Almodovar does in the quite remarkable, ravishing, mesmeric and breathtaking “The Skin I Live In.”