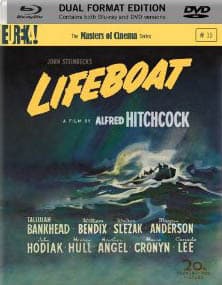 When I was first getting into films as a young teenager, Lifeboat was always one of my ‘go to’ titles when I wanted to impress people with my knowledge and appreciation of film. Back then I only tended to watch the Casablancas and Gone With the Winds of the film world, I rarely ventured beyond ‘the canon’, so I felt like I was unlocking some hidden gem when I discovered the relatively unappreciated Lifeboat. I can remember liking the film a lot and for the decade or two that followed I’ve always brought it up in Hitchcock conversations as his ‘underrated classic’. Of course it’s not actually the most rare of films, but it does tend to get pushed aside in favour of titles like Psycho, Rear Window and Vertigo. These and many other of Hitchcock’s bonafide classics are rightly worthy of their status, but I always felt this needed a little more recognition. Well, I haven’t actually seen the film since those early days, until the fine people at Eureka offered me the chance to review their meticulously restored Masters of Cinema edition. Of course I jumped at the chance and have finally settled down with the film that had stuck with me for over half of my life, so what do I think of it now?

For those of you that haven’t heard of Lifeboat, it’s a film that Hitchcock produced for 20th Century Fox during the Second World War in the first few years of his move to the USA. With David O. Selznick leaving producing duties to help with the war effort, Hitchcock saw his chance to make a picture on his own terms, so he came up with the story behind Lifeboat. This idea was then brought to John Steinbeck to produce a script, which was later adapted by Jo Swerling & Ben Hecht (uncredited). The film is about the rag-tag group of survivors of a ship torpedoed by the Germans during the war and how they cope together on a lifeboat as it drifts across the ocean, hopefully towards rescue. The waters are further muddied however by the arrival of one last survivor, a German from aboard the very submarine that put them in this situation. 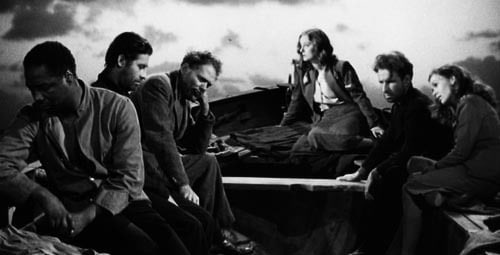 The film is one of Hitchcock’s first attempts at a ‘single-location’ movie. We never leave the ocean and the camera only leaves the boat itself in a long opening shot that shows the ship’s funnel sinking underneath the waves. With his relative freedom he fancied a challenge and that he certainly got, having all the characters in such a close vicinity to one another as well as shooting on a moving set with water splashing over everyone and everything (in a studio of course). The director would give himself similar constraints in the future with Rear Window and Rope, but he knocked it straight out of the park with this one.

Keeping plot minimal, instead focussing on the characters and scaling back the tension (a little), it’s not your typical Hitchcock film, but it certainly has his stamp on a lot of it. As well as a cleverly incorporated cameo (which none of his films can be without), the director shows off his mastery of the craft by managing to shoot such a small space with a different shot each time. There aren’t many flashy angles, but the handling of segments such as the amputation scene are key evidence to his genius and the film never looks or feels boring.

Speaking of which, the film rockets along, despite its limitations. The audience is always kept one step ahead as we learn new twists to each of the characters, especially the mysterious German, Willy (Walter Slezak). Hitchcock also makes great use of sound, in using a technique that he was to repeat years later in The Birds. Lifeboat doesn’t have a score (other than over the opening sequence), which forces the sound and situations to accentuate the drama. Fluctuations in the weather are used for any peaks, as the waves build and the rain hammers down whenever patience wears thin between the tired and thirsty crew. It’s a contrived and blunt technique, but it sure as hell works. As does the sharp and witty script. 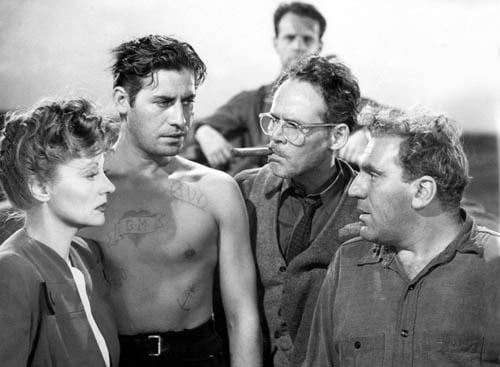 What makes it an interesting film beyond mere entertainment value though is its theme of prejudice. For a mainstream title released during the war, it paints a surprisingly multi-dimensional picture of its German character who can occasionally be sympathised with (this was one of the reasons it wasn’t as successful at the time). The one African-American character, Joe (Canada Lee) isn’t given as much screen time as the others, but the film is surprisingly PC for the time in its attitudes towards race, other than a couple of minor details (their initial nickname for him is ‘Charcoal’, for instance).

It’s not the fact it isn’t racist that makes it interesting though – it’s the politics on board the boat and power shifts that keep the story moving along. The various ways in which the Allied crew deal with the ‘enemy’ and how these develop is key too. The culmination of this is very powerful, bringing the film to an almost perfect conclusion, although a tacked-on addition spoils matters somewhat, bringing a clunky propagandist slant at the last moment.

This misstep at the end as well as a couple of dodgy accents and scenes of ‘madness’ aren’t enough to totally derail the film though. It’s a wonderfully entertaining and thought provoking chamber piece, given the cinematic treatment by the master himself. Yes, I prefer a handful of Hitchcock’s other films, but Lifeboat is still the underrated classic I held dear as a teenager.

Lifeboat is out 23rd April on Dual Format Blu-Ray & DVD (as well as a swanky steelbook edition) as part of Eureka’s Masters of Cinema series. As is to be expected of the label, the transfer/restoration is fantastic. Video and audio are crisp and clear without looking or sounding doctored.

There are a healthy bunch of extras too. Included is a 20 minute documentary on the making of the film, which is packed with anecdotes and background on the film’s production. Also fascinating is a 12 minute excerpt from the famous interview Hitchcock gave to Francois Truffaut discussing the film and his work during the war. On top of this we get two of Hitchcock’s little seen French language shorts made in this period, Bon voyage and Aventure malgache, which are both worth a watch, if not quite at the level of his feature film work of the time. These have been well remastered too and look great for such rare films.

Finally, we get a 36-page booklet, which is brilliant as usual, loaded with essays and archival imagery.