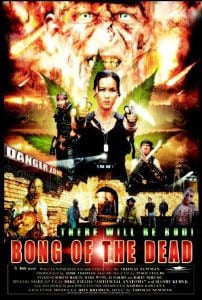 Sitting here and reading this review, you wouldn’t think that, with a name like ‘Bong of the Dead’, that this is one of the hardest films I’ve ever reviewed so I’m just going to go with the flow and just write exactly how I felt about the movie and then tell you why I thought it was one of the hardest films to review. Bong of the Dead was horrible by all rights. The story was lacking, the characters were nothing, the dialogue was terrible but the only thing that really delivered was the action scenes that made you squirm and laugh at the same time and the special effects. The story is about two stoners who use zombies as fertiliser to grow weed. That is it. People who love Cheech and Chong and Harold and Kumar may like this because the movie is absolutely crawling with stoner dialogue such as “I am so high right now, I can’t feel my legs” and “This is some good sh!t” and jokes to do with marijuana use. However, for the zombie lovers, like myself, avoid this one by all accounts. Now you’re probably wondering “Why would I avoid a movie called Bong of the Dead for?” and the reason is because the movie properly kicks in almost an hour into the movie, and the movie is about one hour and twenty minutes. 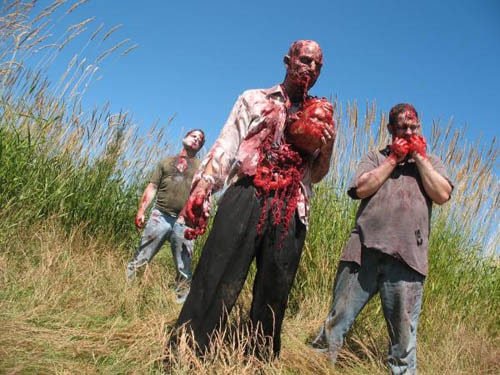 The dialogue itself wasn’t good either because it tries to be funny but in the end, fails. It does try to be funny but it feels too forced. Harold and Kumar do it better. The performances weren’t exactly memorable but for a low-budget film, it was decent and the actors looked like they had fun making it. There isn’t anything positive to say about this movie because it’s name is misleading. From the name, I was expecting stoners fighting off zombies trying to survive whilst they were high with some funny (or at least a little entertaining) dialogue or action thrown in. However, all I got was the start giving you a false promise that this movie would be all about gross-out zombies but in the end, you were given over an hour’s worth of non-entertaining dialogue. However, after those scenes, when the action kicks in, the movie becomes entertaining, but it is literally too little and too late. The whole movie is basically five minutes of zombies, an hour of stoners doing nothing but having fun and then twenty minutes of zombies. It would have been so much better if the zombie scenes were there every five to ten minutes but instead, they were clumped together at the very end.

To simply put it: If you like stoner comedies, this movie is for you (but I warn you, it’s no Cheech and Chong or Harold and Kumar) but if you’re a zombie fan, look somewhere else because out of 90 minutes, there’s only twenty minutes of zombies and that’s at the end so it’s just not worth it. The reason why this was hard to review was because of the situation of the movie. Bong of the Dead is a bad film but I also did see the potential for it to actually be a decent horror comedy – a stoned Shaun of the Dead, if you will. Shaun of the Dead is the PERFECT example to use of how a zombie comedy should be. It should have funny dialogue with zombies practically in every scene. However, I know that this had a small budget of $5000 and that the movie was made by one person and his one camera and I respect that and had taken this into account but it costs nothing writing the script and the characters. It’s a cool idea to have but I think this would have been better as a stoner comedy with the zombies out of it. However, the effects were good and when the zombies came into it, the movie woke up a little but as I said, by then it was too late. Overall, it’s not really worth a watch but if you’re really bored one of the nights, try it out.

Bong of the Dead is out now on DVD, released by Left Films. 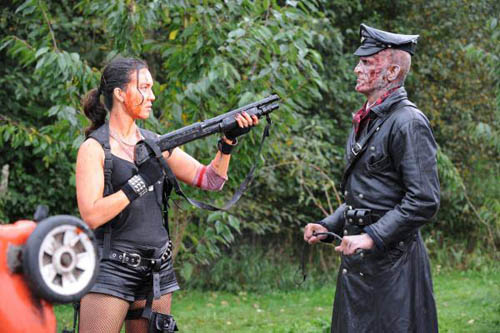