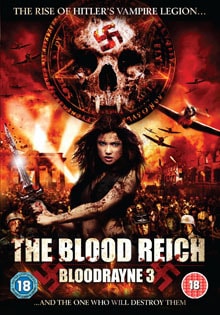 Carrying on the vampire craze is The Blood Reich: Bloodrayne 3, a movie about a female half-human, half-vampire fighter who fights to rid the world of vampires at night. So basically, it’s a female version of Blade. Only this time, she joins the fight against the Nazis in World War II whilst finding the Nazi Leader is actually a vampire who wants to inject Hitler with the vampire venom to make him immortal. This probably sounds like some sort of joke to you right now but I assure you that this is not a joke and is a real movie that is being released on DVD. The Blood Reich: Bloodrayne 3 is one massive joke as far as the story is concerned. There’s no story here at all, just a little bit and there were quite a few plot holes. The movie started off promising and then after five minutes, it got boring too fast. Considering that this is supposed to be some sort of vampire action movie, we got more dialogue and the dialogue was just very bad. There’s no point in even talking about the plot because there wasn’t a trace of a plot anywhere. The characters were very one-dimensional and mostly quite annoying. The heroine, Rayne, had nothing except for her massive attitude of toughness and girl power and seemed like one big mess altogether with no explanation of why she does things or why things happen to her. The villain of the movie is uninteresting and not memorable in the slightest. He was supposed to come across as this terrifying bad-ass vampire but instead comes across as a moody, boring sod! The rest of the characters in the movie were very badly written and felt like they were placed there randomly so the main character could progress with the story. There have been some movies with some terrible acting but The Blood Reich: Bloodrayne 3 takes it to a whole new level in quite a few scenes, the main ones being whenever a character was angry with someone. It didn’t feel authentic and felt forced, which is one of the main problems of the movie. However, it’s evident that the movie favours action and combat more than it does story or performances.

Talking about the writing would almost be pointless considering there was hardly anything good about it. The characters were very poorly written and didn’t really have much thought to them, the story was just daft beyond measure and the script was diabolical; there were parts when one of the characters repeated what they said constantly and that quickly became annoying. Uwe Boll has done it once again as he gives us an action movie that has no drive and felt rushed with random scenes. One random scene being that Boll sees the movie is going nowhere and so introduces a lesbian scene that has no relevance to the story whatsoever. The same goes for another sex scene later on in the movie, it just has no relevance at all. Everything was a mess from start to finish. This movie was supposed to be an action movie and yet it was mostly dialogue, although the action scenes were quite a mess as well as anticlimactic and unimpressive. Overall, The Blood Reich: Bloodrayne 3 is boring, repetitive and wouldn’t be fit to watch even as a joke. Uwe Boll really should change his first name to ‘Terry’, which would sum up what kind of director he is and what his movies are.

The whole movie is pretty much a tragic mess with hardly anything good about it whatsoever. The movie relies too much on the action scenes and trying to make them great but fail very miserably. The Blood Reich: Bloodrayne 3 doesn’t have anything great to boast; rubbish acting, unmemorable action scenes, diabolical script and a horrible story. Pretty much rubbish except for a couple of scenes and even then, it’s forgettable. Avoid!