I wasn’t that bothered about seeing Zombieland when I first heard about it.  I like a bit of horror (as you can see by the past month’s worth of reviews!), but I’m growing tired of zombie films.  There are just too many of them about and few offer anything new to the genre.  But I have to say, after dragging myself along to watch it I actually quite enjoyed it and thought it did offer something fairly new to the shuffling hordes of the undead.

Zombieland takes place in a world already overrun with zombies and we follow Columbus, one of the few survivors, as he makes his way across America in a vain effort to try and find his family.  Along the way he bumps into Tallahassee (Woody Harrelson), a tough, no nonsense guy who revels in taking down zombies left, right and center.  This clashes with Columbus’ strict zombie survival rules, but the pair team up anyway and end up clashing/bonding with Wichita and Little Rock (Stone and Breslin) on their travels. 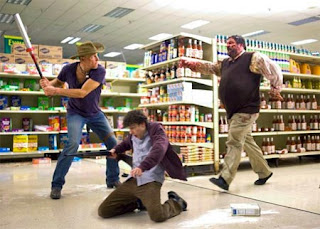 The core narrative is pretty predictable and it’s not a groundbreaking film by any stretch of the imagination, but it’s humour and lightness of touch is refreshing for a zombie film.  Yes, there are plenty of zombie comedies out there, but most of them still have that dark edge or horror trappings, whereas Zombieland never particularly tries to be scary or claustrophobic like most.  It just aims for pure, simple entertainment, focusing on what the film describes as the ‘little things’ that can be fun about the situation, e.g. being able to trash shops, take out zombies in extravagant ways without consequence and being able to get into theme parks for free.

The film has more heart than most zombie films too, although this is where the film gets quite predictable and cliched.  You know from early on what point Buy Clomid Online Pharmacy No Prescription Needed they’re going to be making about friendship, family etc….  It still sort of works though, mainly due to the likeable cast, in particular the two male leads who work very well together.  Jesse Eisenberg proves he can pull off mainstream roles after a number of strong indie performances and handles the film’s narration with ease.  I’ve always been a fan of a Woody Harrelson too and it’s good to see him in a decent lead role after a bit of a lull, his next film Defendor looks like it could be good too. 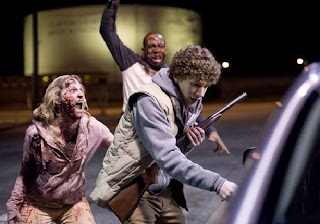 It’s not a big laugh out loud comedy, but more of a consistently funny one.  One exception is a totally unexpected (depending on how much you’ve read into it) and hilariously good extended cameo that appears midway through the film.  I knew nothing about it beforehand and practically did a double take when it came along.  The random silliness of the scene fits in nicely with the irreverent mood of the rest of the film and it’s probably Zombieland’s high point.  The finale set in a theme park is great fun too.

It’s not going to change the world, but Zombieland is a lot of fun and is a welcome addition to the often over-earnest and over-saturated zombie genre.  Perfect beer and junk food fodder with enough heart and humour to entertain non-horror audiences too.