I was a massive fan of Red Dwarf as a youngster when it was first broadcast on TV, but I must admit I lost interest somewhere around Series 7, when the programme started to lose steam.  When Back to Earth was announced, a three part mini-series (displayed on DVD as a feature length film) reuniting the cast and writer/director Doug Naylor after ten years, it passed me by.  For one I don’t watch an awful lot of TV these days, and also I’d pushed the memory of the old episodes way into the back of my mind.  When I was contacted by the generous folk at Warner Bros. Entertainment offering me a copy to review though all the happy memories flooded back and I thought I’d give this new incarnation a chance.

Back to Earth takes place nine years after series 8 (ignore the box’s claim to be set after ‘series x’, that’ll become clear after watching the DVD), Kristine Kochanski is dead and Lister is still saddened by this.  The crew get attacked by a strange dimension jumping squid-like creature and a new hologram comes aboard to whip the crew into shape.  They use the squid’s tentacle to try and open up a gateway to another dimension to send it back through, but end up getting sucked into it themselves instead.  On the other side they find themselves in our world, where of course they aren’t real, but merely characters in a TV show.  Learning that they will die in the final episode of the programme they track down their ‘maker’ to try and amend this. 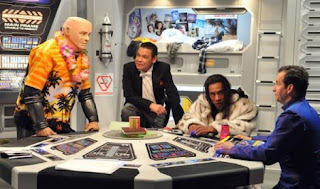 Back to Earth is a disappointing film/set of episodes that is redeemed by it’s DVD.  For one, it’s chock-a-block full with extras which increase the value of course, but also I found that listening to how the new mini-series was made helped explain some of it’s shortcomings.

I must admit it took me a while to get into Back to Earth.  To begin with the humour just wasn’t coming across at all.  One reason for this after watching some of the documentaries on the disc was that this was the first time they’d shot it like a film; out of sync and shot-by-shot, rather than using multiple cameras in front of a studio audience.  You can see the actors struggling to get their gags across without the help of a supportive crowd.  That said, the jokes aren’t particularly witty though, with most gags either over-familiar or just childish.  After a while I did warm back to the characters though and began to enjoy myself a little more. 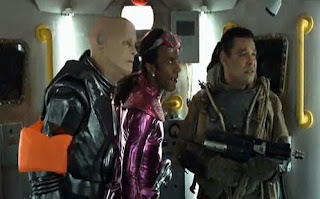 One of my favourite aspects of the original Red Dwarf episodes were the complicated plots, which always had a crazy but logical feel to them, keeping true to it’s sci-fi roots.  Back to Earth manages to get there in the end, with some great ideas being revealed in the climactic scenes, but it takes a while to get there.  The first third of the mini-series set on Red Dwarf just wasn’t that interesting at all, and when they get to Earth it all just seems like a bad idea at first, but it does kick into gear after a while.  In Naylor’s commentary he does make reference to the fact that he wanted the mini-series to be a two-parter and not three as it ended up, so maybe the script was padded out to accommodate this.   The ending does bring the show back to Earth (excuse the pun), not literally but in terms of feeling like the Red Dwarf of old, suggesting that should the programme come back to our screens it might hopefully be more as we remembered rather than the last two series that tried to change the format and failed.

Back to Earth is quite hit and miss in terms of special effects and overall sheen too.  Again, after viewing the extra material on the DVD it’s apparent that the budget was much lower than it should have been, mainly because the programme’s production was funded by Dave this time rather than the BBC.  Of course Red Dwarf was never one for cutting edge effects though, so the cheapness is part of it’s charm I guess.  I find it easier to get sentimental about naff practical effects than naff CGI though. 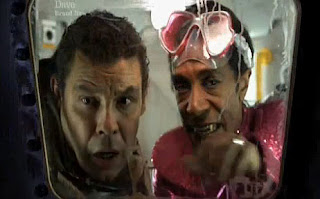 As you can guess by the plot, the mini-series owes a great debt to Blade Runner, and it doesn’t try to hide this.  Several scenes are clear parodies of scenes from Ridley Scott’s masterpiece and many of the shots, costumes and sets are lovingly reconstructed.  The production designers manage to use their meagre budget very effectively in this aspect.  My issue though was that these parodies felt a bit overused, and after a while I wished they’d come up with something new instead of just ripping off something we all know so well.

Overall, it’s a patchy affair that was disappointing, but I did warm to it towards the end and it suggested that given the chance the show has the potential to get back to it’s roots.

I’ve touched on this already, but thought I should do a mini write-up.  I won’t talk about the picture and sound quality because I was given a region 1 copy and my proper DVD set-up doesn’t play those.  I had to watch it on my old player through scart which just ruins the picture on my LCD TV.

Features-wise this DVD is brilliant, as I mentioned it actually improves the viewing experience no end.  Contained in the 2-disc set are two commentaries, a two part documentary, deleted scenes, smeg ups, several featurettes, trailers, web videos and a photo gallery.  The box mentions an Easter Egg too, but I couldn’t find it. 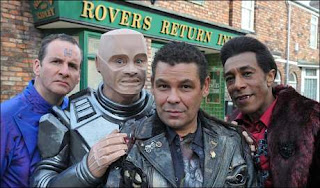 I didn’t sit through the Buy Levaquin Online Pharmacy No Prescription Needed whole of the two commentaries, but I really enjoyed what I heard of them.  The cast commentary seems very enjoyable with the boys on top form, sadly better form than in the mini-series.  Doug Naylor’s commentary is very interesting, going into great detail about the making of the mini-series and how it came to fruition.  Most interesting is the story behind the long-planned Red Dwarf the Movie.

The documentary is great and I found myself enjoying it more than the mini-series.  Almost every aspect of the production process is covered and everyone seems very open and honest about everything, which is refreshing after watching the usual tacky love-ins that make up most making of’s.  It looked like the cast and crew had fun too and seem to get on like before despite the tight schedule and new methods of production.

The rest of the features aren’t as strong but are still entertaining enough and informative, especially the FX featurette that is more enjoyable than most of it’s kind.

So all in all it’s a case of a weak mini-series on a brilliant DVD.  Make of that what you will.