Duck Soup was the final film the Marx Brothers produced for Paramount before moving over to the more restrictive hands of MGM.  For many it’s the pinnacle of their career and I hadn’t got round to watching until now, after already getting through most of their later films, which are fun, but a bit formulaic and over-stretched.  Duck Soup though was produced in the days before MGM reigned in the Marx Brothers’ madness and it was worth the wait.

The story of course is pushed into the background, but concerns the small country of Freedonia, which is in financial crisis and is forced to borrow a huge sum of money from a wealthy widow (Marx Brothers favourite Margaret Dumont).  In exchange for the loan she insists that control of the state is given to the crazy Rufus T Firefly (Groucho), who through various mishaps ends up going to war with neighboring country, Sylvania.

The set-up allows the brothers to hit on plenty of satire in amongst the slapstick, although it’s not as biting as modern offerings.  Nevertheless it’s still hilarious and had me laughing out loud at points even though I was sat at home watching it alone.  The gags come thick and fast with Groucho’s one-liners firing out like a machine gun, and some of the physical humour is spot on too.  The famous mirror scene in particular is immaculately performed. 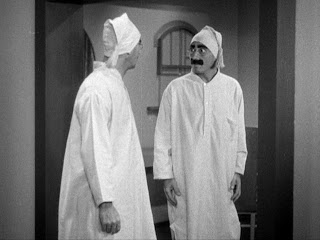 As mentioned previously this was also the last film the brothers had maximum control over which means that Duck Soup Buy Prednisone Online Pharmacy No Prescription Needed is without any tacked on love story, without the usual piano and harp solos, and is totally bonkers.  The final war scenes are utter chaos and Groucho’s constant costume changes during the battle had me in stitches.

There are still some flat and dated moments when the film tries to maintain it’s ‘story’, but these are few and far between and whenever the Marx Brothers are on screen it is pure gold.