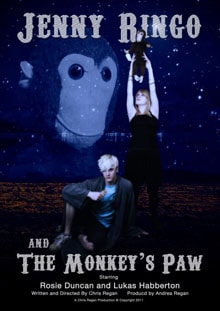 Our latest Short Film Showcase looks at Jenny Ringo and the Monkey’s Paw, which was written and directed by Chris Regan, produced by Andrea Regan and stars Rosie Duncan and Lukas Habberton. I’ve already reviewed the short as part of one of my movie marathons, but now the film is available for all to see, so I thought I’d share it with you all.

To tell us more is Chris himself:

Jenny Ringo and the Monkey’s Paw is a short horror/comedy that features magic, monsters, monkeys and a musical number. It’s a film about a witch who comes home one day to find that her slacker buddy Gavin has found a monkey’s paw which grants him three wishes. Unfortunately he made some really bad wishes and now Jenny has to figure out how to reverse them before things get any worse.

Jenny first appeared as a character in a short story I wrote at college. I continued to write her into stories and scripts throughout university and she changed a little with every new incarnation. She started off like a female John Constantine (I was reading a lot of Hellblazer back then) but now she’s more like a grown-up version of The Worst Witch. The stories are mostly about how she wants to be really good at magic but real life keeps getting in the way, usually in the form of her inept flatmate Gavin.

The inspiration to make the film really came from watching other short films. I used to attend a monthly short film night in Brighton called MovieBar (which I now run, www.moviebar.co.uk) and I’d see all these fantastic short films competing for the attention of a mostly drunk pub audience. I started to think about things that would really shock the audience into paying attention, mostly by featuring elements that you don’t usually see in short films such as monsters and musical numbers. That’s also the reason for the art-film opening – I wanted people to think they were about to watch something slow and depressing, so that when Jenny turns up it’s such a huge relief the audience is automatically on her side.

Earlier this year I decided to develop the film into a kind of web series and I shot a second film, Jenny Ringo and the Cabaret from Hell, in February. I’m hoping to have that one finished by the end of the year and you can keep up to date with my progress by signing up to the mailing list at www.jennyringo.com