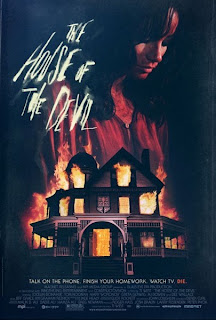 The House of the Devil is an affectionately accurate homage to horror films from the late 70’s and early 80’s, and one that works very effectively.

The film has a simple story; a college student who is hard up for cash takes on a babysitting job on the night of a lunar eclipse. When she realises that the couple who hire her don’t actually have a child, things start to get a little distressing.

The film mimics the style of films from the period mentioned above perfectly. It’s not just a flashy gimmick used now and again as a nod and a wink, it actually does feel like you’re watching an old forgotten horror film. It also shares the same slow-burning creepy quality of the better films of that era rather than just subjecting the audience to cheap jumps and unnecessary gore. Although very little happens in the first two thirds of the film, the feeling of tension is so effective you can’t help but be glued to your seat to find out what will happen in the end.

Unfortunately, I found that when the climax did arrive I felt a bit let down. It’s not a bad ending by any stretch, but after such a subtle and engrossing build I felt a little cheated by a more shlocky and predictable ending.

I would still recommend it though, so long as you can appreciate the slow pace and minimal plot. It’s a film that’s clearly been made with a lot of love and affection for the genre, and a lot of effort has been made to create a film that references the past without sinking into parody.