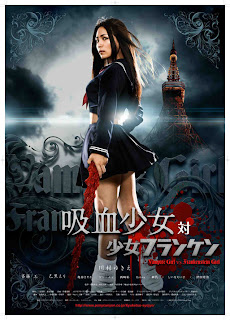 Plot? Er ok, when a new girl (Yukie Kawamura) comes into school and falls for the class hunk, popular girl Keiko (Eri Otoguru) isn’t happy and the two become worst enemies. So far so textbook yeah? Did I mention the new girl is a vampire, and somewhere along the way Keiko is murdered and her father reanimates her corpse using various bodyparts to turn her into ‘Frankenstein Girl’? Oh and it’s set in a high school where students are mainly segregated into groups such as the Wrist Cutting Club and the Ganguro Girls, girls who idolise African Americans and try to dress, talk and look like them – all the way down to colouring their skin.

If you haven’t guessed already (the title is a giveaway), Vampire Girl Vs Frankenstein Girl is as mad as a bag of squirrels. Most of what occurs in the film is utterly ludicrous and that, added to an insane amount of gore and bloodletting are what sells this film. Basically, take the maddest Japanese film you’ve ever seen, add in the goriest horror film you’ve ever seen, multiply it by ten and then you have Vampire Girl Vs Frankenstein Girl. It’s got everything from a character using her own severed limbs to turn herself into a helicopter, song-and-dance numbers utilising a ribcage as a guitar, to a wrist slitting competition where one girl ends up slashing through her entire arm. It’s all done with it’s tongue firmly in it’s cheek of course and with a makeshift low budget style that means the effects don’t look particularly realistic. This works to it’s advantage though, as if they did I think it would be much harder to stomach.

It’s clearly not for everyone of course – if any of the scenes described above don’t appeal to you then you won’t like the film. It’s crude, offensive, utterly crazy and there’s enough blood in the film to fill the Great Lakes; it’s not an art piece and it’s not safe family entertainment put it that way. Personally I really enjoyed it, it’s a hell of a lot of fun and it’s insanity knows no bounds, which to me is a bonus. However, being a big fan of Machine Girl which has a similar style and appeal, I don’t think this is quite as successful. Quite a few scenes are stretched out a little too far and could have been trimmed. Also, I found the Ganguro Girl’s a little too offensive at times and not in the right way. I understand it’s poking fun at teenage stereotypes, but it just came across as being a bit racist to me.

Fans of ultra-gory Japanese madness like Machine Girl and Tokyo Gore Police will lap this up, and if you like your films to be truly extreme without getting serious in any way then this should not be missed.