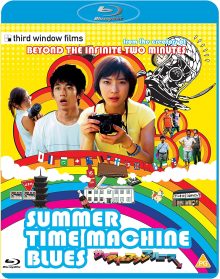 The Kyoto-based Europe Kikaku theatre group was originally formed by a group of university students. They largely focussed on making comedy plays, usually with a science fiction slant. Whilst one of the founding members, Makoto Ueda, was still at university, he wrote the script for Summer Time Machine Blues, which the group eventually produced for the stage.

The play was a big success for Europe Kikaku and it caught the eye of director Katsuyuki Motohiro, who approached the group with the idea of making it into a film. He was an established name, who had been directing fairly mainstream TV shows and films since the 90s, but saw this as a fun, more personal indie project he could set his heart to. Ueda agreed to let Motohiro direct his script and the film version of Summer Time Machine Blues was born.

The film has taken a while to land on British shores, being made back in 2005. With Third Window finding success with Beyond the Infinite Two Minutes, which was also written by Ueda and produced by Europe Kikaku, as well as the similarly low-budget and high concept One Cut of the Dead, the label have gone back a decade or so themselves to release Summer Time Machine Blues on Blu-ray. Having loved both of the previously mentioned titles, I eagerly got hold of a copy and my thoughts follow. 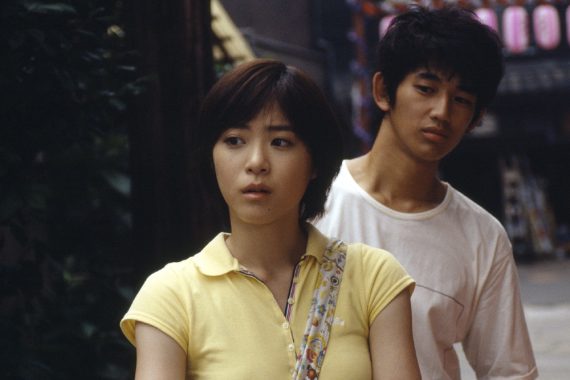 Summer Time Machine Blues opens with the five members of a university sci-fi club passing the time during a particularly hot summer. Their lazy days hit a stumbling block, however, when coke is accidentally spilt on the remote control for their air conditioning unit.

Help comes to hand in the most bizarre fashion though, as the next morning a mysterious visitor (Riki Honda) leaves a strange device in their sci-fi club room. It turns out to be a time machine and the boys decide to use it to go back to yesterday and prevent their precious remote control from getting broken.

However, after speaking to Professor Kohtaro Hozumi (Kuranosuke Sasaki), who’s an expert in time travel, they learn that messing with the past could have devastating effects on the present. With part of the group already back in time making a mess of events yesterday, the rest desperately try to put things back on track. 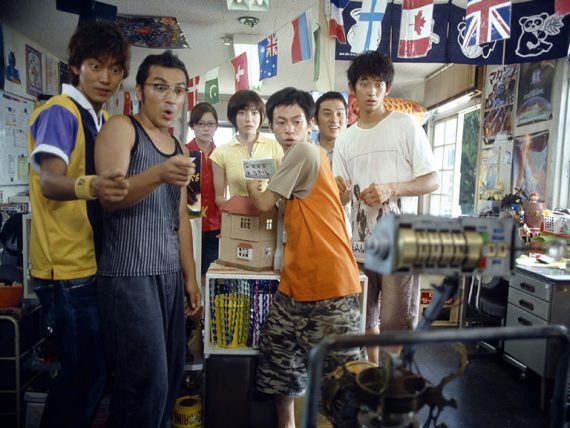 It’s difficult not to compare Summer Time Machine Blues with Beyond the Infinite Two Minutes, due to their shared writer, Europe Kikaku links and time travel comedy focus. However, in doing this, Summer Time Machine Blues comes out favourably. Not only was it made around 15 years earlier, it’s actually a slicker film in a number of ways. This is largely down to having a much more experienced director (Beyond the Infinite Two Minutes was Junta Yamaguchi’s debut) and higher budget, though it’s still very much a small-scale indie production.

This small scale is all part of the charm. I love a good time travel film in general, but particularly like ones like this, which prove effective sci-fi storytelling can be done with relatively few special effects, minimal locations and an intimate focus rather than a grand canvas.

Here, though the implications of time travel, we are told, could be catastrophic, our protagonists are merely using a time machine to fix an air conditioner and to goof around.

Though fairly simple in comparison to a lot of time travel movies, Summer Time Machine Blues tells a wonderfully clever and finely tuned story. Ueda came from a video game programming background, which he believes gives his work a precisely constructed nature. You could pick flaws in most time travel movies, but I believe it’s difficult to here. Some aspects are a little over-explained perhaps, patronising the audience in places, but this exposition is generally told with enough humour to avoid dragging the film down. 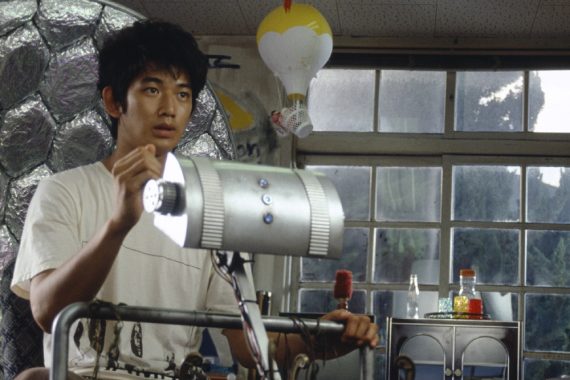 Indeed, the film has quite a pace, though it’s a little on the long side for an indie comedy, largely due to an over-extended finale/coda. The editing and visual style are energetic throughout, with a playfully stylish, albeit lo-fi aesthetic. The first half can feel a bit erratic, with some scenes cut short before they’ve fully played out, but this all makes sense as the film moves on. This, on top of other strange details coming into play further down the line, reminded me very much of One Cut of the Dead. Of course, Summer Time Machine Blues was made a fair while before that, so, once again, it seems that Motohiro’s film was, excuse the pun, ahead of its time.

It’s also quite unique to have a time travel movie based around an ensemble cast. Most time travel movies tend to be about a single protagonist dealing with the concept, or at least only a pair of people. Here we’ve got the five boys, two girls from the photography club who operate out of the sci-fi club’s store cupboard, and future traveller Akira Tamura, all trying to keep their present timeline from crumbling in on itself.

The performances are very broad and in-your-face, which won’t appeal to all tastes, but if you’re well versed in this style of Japanese comedy you’ll easily settle in the groove.

Overall then, it’s another hugely enjoyable and cleverly constructed lo-fi sci-fi romp put in the spotlight by Third Window. 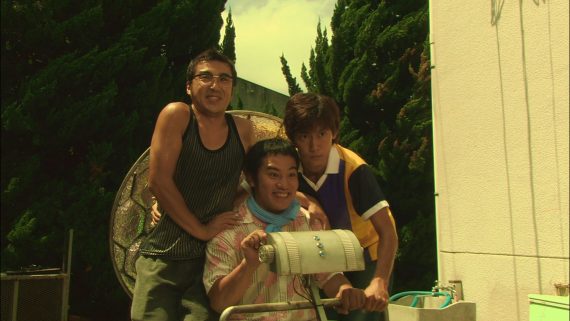 Summer Time Machine Blues is out on 4th July on region B Blu-ray in the UK, released by Third Window Films. I watched the Blu-ray version and it has a clear and sharp image. The colours are a little odd at times, but I think this might be intentional to sell the idea of the blisteringly hot summer. Audio is crisp and clear too.

The interview with writer/creator Makoto Ueda is a valuable addition, giving background on the film’s origins and how it was transferred from stage to screen.

I also liked the two short films a lot. They’re both deceptively simple premises surrounding time travel that are cleverly shot in long single takes with effects that seem basic but boggle the mind when you try to figure out how they were done.

I enjoyed being able to see some clips from the original stage play version of the film too. It seems ostensibly the same in terms of plot, but details are changed to better fit the fixed setting. It helps you appreciate what the makers of the film have done to ensure it’s a cinematic experience rather than just a filmed stage play.

So, a solid package for an enjoyable indie gem. It comes highly recommended.