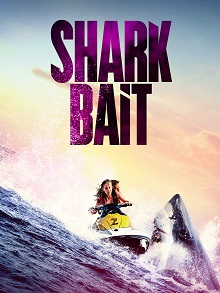 Five friends on their last spring break vacation in Mexico stay up all night drinking and partying, and foolishly decide the next morning to steal a couple of jetskis and take them for a joyswim. The foolishness piles up when a risky game of jetski chicken leaves them stranded and injured, and with a vindictive shark out for their literal blood.

It’s no secret that I love shark movies. Hell, I host a podcast at least partially dedicated to them (Deep Blue Sea: The Podcast, available everywhere podcasts are found). So when our illustrious leader David received an email request for someone to cover this film, I couldn’t possibly say no. I’ve watched a fair few fin-focussed films in recent years, and in doing so I’ve established several categories of aquatic monster movies. You’ve got your classic adventure, people-on-a-mission films where there’s a creature, generally a shark, attacking an area, and a small team of people head off to see to it (see: Jaws, Orca, Lake Placid), which tend to mix the adventure and thrills with a decent amount of character development and humour. Next up are the campier films that focus more on entertainment than realism, often plunging an unlikely rag-tag team in the middle of a situation they must escape from, but with a number of gory and creative kills along the way (Deep Blue Sea, Piranha 3D, Anaconda). There’s the ultra-low budget, usually made-for-TV dime-a-dozen films where the sharks could be easily confused with a grey smudge or an ill-tempered sea bass with a fin strapped to it (Ice Sharks, Ghost Shark, Santa Jaws, literally a thousand other films), which are often very entertaining, but made for £20 and a Tesco meal deal. And finally you have the sincere, realistic films where everything is very believable and tends to make a great deal of sense. The effects are generally tasteful and well used, the body counts relatively low, and they can be amongst the best shark movies out there (The Shallows, 47 Meters Down), but sometimes they are based on true stories (The Reef, Open Water), which can have a negative affect on the audience’s enjoyment, as real life tends to be less entertaining than the kind of shark-centric shenanigans a good screenwriter can come up with, and sometimes they aren’t based on true stories, but the film is so lacklustre that it feels like it could be (Great White). Unfortunately, Shark Bait falls very much into that last category. 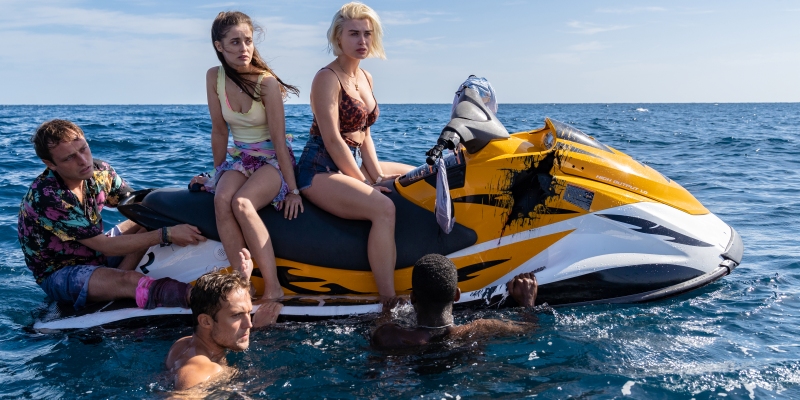 It’s a well made, gorgeous film, but the only thing thinner that the plot is the character development. The actors are all decent-to-great (Holly Earl is a particular stand-out), but they have so little to work with, and what clunky dialogue and vague personality traits they have make most of them detestable arseholes whose bloody demises can’t come quickly enough, even if they often are off-screen. The entire set-up is entirely their fault and removes any trace of sympathy you may feel for them, and if that’s not bad enough, once they’re fully in their deadly predicament, a bunch of nonsense melodrama is thrown in that adds nothing to the relationships or story and only strives to pad out the time. Given the script was written by Nick Saltrese, who has previously written for Emmerdale, Brookside, Hollyoaks and Eastenders, this isn’t much of a surprise. It’s the kind of film where you yell at the characters for not taking the more obvious way out of their dilemma (just get in the water, hold onto the jetski and kick your legs, propel it like a float!) but also you’re a little pleased they don’t listen to your advice, because this way you get to watch them perish all the sooner. 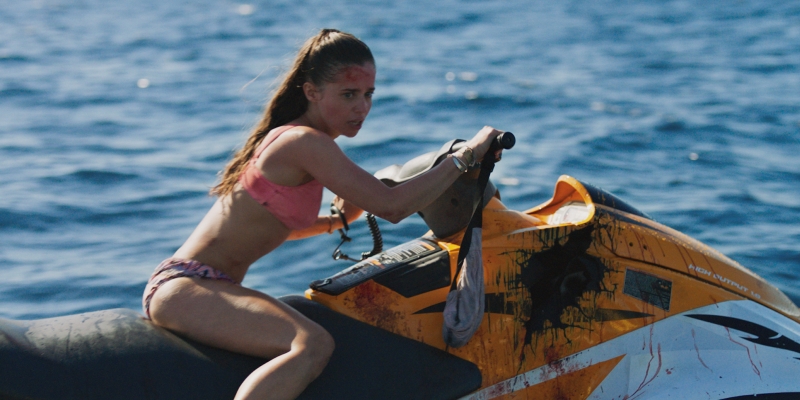 It’s possible I’m grading this a little harshly and in comparison with the numerous, far superior shark movies out there, and if you’re a fan of all things great, white, and toothy, then you’ll probably find something to appreciate here. Some death elements are inventive – a character gets dragged away whilst another’s hair is caught in their clothing, for instance – and the shark in question has a vindictive, vengeful turn that’s always fun in these kinds of situations, whereby they play with their prey, very much for our amusement. There is some decent, gruesome injury detail and excellent sound design to accompany it, the story doesn’t hang around in getting the characters to the meat of it all, and for a film largely set on a jetski in the middle of open water, the visuals are varied enough to maintain your interest. It’s just a shame that such a beautiful film is tied to a generic, bland story, meaning that at the end of the day, Shark Bait fails to stay afloat.

Shark Bait is available now on DVD or streaming on Altitude.Film and other digital platforms.