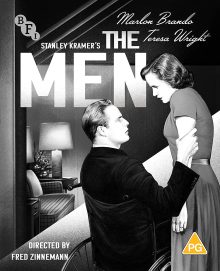 Marlon Brando’s first big-screen appearance is something to behold, as expected from the acting giant, but the 1950 drama, The Men, is far more than just a vehicle for a budding star, it is one of the best films of the 50s and a true exploration into a far more nuanced and intimately told drama than what American moviegoers were accustomed to at the time, and what comes from this new BFI release is a true gift and testament in representing a piece of work that’s just as relevant and socially sharp as it was over seventy years ago. The Men tells the story of Ken, played to absolute raw perfection by Brando, a young soldier who is severely wounded in battle, resulting in an injury that would render him a paraplegic, hospitalized in a facility that specializes in fallen troops that suffer from the same fate. This new lifestyle becomes the crux of the film, and the examination of those who are forced to change how they live, and the weight of a judgmental society who stigmatized those that are different, naturally or otherwise.

Marlon Brando really is the pulse of the film and his groundbreaking performance, while occasionally teetering into the feel of traditional performances of the era, blossoms in a way that hadn’t really been seen at the time, at least in American cinema. He handles each scene with such honesty, such sadness, and an eventual determination that really lights up the screen as he begins to accept the new version of himself. That’s one of the things that The Men does wonderfully. You see the sadness, the brokenness of those facing the unknown. It never allows the “disabled” to become something you feel sorry for, but rather the film treats its characters as true individuals, fully realized and brilliantly written. It rivals the likes of 12 Angry Men in terms of the scope of characters and their breadth of believability. There isn’t a side character that’s thrown to the wayside or used as plot fodder at any point. I was worried going in that Teresa Wright would be a cookie cutter female moral support character that plagues so many productions from back then, but it becomes evident quite quickly that not only does she give just as layered of a performance as Brando, but she is just as well written and put into the scenario with the same level of importance and honesty as her male co-star. This is all thanks to director Fred Zinneman’s relentless desire to break free of the theatric tropes that he felt American film was ready to move past. Truly the birth of something special began with The Men. 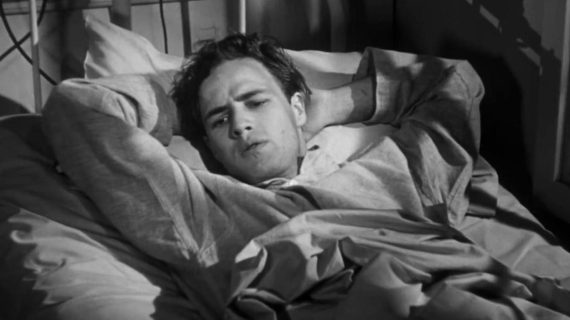 The social and psychological elements of the film are just as impressive as the acting and technical sides. As I mentioned, the characters feel so real and their scenarios vary in scale and outcome, never shaming away from the harsh realities that come with these injuries, both physically and mentally. Also, the film shows the realities of society, both beautiful and ugly. Without delving too deeply into the specifics, there is a scene where Ken and one of his friends go out for a meal and a drink, and the way the scene unfolds is riveting and true to life. We watch the weight of the eyes of others be felt deep in their souls, and it shakes you to your very core.

The Men is an underrated film from Brando’s prolific career and this new BFI Blu should be an absolute treat for fans of Brando and 50s American cinema alike. It truly stands out from the pack. This new Blu-ray features a beautiful transfer that is very light on wear instances of specks and debris are few and far between. The audio is complementary to the natural feel of the film, and the dialogue-driven piece doesn’t get much in the way of action, but some more intense moments boom nicely. Finally, the true treat of this release are the extras. We get multiple short documentaries from the time that dive into the same sort of social exploration that this film does, but in an even more natural manner. At times the narration on these pieces feels a tad dated, but the importance and interest presented are far worth the dated elements.

All in all The Men is a cinematic treasure just waiting to find a bigger audience. I know it’s known in smaller circles, but it remains a lesser explored work in the legend’s body of works. Absolutely see it! 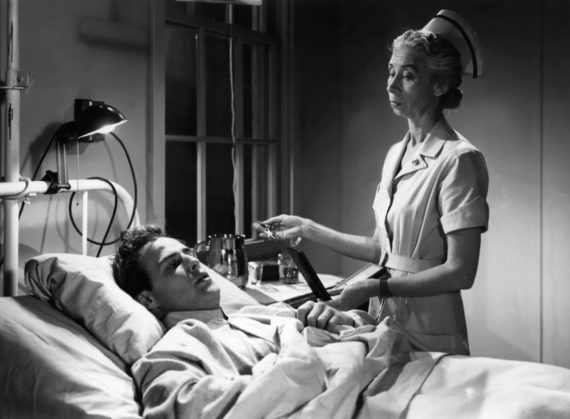 – Presented in High Definition and Standard Definition
– Newly recorded audio commentary by filmmaker and film historian Jim Hemphill
– Return to Action (1947, 19 mins): bricklayers, lawyers, teachers – disabled men and women are encouraged to retrain for new jobs in this short film produced on behalf of the Ministry of Labour
– The Undefeated (1950, 35 mins): released in the same month as The Men, Paul Dickson’s film charts the progress of a disabled ex-glider pilot through the rehabilitation schemes organised by the Ministry of Pensions
– Interview with Carl Foreman (1969, 82 mins, audio only): an in-depth interview with the award-winning screenwriter recorded at the National Film Theatre
– Original trailer
– Stills gallery
– Reversible sleeve featuring original artwork and a newly commissioned design by Jennifer Dionisio
– **FIRST PRESSING ONLY** Illustrated booklet with new writing by Philip Kemp, Scott Harrison and Victoria Millington, a contemporary review, and writing on the extras by Tony Dykes and Katy McGahan
– Includes newly created English subtitles for the deaf and partial hearing on the feature, and the short films Return to Action and The Undefeated