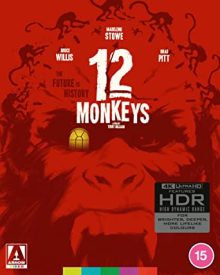 It’s time for another one of Arrow’s lovely UHD reissues of one of their classic films; this month see’s Terry Gilliam’s cult classic sci-fi film Twelve Monkeys take centre stage. David previously reviewed the Blu-Ray release of this surreal and very Terry Gilliam movie back in 2018 and you can read his full thoughts here – https://blueprintreview.co.uk/2018/10/twelve-monkeys/.

There’s not much more I can add here – the film is still chaotic and at times (particularly given that this reissue comes out at the tail end of a global pandemic) unsettling, often feeling like a nihilistic take on The Terminator with a pair of gonzo central performances from Bruce Willis and Brad Pitt. It still has a touch of the absurd comedy that Gilliam cut his teeth on with The Python’s and while it’s easily one of the director’s more well known films alongside The Fisher King and Time Bandits, it frequently feels almost aggressively anti-mainstream.

As with most of Arrow’s UHD reissues, this retains all of the bonus features from the Blu-Ray release with nothing new added, so for anyone wanting to double dip this is going to come down to the quality of the transfer. Thankfully it’s another superb effort, with a brilliantly crisp image full of bold colours that bring out the best in the films stunning sets and locations, as well as clear audio that will make the most of any sound system. If you’re a fan with a 4K set up, this is well worth your time.