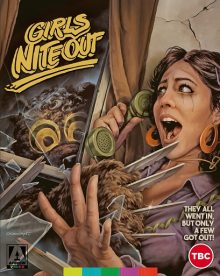 After partying hard (80s teen and horror movies really captured the fun of partying!), the guys and girls of DeWitt University are getting ready for their annual all-night scavenger hunt but ultimately find they have become the prey when a killer, donning the Uni’s mascot costume, starts picking them off one by one. As the kills mount and the bed hopping relationships of the good-looking cast become ever more complicated, it’s up to grizzled campus security guard Hal Halbrook to try and figure out what is going on and stop the killer.

Part party flick, part nasty killer flick, Girls Nite Out is buoyed by an authentic college/being young/party aesthetic as well as delivering some shock kills and one twisted finale. The film may not always be in a hurry to get to the killer/gore aspects as there is as much time spent on the partying and bedding antics of the cast as there is the kills, and this may make those eager for slasher kills impatient. However, it all adds to the fun of the flick as the cast are uniformly good and convincing as young students who are falling in and out of bed with one another and, as mentioned, the party scenes are connivingly staged, meaning it’s just as fun to watch them frolic about as it is hunted and killed. Sure, the thread of the basketball star (James Carroll) bedding several women gets a little tedious and melodramatic, but the makers pull it back for an awesome finale.

The bear costume and knife hand (2 years before Freddy took up his razor glove!) give the killer an equally absurd and terrifying look and when the kills erupt there are particularly vicious, not least with the killer spitting out nasty misogynistic verbal abuse as they slay their victims. That aspect hasn’t aged too well but if you can forgive the time period’s less than subtle approach to proceedings, Girls Nite Out is still a solid slasher and an interesting time capsule of bygone horror cinema.

The cast are also great, obviously sharing great chemistry (which the special features confirm!) and really convince as a group that study, party, love and die together. The makers, rather than parodying or over amplifying the more ridiculous aesthetics of the 80s, appear to capture genuine 80’s youth exuberance giving the film a little more magic than its budget may have allotted for. Seasoned vet and screen legend Hal Holbrook shows up now and again as the grizzly security guard to add a bit of grit to events (apparently having taken the role so his son could appear in the film as one of the college kids!). Seemingly his scenes were shot separately, and it shows, but it’s fun to see Hal taking it all very seriously and acting everyone else off screen.

Genre fans and lovers of all things 80s should seek out Girls Nite Out if they haven’t already as while it contains certain elements we’ve seen hundreds of times before there is enough spin on the genre trappings (and some creative cribbing of well-worn horror tropes) to make it stand out from being just another slasher cash in.

Arrow will release Girls Nite Out on Limited Edition Blu-ray (and Exclusive “The Scaremaker” O-Card) 16 May 2022.