I’m sure this is a familiar story for many horror fans. You have a friend who tells you they like horror movies, so you invite them round for a film night, get in some snacks and, when they’re all settled down on your sofa, you bang on your copy of Cannibal Holocaust and watch in shock as they reel from the extreme imagery only to discover they’ve only ever seen the likes of Insidious and Paranormal Activity.

Yes, horror has possibly more subgenres than any other film genre, running the gamut from literally one extreme to the other, and what tickles one gorehound’s fancy will likely revolt those fans who are happier with spookier offerings – and when new titles drop onto everyone’s favourite horror streaming network, Shudder, you never know quite what you’re going to get. Enter their recent offering, writer/director Rob Jabbaz’s absolutely insane Taiwanese movie, The Sadness. Pitching itself as a very postmodern zombie movie, The Sadness starts off in straightforward territory with a flu-like virus sweeping Taiwan. Rumours of possible mutations are beginning to creep into the news, no thanks to the governments seeming attempts to cover up the severity of the endemic, ensuring that most people are going about their business as normal – so far so “covidsploitation”. The plot focuses on a young couple, Jim and Kat. Kat is heading back into the office after a period of isolation while Jim is trying to get back on his feet and find a job. As Kat is travelling to work on the train, Jim goes to order a morning coffee – and all hell breaks loose.

It turns out that the virus’s mutation is very real, spreading rapidly from person to person and causing their brain to effectively short circuit, pushing them to commit atrocities that no normal human would even consider. As the world begins to fall apart around them, Jim and Kat rush to reunite before the virus takes them too.

It’s easy to understate just how crazy a movie The Sadness is. While it gets off to a slow burn start, director Jabbaz very quickly turns the tone up to 11 and manages to find even more places to go from there that will likely leave a casual viewer repulsed and horrified. Graphic injuries and horrific violence are displayed with gleeful abandon, depraved acts are depicted in almost censor baiting detail and the whole film is wrapped up in a gloriously bleak bow that’ll either leave you wanting to watch something wholesome and happy, or glad that there are still directors wanting to push the envelope of mainstream extreme filmmaking. 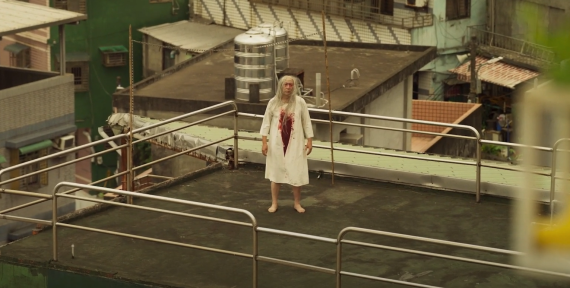 All of this is, of course, helped by the films superb makeup effects, with horrendously realistic looking injuries and moments that are likely to leave even the most hardened gorehound wincing; there are some truly dark acts on display here. While there’s a clear desire for a satirical edge ala Romero, it’s about as subtle as a well aimed hammer to the face and is very quickly swallowed up in a plot that has echoes of Danny Boyle’s 28 Days Later alongside James Herbert’s remarkably pulpy novel The Fog. While it does lose some steam in its final third, it still finds time to shock and disgust and, like that famous offensive joke The Aristocrats, the ending almost feels like a punchline, a nod and a wink to the horrors you’ve just had forced into your eyeballs.

It’s remarkable to see a film so polished yet so unpleasant, a real throwback to the Category III horror movies that were coming out of Hong Kong in the 80’s and 90’s; make no mistake, this is a dark and nasty film that will 100% get under your skin and is absolutely not for the faint hearted with its depictions of body horror, mutilation and sexual violence. But for viewers who dip into The Sadness, they’ll come away having seen easily one of the best extreme horror movies of the last couple of years; maybe don’t stick it on when your friends come round though!