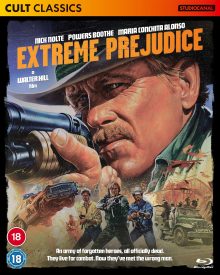 Extreme Prejudice is a film that endured a long gestation period, taking 11 years after being announced to finally make it to the screen. Back in 1976, John Milius was originally going to direct his own script but decided to make his passion project, Big Wednesday, instead. Then Walter Hill was brought on in 1982 but moved on to direct 48 Hours instead. In 1983, Carolco picked up the rights to the script and approached Ted Kotcheff, who had given them great success with Rambo, to direct the film. He didn’t take it on though and at one point Jonathan Demme was surprisingly linked to the project until, finally, it came back to Hill.

When Extreme Prejudice eventually hit cinema screens in 1987, it received fairly good reviews and made reasonable box office returns but, in my eyes, never quite became the popular cult favourite some of Hill’s films did, like The Warriors. Obviously disagreeing with this assessment though, Studiocanal are releasing Extreme Prejudice on Blu-ray, DVD and digital as part of their new Cult Classics range.

I’m a big Walter Hill fan but haven’t got around to watching this title yet, so jumped at the chance of reviewing Studiocanal’s new release. My thoughts on the film and disc follow. Extreme Prejudice sees Nick Nolte play Jack Benteen, a Texas Ranger who’s troubled by the fact his old friend Cash Bailey (Powers Boothe) is now a drug trafficker and his illegal activities are starting to spill over into the small town he polices. Not helping Jack’s grievances is the fact his girlfriend Sarita Cisneros (Maria Conchita Alonso) used to be with Jack and his reappearance has sparked an interest in her.

Meanwhile, we follow the mysterious preparations of a ‘zombie unit’ of elite soldiers who, on paper, have been killed in action. Led by Major Paul Hackett (Michael Ironside), they’re setting to rob a bank in Jack’s territory and we eventually learn how all of this is connected, though I won’t spoil it here.

Like a lot of Hill’s films, Extreme Prejudice is, ostensibly, a western. It may be set in the present and feature drug runners and high-tech covert operatives instead of native Americans and cattle rustlers, but with its dusty small town desert setting and macho tale of honour and loyalty, it’s an old fashioned oater at heart. It pays particular homage to the work of Sam Peckinpah, most notably The Wild Bunch in its nihilistic ending. Hill worked as 2nd AD on Peckinpah’s The Getaway so his referencing of the director’s work feels more like a heartfelt tribute than a rip-off.

With its western stylings, Extreme Prejudice was an easy sell for me and I loved every minute of it. Hill is a master at crafting these tough, no-nonsense action movies and he’s at his stripped back best here.

This wasn’t the case to begin with though, as Milius’ original script was incredibly long, so a lot had to be lost. Hill and screenwriters Deric Washburn and Harry Kleiner did a grand job of trimming out the flab and crafting a lean, mean film. Some more was cut after shooting though, including a whole extra thread to the story that featured Ironside’s partner, played by Andy Robinson. Reportedly about 45 minutes worth of material was culled, so Hill was forever cutting things back to the bare essentials. There’s definitely more than a flavour of Milius in the end result though. On top of a right-wing slant, there’s plenty of the wonderfully hard-boiled dialogue the writer is famous for. Some of this could also be from Kleiner though, a veteran screenwriter who cut his teeth on film noir titles back in the forties.

Bringing this fantastic script alive is an incredible cast of some of the best character actors in the business. On top of the previously mentioned Nolte, Ironside, Boothe and Alonso, you’ve got Rip Torn, Clancy Brown, William Forsythe and Larry B. Scott. Fans of American cinema from the 70s to the 90s will be in heaven spotting all the familiar faces and everyone brings their A-game. Ironside is particularly good, as his character has to do a lot of covert operating, putting on new personas to get things from other characters.

Also delivering the goods is Jerry Goldsmith, who composed the score to Extreme Prejudice. He expertly blends orchestral music with synths, mirroring the clash between the old fashioned Nolte and the high tech zombie unit. The score perhaps lacks the memorable themes of some of Goldmsith’s better-known scores, but in terms of complementing the action, it’s a first-class example of his genius.

And the action is brilliantly staged too, with shoot-outs that boast high body counts without resorting to disorientingly frenzied editing or camerawork. Hill always maps everything out clearly whilst never losing intensity or excitement.

The film also looks great, stylishly shot by Matthew F. Leonetti without losing the gritty nature of the arid locations.

So, once again, Hill crafts a taut, gripping action movie with more than a touch of western in its DNA. With plenty of well-staged, nicely shot, bloody set-pieces and a cast to die for, Extreme Prejudice stands up there with Hill’s best. 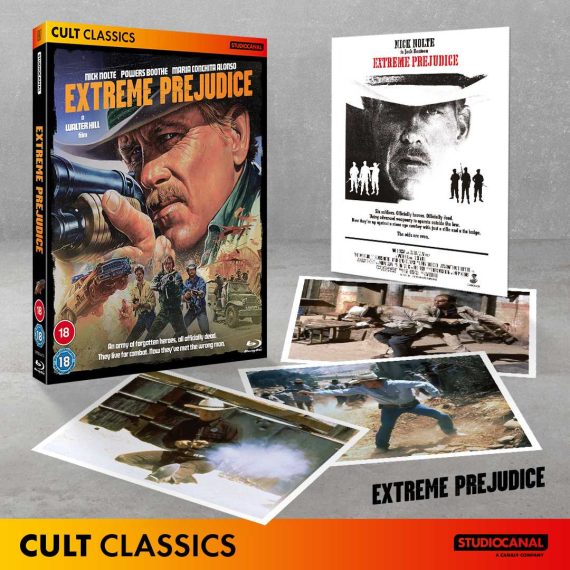 Extreme Prejudice is out on Blu-ray, DVD and Digital from 6th June, released by Studiocanal as part of their new Cult Classics range. I watched the Blu-ray version and it looks fantastic. Details are sharp, colours pleasing and there’s a nice light, natural grain. You get two audio options, 2.0 and 5.1. I watched with the former and thought it sounded great.

C. Courtney Joyner and Henry Parke have a lot of information to impart in their commentary. They’re clearly fond of the film too and spend a lot of time describing its qualities as it moves along.

John Takis’ commentary is a dream come true for Jerry Goldsmith fans as the music historian goes into great detail about how the score complements the film. It really makes you appreciate how much thought the great composer put into his work. Also, in between his explanations, Taksi plays numerous music cues, many of which were not used in the final film, so you get a host of treats to listen to.

In essence, the Clancy Brown interview simply has him talking about how it was to work with everyone, but he’s a pleasure to listen to and has plenty of fun anecdotes to tell.

Michael Ironside talks a bit more generally about the experience. Again, it’s wonderful to hear his recollections of the shoot and he has lots of stories to tell.

In his interview, DOP Matthew F. Leonetti loosely describes his working methods and how it was to shoot Extreme Prejudice.

The vintage EPK is, as you’d expect, a promotional fluff-piece but it is nice to see some behind the scenes footage and a few interviews from the time.