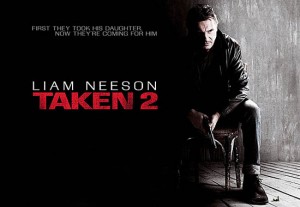 On Monday February 4th a day-long Taken 2 Phone Challenge took place on the streets of Soho. A multi-platform, interactive and immersive treasure hunt, bringing the dramatic themes of Taken 2’s Istanbul story onto the streets of London.

The challenge was designed to celebrate the release of Taken 2 on Blu-ray and DVD release from Twentieth Century Fox Home Entertainment.

It began with 50 mysterious mobile phones being posted to journalists. The phones arrived in unmarked envelopes, with just a Twitter handle and hashtag pointing towards the challenge to come. Messages from a special Bryan Mills email address laid out the terms and conditions of the task, along with targeted Tweets and texts to heighten the tension.

A set of phone calls gave contestants a series of increasingly cryptic challenges, launching a London- wide treasure hunt, all inspired by the drama of Taken 2, including:

– Meeting a Turkish man smoking on a bench in Soho Square and following his map
– Cracking a code at an Istanbul-themed restaurant
– Demonstrating a “particular set of skills” at a secret market stall
– Navigating to an end point at a Taken 2 safe house.

The winner of the challenge earned themselves a Five Star weekend break in Istanbul.

Below is a video produced about the day: