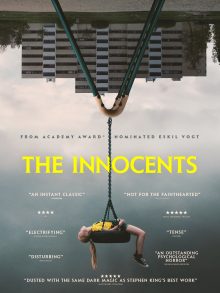 Is there a better way to describe a film by simply stating that there isn’t anything else quite like it? The Innocents, directed by Eskil Vogt (writer of The Worst Person in The World & Thelma), is a genuinely original and expertly crafted horror destined to become a genre-favourite in years to come. The film focuses on multiple children within an idyllic housing estate who, when left to their own devices, begin to dangerously experiment more and more with some newfound mysterious powers. Discussing his creation in a recent Q&A (presented by Signature Entertainment), Vogt states that the idea of The Innocents came to him as he became fascinated with the idea of not knowing what sort of “secret life” his children had when they were not being watched. They may seem innocent and sweet, but who knows what they could be up to when they’re out of your view; this is where the horror of The Innocents comes from. Making any film with an almost exclusively child-driven cast is a daunting task, let alone a horror film. The children that are at the forefront of The Innocents are simply extraordinary. Rakel Lenora Fløttum plays a nine-year-old girl named Ida, whose curiosity around her autistic sister and strange new friend often land her in trouble with her parents. Leading a film at nine years old is impressive enough, but leading a film as visually focused as The Innocents, is even more applaudable. There is very little dialogue here, so there is a lot of pressure for these young actors to portray their emotions using solely their expressions rather than words. Alva Brynsmo Ramstad (Anna), who plays Ida’s non-verbal autistic sister, does just that. Her performance is realistic, respectful, and powerful at all the right moments. How autism is treated here, without spoiling too much, is carefully portrayed from a unique point of view.

Can a child be truly evil? This is the question asked by The Innocents. The film’s only real classifiable “villain” is Ben, played fantastically by Sam Ashraf. Your mindset will most likely jump from conclusion to conclusion over the actions committed by Ben. An act of animal abuse against a cat, in one of the film’s more difficult to watch sequences, sparks the notion of whether or not children can perceive the difference between right and wrong or if a sense of empathy or morals is even possible at such a young age. Ben’s upbringing implies possible abuse by his mother, but the film cleverly portrays this rather subtly. The film does not give you any easy answers and instead leaves it up to your own interpretation. As Ben becomes more accustomed to his powers and begins to bring more pain to those around him, it’s up to Ida and Anna to stop him in a heartstopping finale.

The Innocents is a confident, self-contained and ambitious horror that relies on atmosphere and performance to get under your skin and leave a powerful impact.