By the 1970s, Hollywood legend Bette Davis still commanded a formidable amount of power. For the films she agreed to star in, she still held approval over the script, her co-stars and, most coveted of all, the final cut. Yet the problem was that the kind of films Davis was being offered were a long way from the glamorous prestige of her glory years. Gone were the offers of roles akin to Now Voyager or All About Eve; indeed, throughout the 1960s, Davis had instead pursued something of a horror fetish, appearing in Robert Aldrich’s classic Whatever Happened to Baby Jane alongside a couple of memorable roles for Hammer, including The Nanny and The Anniversary.

Not that it bothered Davis too much, one would assume. Always an actress drawn to meatier, darker roles as opposed to frequently bland ‘heroine’ love interests, the theatrically trained Davis continued to deliver strong, iconic performances, even if the films they appeared in were unlikely to ever win her another Oscar.

This trend was bucked slightly by the 1970 drama Connecting Rooms, which saw Davis return to a more traditional dramatic role. Newly released this month by Indicator, Connecting Rooms also proves to be an unusual outlier in Davis’ filmography, where she eschews her usual sharp edge for something altogether softer, kinder and more tragic. 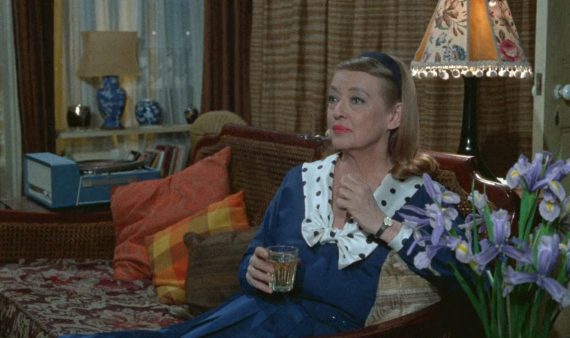 Written and directed by British filmmaker Franklin Gollings, Connecting Rooms is based upon The Cellist, an un-produced play by Marion Hart. The premise is simple. Wanda Fleming, a concert cellist, lives at a rather run down and seedy West London boarding house, run by the nosey Mrs. Brent (Kay Walsh). Aside from her music, Wanda derives most of her pleasure from the frequent visits made by Mickey Hollister (Alexis Kanner) a very good looking, yet coldly opportunistic, aspiring music producer. Yet things soon change with the arrival of James Wallraven (Michael Redgrave) a disgraced former school teacher harbouring a dark past. With their two rooms sharing a connecting door, it is not long before Wanda and James’ lives become inextricably entwined…

Gollings (who cut his teeth working as a documentarian, as well as assisting legends such as John Ford) directs in a component, quietly assured manner. The film, perhaps not surprisingly, never quite manages to escape its stage bound origins but Gollings wisely doesn’t try to embellish the material with too many directorial flourishes, instead letting the actors take centre stage. 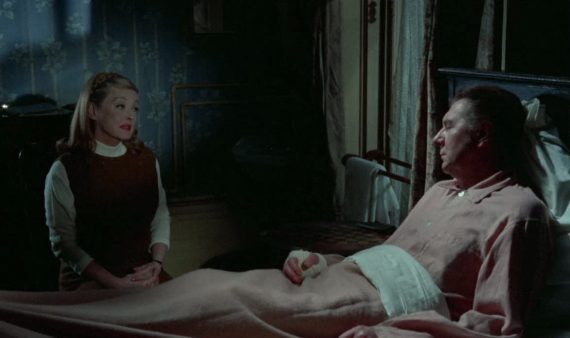 With performers such as Davis and Redgrave in the lead roles, it would be hard not too. Despite being the bigger name, it is notable that out of the two, it is Redgrave who has the larger and more dynamic part here. He also manages to work wonders with it, combining fear, sorrow and rage into a powerfully emotional and empathic whole. Quite simply, he steals the show.

Perhaps more interesting, however, is Davis showcasing a softer side that stands out in contrast to her more typically abrasive performances. Her Wanda is almost as heartbreaking as James, as she lives out a fantasy that feels all too fragile. Connecting Rooms proves to be a late career gem for both legendary actors, each being allowed to exhibit different shades of established screen personas with great success. They are ably supported by a strong supporting cast. Kay Walsh makes the most of her limited screen time as the bossy, mercurial landlady, while both Olga Georges-Picot and Gabrielle Drake (sister of cult musician Nick Drake) as the two love interests of Alexis Kanner’s Mickey, frequently manage to outshine him in their few scenes together.

In fact, it is Kanner who is the weak link here. Looking like John Lennon’s stunt double, he manages to nail the opportunistic side of his character, yet when presented with more emotional scenes, his performance lacks the depth of his more seasoned co-stars. 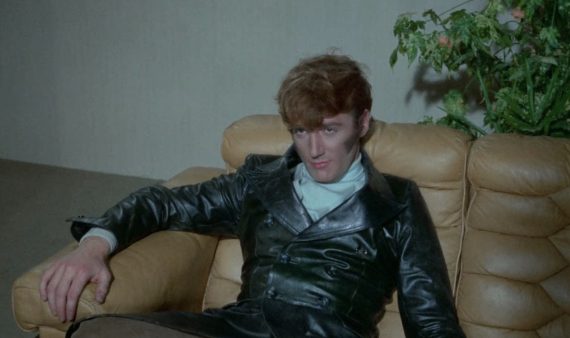 Connecting Rooms is also interesting in that it offers us an alternative view of Swinging London in the late Sixties, capturing a world that feels staid, dull and alien compared to the stereotypical gaudy optimism that defined so much of the era. With a seedy boarding house at its heart, along with its melange of sad, broken characters, Connecting Rooms owes almost more to the grim, alcohol soaked novels of Patrick Hamilton than it does to the glitz and glamor of Carnaby Street.

Yet Gollings skirts away from making his story too depressing. Connecting Rooms is a film about sad and lonely people, yes, but by the end credits, he has created a story about connecting in more than just the literal sense, showing that glimmers of light always exist within the darkness.

Connecting Rooms is being released by Powerhouse Films on their Indicator label. The film has been restored in 4K and looks great in HD on the Blu Ray disc. This isn’t the most visually spectacular film you’ll ever see, but the picture here looks film like and authentic. As ever with Indicator discs, the encode was faultless as far as I could see. Audio, which is presented in its original mono, is perfectly clear and sharp.

This isn’t the most stacked Indicator disc I’ve ever seen. The extras are as follows:

The key extra here is the half an hour audio interview with Bette Davis herself, recorded a year after Connecting Rooms’ release. This interview isn’t specific to Connecting Rooms and instead presents us with a career overview, where Davis offers her thoughts on everything from here earliest roles to general thoughts on acting. A lot of ground is covered in the half hour and Davis appears to be in a fine humour, frequently making comments that make the audience burst out in laughter and applause – this is a great and worthwhile listen, although Davis’ comment that woman are unsuitable to be film directors hasn’t dated well.

The other two substantial extras are two short documentary films directed by Franklin Gollings, one centred on English country fairs, the other on Wimbledon. As well as showcasing Gollings ‘skill as a documentarian, both of these are interesting watches in their own right as time capsules back to the early fifties.

The disc is rounded out with a trailer, an image gallery of promotional materials (which heavily favours many shots of a scantily clad Gabrielle Drake, despite her relatively small role in the film) and a touching written tribute to Davis written by Gollings a few days after her death in 1989.

Indicator include one of their high quality booklets as well, which contains a short but highly readable critical essay on the film, an interesting press kit (including reference to an actress who may have been cut from the film due to a mysterious disappearance), short interviews with Davis and Gollings, as well two brief appraisals of the two documentary shorts on the disc.