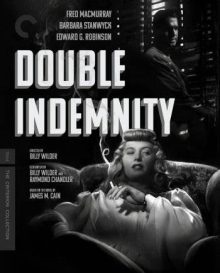 Billy Wilder’s career as both a writer and director is long and varied but, due to the dominance of Some Like It Hot in his legend, he is often thought of as primarily a director of comedies. I’ve always been baffled by how the comparatively crass, raucous cross-dressing comedy Some Like It Hot could have overshadowed so many infinitely better films in Wilder’s catalogue but it is perhaps more frustrating that its reputation has resulted in a reductive view of a director who, while a comedic master, was also adept at the dramatic. None of this is to belittle the art of comedy. I’ve always been of the opinion that not only is it an undervalued genre but also that it’s probably the hardest to get right (it’s also, incidentally, my favourite genre, my bewilderment at the supposedly hysterical Some Like It Hot notwithstanding). But this retrospective misconception about Wilder often means that people are surprised when they eventually get round to his 1944 Noir masterpiece Double Indemnity when, in fact, he was the perfect person to write and direct the film around which the grim, fatalistic tone of the Noir genre crystallised.

Double Indemnity was Wilder’s third Hollywood film as director and comedy had not yet become dominant in his directorial filmography. His next film would be the bleak examination of alcoholism The Lost Weekend, followed by Death Mills, a short documentary about the Holocaust. Even when the Wilder catalogue shifted prominently towards comedy, these were usually comedies with a decidedly dark edge. A Foreign Affair, for instance, is a love triangle in which one of the participants is an ex-Nazi. Stalag 17 is an often broad goof set in a German prisoner of war camp. Themes such as suicide (The Apartment), adultery (Kiss Me, Stupid), prostitution (Irma la Douce), drug dependency (The Private Life of Sherlock Holmes) and the Cold War (One, Two, Three) permeate Wilder’s comedies, making them some of the most substantial of their era. Even Some Like It Hot kicks off with a Saint Valentine’s Day Massacre inspired murder. But if Wilder’s comedies are shot through with dramatic subject matter, it’s notable that his dramas are also laced with a blackly comedic wit that makes them stand out amongst the more earnest fare of their contemporaries. It is this ear for the absurdity of the deadly serious that helps the likes of Sunset Boulevard and Ace in the Hole assert themselves as among the best films ever made. And it’s what makes Wilder the perfect choice to helm Double Indemnity. 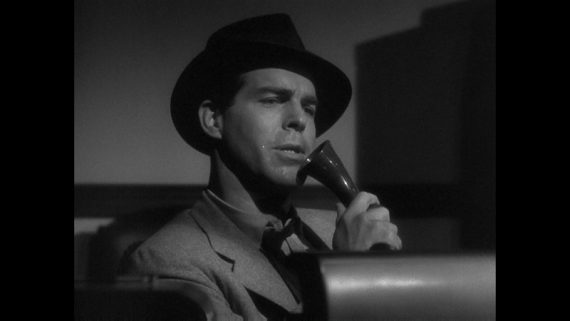 Double Indemnity is based on James M. Cain’s novel of the same name, which the Hayes Office had twice deemed too seedy to adapt for the screen. Wilder knew he could make it work and he and his regular writing partner Charles Brackett wrote a treatment that convinced the censors that it was possible. Unfortunately, in the process Brackett convinced himself that they’d been right in the first place and bailed on the project. Left with the task of writing a screenplay alone, Wilder wisely sought a writing partner who would be more familiar with the sort of hard-boiled dialogue that this story demanded. His choice was Raymond Chandler, a contemporary of Cain’s in the detective novel genre, and while their collaboration was far from a happy one, it resulted in one of the most remarkable screenplays of the 40s. Wilder’s natural wit is filtered through Chandler’s hard-faced style by way of Cain’s sordid characters to create the perfect combination. Had Wilder attempted this difficult mix alone, it probably would’ve emerged as pastiche. With Chandler’s input, the screenplay solidifies into a thing of brilliance. If there is still sometimes an inclination towards laughter from the modern viewer, that is only because this specific example of the genre is so indispensable that it has become the subject of copious parodies across the decades.

With such a dynamite script in place, casting was crucial. The unpleasant characters at the centre of Double Indemnity were not the sort of roles the image-conscious stars of the day actively pursued and many big names turned down the lead role of Walter Neff, the insurance salesman drawn into a murder plot. Neff wasn’t only problematic because of his villainy; he is also a weak, easily manipulated and not especially bright character. Wilder was asking actors used to playing squeaky-clean heroes to take on a complex and unpleasant role. But Neff starts out as a relatively normal man who allows his worst qualities to be drawn out by his attraction to a client. Wilder knew he needed someone who audiences could see as a nice guy for the corruption to have full effect. Fred MacMurray, a square-jawed star of light comedies, was persuaded to take the role even though he thought it beyond his abilities. As it turned out, it was one of his greatest roles, emerging as a sort of variation on the traditional good guy, delivering voiceover narration and providing the film with a viewpoint but saying and doing things that characters playing that narrative role very rarely said or did. MacMurray is good, trading on his clean-cut image in a way that makes Neff appear even more sleazy than he does on the page. 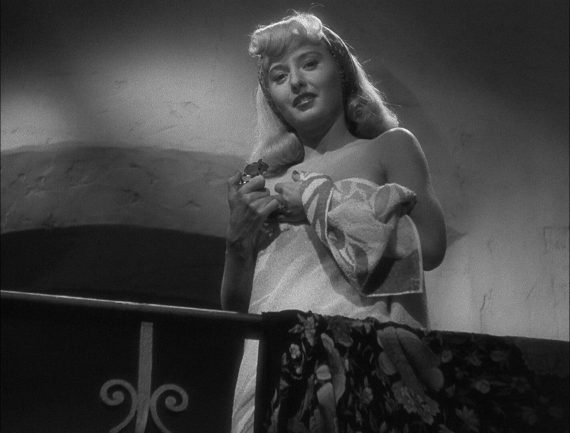 If Neff was a hard role to cast, the quintessential femme fatale Phyllis Dietrichson ought to have been nigh on impossible. Fortunately, Wilder’s extremely shrewd first choice for the part overcame her initial misgivings and accepted. One of the biggest box office draws of the era, Barbara Stanwyck adored the script but feared for what it would do to her reputation. Wilder challenged her, asking whether she was a mouse or an actress, and Stanwyck went all out to prove she was the latter, bagging an Oscar nomination in the process. Phyllis is an iconic film figure but not in a glamorous way. Though she captivates Neff from the off, Wilder and Stanwyck deliberately make Phyllis more repugnant than alluring. This was no mean feat, given Stanwyck’s dazzling unconventional beauty and charisma. But by crowning her with an unflattering but memorably trashy blonde wig and having Neff’s instantaneous captivation with her centre around a tacky anklet, Phyllis is immediately and indelibly grotesque. Stanwyck knows exactly how to play up this unglamorous angle and she does so with a fearless dedication. Her take on Phyllis feels like a vice personified, the human version of smoking, a disgusting addiction that you can’t get out of your hair and clothes afterwards.

Though he is a much less morally compromised creation, the third lead, claims adjuster Barton Keyes, is my favourite character in Double Indemnity and he is played superbly by Edward G. Robinson, who I’ve always felt should’ve been Oscar nominated too (like MacMurray, Robinson never got nominated despite a long, iconic career). While Keyes is generally a decent man, actors of the day may have objected to taking the role based on how the friendship between Keyes and Neff is blatantly positioned as the film’s central romance, a wholesome tonic to its sordid, lustful alternative. The screenplay has both characters all but openly admit their love for each other, at first in a subtext-loaded moment of jocularity but eventually in a deeply moving echo of that scene in which the subtext becomes the text. To his credit, Robinson’s only objection to the role was that it was smaller than that of his co-stars but he certainly doesn’t make it feel that way, with many of the best scenes involving Keyes. Robinson ultimately said he accepted that at his age it was time to start settling into character roles, although the fact he was paid the same as his co-stars probably helped too. 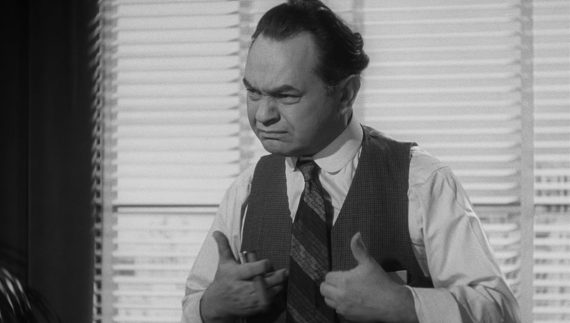 Double Indemnity’s tale of murder, adultery and insurance policies is twisty enough to please but not difficult to follow. There’s ample suspense and oodles of moral ambiguity to keep first time viewers riveted and Wilder directs with a keen eye for atmosphere, evoking the grimy feel that so many lower-budget Noirs stumbled on accidentally. For those who have seen Double Indemnity before, there’s always the incentive to come back again in those performances and particularly that screenplay, which you can listen to with the same rhythmic pleasure that music brings. It’s a classic of cinema and it’s always wonderful to see it reissued, in the knowledge that someone else will soon find it and fall in love with it for the first time.

Double Indemnity is released by Criterion on Blu-ray on 30 May 2022. The generous special features include the excellent Billy, How Did You Do It?, a three hour, three part documentary about Wilder’s life and career, featuring interviews with the man himself.

The full list of special features is as follows:

New 4K digital restoration, with uncompressed monaural soundtrack
In the 4K UHD edition: One 4K UHD disc of the film presented in Dolby Vision HDR and two Blu-rays with the film and special features
Audio commentary featuring film critic Richard Schickel
New interview with film scholar Noah Isenberg, editor of Billy Wilder on Assignment
New conversation between film historians Eddie Muller and Imogen Sara Smith
Billy, How Did You Do It?, a 1992 film by Volker Schlöndorff and Gisela Grischow featuring interviews with director Billy Wilder
Shadows of Suspense, a 2006 documentary on the making of Double Indemnity
Radio adaptations from 1945 and 1950
Trailer
English subtitles for the deaf and hard of hearing
PLUS: An essay by critic Angelica Jade Bastién