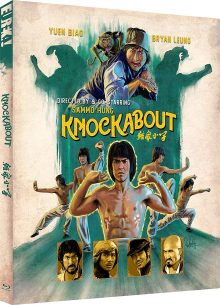 Yuen Biao (or rather Hu Ling-chan, to give his birth name) was sent to the China Drama Academy by his hard-up parents reportedly so they would have one less mouth to feed (he was one of eight siblings). It was there, under the brutal tutelage of master Yu Jim-yuen, that he met Sammo Hung, Jackie Chan and the rest of the Academy’s ‘Seven Little Fortunes’ troupe, many of whom would go on to successful careers in the film and entertainment industry. The ‘brothers’ remained fairly close (despite a few fallouts over the years) and would often work together during their ‘glory days’.

Golden Harvest saw potential in Yuen after Sammo and Jackie’s stardom had begun skyrocketing. He’d been working in the background as a stuntman for years, but Golden Harvest felt he had the potential to be another big star and Knockabout was the film designed to introduce Yuen Biao as a leading man. With Sammo showing great promise as a director too at this stage, it made sense to assign him to work behind the camera on his ‘little brother’s starring debut, so the pair worked together on this pivotal film in Yuen’s career. 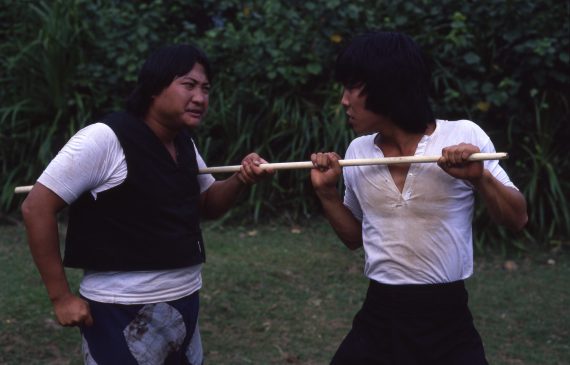 It did good, if not exceptional, business, helping lead Yuen Biao to another handful of well-loved leading roles soon after, in Dreadnaught, The Prodigal Son and Zu Warriors From the Magic Mountain. Having already released all three of those titles on Blu-ray, Eureka are heading back to the start and bringing us a shiny new release of Knockabout. I eagerly picked up a copy, having seen and enjoyed the film in the past, and my thoughts follow.

Knockabout sees Yuen play a grifter named Yipao, who goes around town conning anyone he can, with the help of his brother Taipao (Leung Kar-yan). After they lose the takings from a big con, they find themselves in dire straits and try to run a classic grift in a restaurant, using Taipao’s beloved jade ring, to get back on track.

Unfortunately, they pick the wrong person to con, as Koo Wu-Tai, a.k.a. Silver Fox (Liu Chia-Yung, better known in the West as Lau Kar-Wing) is on to them, causing their devious plan to fall flat on its face. 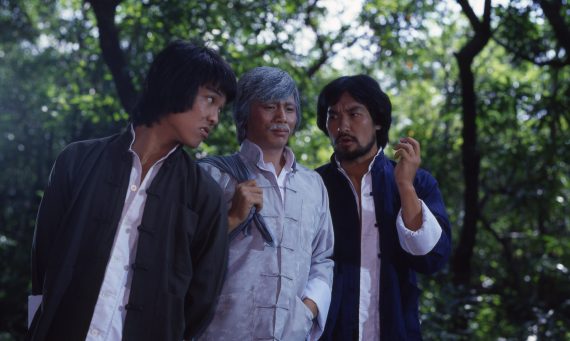 When the brothers approach Silver Fox afterwards to get their ring back, he easily fights them off. Defeated but undeterred, the brothers beg Silver Fox to teach them his kung-fu skills, so they can use them to their financial benefit, of course. He eventually agrees and the pair train to become decent fighters.

One day, however, Yipao discovers Silver Fox’s true colours and a tragic event causes him to look for further martial arts training from a troublesome but highly skilled beggar, played by Sammo Hung.

I had fond memories of Knockabout but hadn’t seen it in a while. As such, I found myself a little disappointed during much of the first half of the film. The comedy takes centre stage over the action here. This isn’t necessarily a bad thing, as Yuen and Leung Kar-yan make a good double act and there are some genuinely funny, albeit very goofy, gags here as the pair swindle everyone they meet. However, I had a hazy memory of some superb action scenes, so was waiting for those and the lack of narrative focus in the first half causes it to feel a little meandering, even if the on-screen hijinks seem frantic. 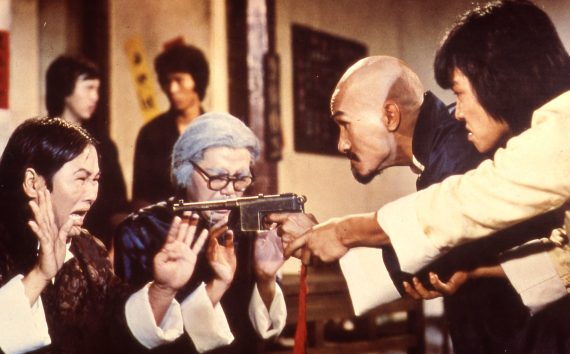 I needn’t have worried though, as my memory wasn’t failing me. There’s a big twist in the middle of the film that completely turns it on its head, laying a bit of a damper on the comedy, providing a strong dramatic focus and, most importantly, paving the way for plenty of kung-fu fights.

The action comes thick and fast in the second half and gets better and better as it goes along, leading to a blistering finale containing some superbly choreographed fighting. Knockabout was designed as a showcase for Yuen Biao’s acrobatic skills and Sammo’s history with the actor meant he knew exactly what he was capable of and best at. As such, the film is filled with physics-defying feats of physical prowess. The solo demonstration of styles Yuen gives after his training with Sammo’s character are stunning in themselves, not to mention his stamina training doing the same moves whilst using a skipping rope.

It’s mind-blowing stuff, that’s heavily influenced by Yuen’s Peking Opera training, as is the broad, largely physical comedy in the rest of the film. There’s a lot of slapstick and tumbling throughout, which again plays to Yuen’s strengths, as well as Sammo’s. 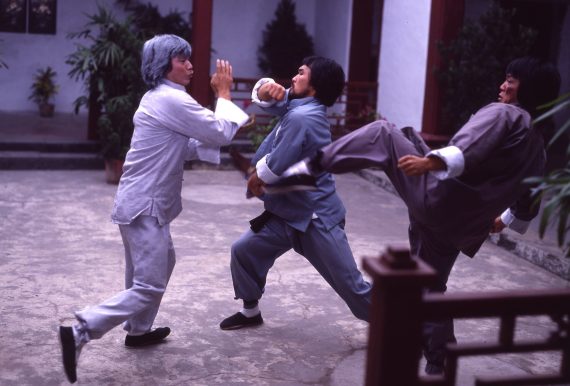 It’s a wonderful cast in general, with plenty of faces that will be familiar to kung-fu film fans, on top of the four leads. The legend that is ​​Lau Kar-Wing (look up his credits on IMDB, there are too many classics to mention) is particularly good and he gets to show off his considerable skills in a major role. Sammo and Leung Kar-yan’s buddy Karl Maka has a memorable minor part too, stealing the show in a couple of silly con-man sequences.

So, a fun but largely aimless first half leads into a thrilling, action-packed second half that shows off the skills of the film’s principles, all legends of the genre or legends to be, in Yuen Biao’s case. It’s a definite must-watch for kung fu fans, just give it a little time to hit the higher gears.

Knockabout is out on 25th April on Blu-Ray in the UK, released by Eureka as part of their Eureka Classics series. The film looks fantastic, with rich, natural colours, sharp details and no damage. Audio seems solid too and you get three choices of soundtrack, the original Cantonese or two different English dubs, one the classic track with previously missing scenes in Cantonese and the other a newer dub. 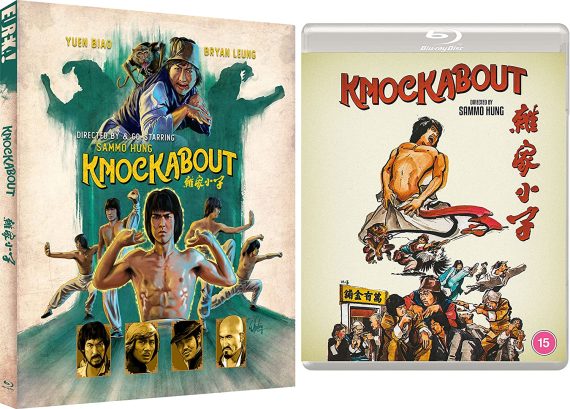 Frank Djeng is joined by Michael Worth again on his commentary track, as on the Dreadnaught disc (presumably these were recorded together), and, as usual, there’s a second commentary from Mike Leeder and Arne Venema. With the commentators providing tracks for dozens of recent kung-fu Blu-ray releases, there’s a fair amount of repetition of facts and stories between discs, but those guys do a great job, nonetheless, and I always enjoy listening to them.

The archive interview with Sammo is around 7 minutes long and he talks about Yuen Biao and how he trusted him to take a leading role here, due to their history together. He also discusses the rest of the cast that was assembled and how he was originally going to play the Leung Kar-yan role but gave it to his friend instead and created a new, smaller role for himself as the beggar. 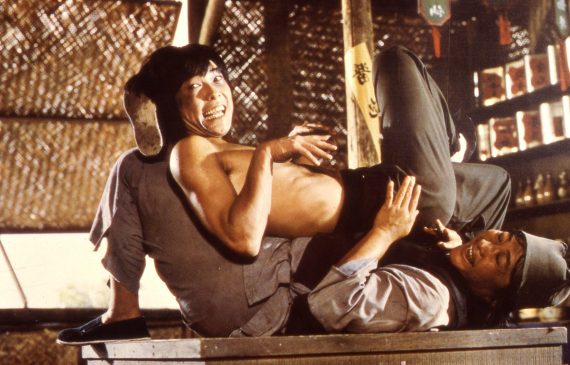 In Leung Kar-yan’s own archival interview, also around 7 minutes long, he talks of how Knockabout was his first comedic role. He also talks about how demanding it was to make kung-fu movies back then.

The Chan Sau Chang piece gives a fascinating history of monkey kung-fu and associated styles. Chang is full of enthusiasm too, relating numerous stories of how he’s used monkey style in practical situations over the years.

Finally, there’s a real treat of a deleted scene. Used as a Japanese teaser trailer, back when the film was first released, it starts as a traditional martial arts demonstration against a red background, in the Shaw Brothers style. However, Sammo soon enters the scene and gives it a comedic twist. It’s a superbly performed sequence, so I’m pleased it was found in the archives.

In the booklet, James Oliver provides another informative essay that gives a solid background on the film and Yuen Biao in particular. There’s plenty of nice archive promotional material in there too.

So, Eureka, once again, knock it out of the park with another one of their kung-fu releases. Fans should order it straight away, if they haven’t already.