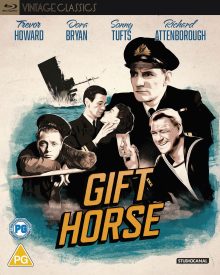 Throughout 1941, Britain must have felt that she was fighting the Second World War all by herself. The Nazi war machine had conquered most of mainland Europe with shocking, devastating speed, while Britain’s key potential alley (and the only country with the finances and industrial might to challenge the Axis powers) was resolutely trying to keep herself from being drawn into yet another European conflict.

While Hitler’s eyes were set firmly on Russia, he wasn’t content to just ignore Britain altogether. While a full scale, seaborne invasion had been called off, Hitler tried to break British moral by a dedicated bombing campaign whose key aim was to raze the population’s willingness to fight as much as it was to destroy cities. When the country’s resolution held firm, however, Hitler tried another tactic, this time taking aim at Britain’s Achilles Heel.

Being an island, Britain was dependant on shipping and imports for everything from food to raw materials. Cut those imports off, and it would not be long before Britain was starving and vulnerable. Therefore, Hitler deployed his fleet of U-Boats to attack and sink all the shipping conveys that were delivering vital supplies. Without enough battle ships to protect the convoys, Hitler’s tactic seemed to be working; at points during 1941 it certainly seemed that Britain might actually be falling to her knees.

Yet, by 1942, there was a slight saving grace. After the Japanese attack at Pearl Harbour, the US had entered the war. While it would be a few years before her full might would be felt, the one thing she did immediately do was provide Britain with an additional 50 battleships (albeit many of them were rather old) in order to help protect the vital conveys sailing across the Atlantic. Gift Horse, the 1952 film starring Trevor Howard and Richard Attenborough and which details the life of the British crew aboard on of these American ships, is being newly released by StudioCanal this month for their Vintage Classics line. The Battle of the Atlantic has certainly inspired some phenomenal war films over the years, from the British classic The Cruel Sea to Wolfgang Peterson’s peerless Das Boot. It is fair to say that Gift Horse certainly faces some stiff competition.

There is great potential though. After we are introduced to Trevor Howard’s Lieutenant Commander Alginon Fraser (who instructs his new crew, looking rather disappointed at the state of their old American  battleship, to ‘never look a gift horse in the mouth’) director Compton Bennett and screenwriter William Fairchild (Fairchild also wrote and directed The Silent Enemy,  StudioCanal’s other WW2 release this month) follow the trails and tribulations of life both on sea and on land for the crew of the Gift Horse, all leading up to ship’s key role in the thrilling and daring Operation Chariot, a plan to destroy the dry docks at St Nazaire that were so vital to German shipping.

Anyone expecting a full blooded war film out of Gift Horse might want to check their expectations at the door. While there are a few instances of action at sea, Compton and Fairchild’s main interest is in charting the life of the ships crew, conjuring drama not out of clashes at on the water but rather out of clashes of personality. The film focuses both on the ships officers and on the lower ranking crew, with Trevor Howard and Richard Attenborough being lightning rods for most of the film’s drama. In a rather heavy handed underdog metaphor that aligns Howard’s captain to the titular ship, Lieutenant Commander Alginon Fraser is a disgraced sea commander who, very much like the Gift Horse, has been given a second chance. Yet his reputation and occasionally reckless decisions rankle some of his officers, especially James Donald’s Richard Jennings. Attenborough, meanwhile, plays a slightly subversive lower ranking crew member with a love of trade unions, who likes nothing more than to try and get under his superior’s skin with an almost fanatical adherence to rules and regulations.

There are a few interesting supporting turns. Sid James provides a fun cameo as a barman, but the most eye opening is Bernard Shaw playing it rough and tough as a cockney seaman, a million miles away from the upper class exasperation he employed playing James Bond’s boss.

Gift Horse should be praised for its focus on the lives of the ship’s crew. Rather than turn in a generic war film filled with blood and thunder, it instead offers an alternative but no less vital perspective on what it means to fight a war. The problem, however, is that this alternative view is presented in a dry, benign manner that offers almost no significant drama or emotion. Tragic events are depicted almost as a box ticking exercise, with the characters who suffer them almost magically forgetting they ever happened in the very next scene (although it has to be said that Howard, when called upon, does lend a key moment a quiet, tragic grace). Gift Horse also suffers due to the fact that its plot and subject matter align very closely to 1953’s vastly superior The Cruel Sea. Where the latter film truly achieves a sense of pathos and futility, establishing it as one of the most honest and devastating war films ever made, Gift Horse, with its staid, unconvincing drama and slight, breezy plot, can only suffer by comparison.

It is also hampered by some frankly abysmal special effects. Clearly a film made in the early 1950s is never going to provide spellbindingly convincing VFX, but that is where the willing suspension of disbelief comes into play. Yet that is very hard to achieve where some effect shots depict battle ships floating almost 20 feet off the ocean…it all helps in making Gift Horse feel, along with its plot, occasionally like a cheap, rushed affair, lacking conviction and substance.

Its final fifteen minuets tires to appease the more war mongering members of the audience with action and explosions and at one point you feel that the film may actually achieve a moment of true poignancy, something it has been trying to do for almost 90 minutes. Yet a jarring, forced tone at the very end serves to ensure that Gift Horse remains interesting but slight addition to British war cinema rather than an essential watch.

StudioCanal are releasing Gift Horse on Blu Ray and DVD on the 11th April. Like many of their restorations, Gift Horse looks glorious, full of sharp detail and great contrast. There is no getting around the cheapness of the special effects however, which does bring the quality down in places. No doubt though that StudioCanal have done they best they can with the material they had.

There are only a few extras on the disc. The most meaty is a 20 minute interview with historian James Dorrian, who provides an interesting history of the real Gift Horse as well as the raid on St Nazaire. Definitely worth a watch to provide additional context for the film. Rounding off the package is a Pathe news reel film commemorating the 5 year anniversary of the raid in 1937, along with an original trailer and a brief photo gallery of behind the scenes stills.