The 20th Century proved to be a tumultuous period for conflict and war in Ireland. The early part of the era saw The Easter Rising in 1916, followed several years later by the Irish Civil War. The latter part of the century was of course defined by The Troubles in Northern Ireland, which finally culminated in peace with the signing of the 1998 Good Friday Agreement.

There have been a fair few films covering these two different time periods, from Ken Loach’s Palm d’Or winning The Wind that Shakes the Barely, to Jim Sheridan’s Danial Day Lewis vehicle In The Name of the Father and Yan Denamge’s underrated and agonisingly tense thriller ’71. Perhaps because both history and cinema tend to focus predominantly on these two key eras in Irish and Northern Irish history, it is easy to forget that Anglo Irish conflict and tension actually permeated throughout most of the 20th Century. Quite a few people may be surprised to learn, for example, that the IRA were operating in England during the Second World War. It is during this unusual time period that we find Basil Dearden’s 1951 nourish Ealing melodrama The Gentle Gunman taking place, shedding a light on an aspect of Northern Irish history that cinema doesn’t often choose to illuminate. Armchair historians shouldn’t get too excited however. Dearden’s film very much uses Irish and English politics as a backdrop to his thriller, rather than letting them become a defining part. The film focuses on brothers Terry (John Mills) and Matt (Dirk Bogarde), two IRA foot soldiers looking to further the IRA cause during the height of The Blitz. Yet Terry is starting to have misgivings and doubts about remaining within the organisation. When Matt is asked to help break out two IRA prisoners, Terry tries to convince his brother otherwise, even going so far as to take matters into his own hands… 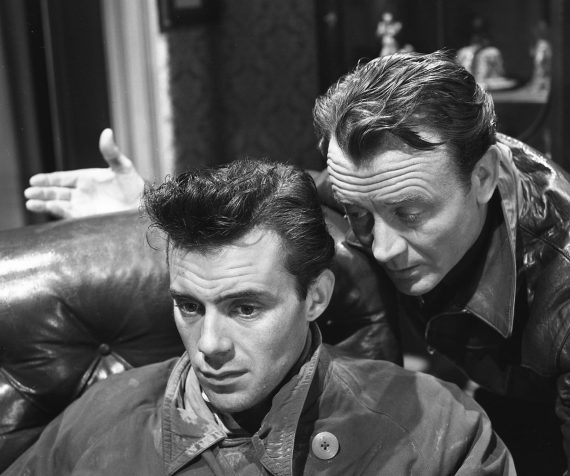 The Gentle Gunman was written by Roger MacDougall, based upon his earlier stage play (MacDougall’s plays were clearly popular at Ealing Studios around this time; The Man in the White Suit, based upon another of MacDougall’s plays, came out the same year as The Gentle Gunman). The film’s political interests are foregrounded right from the start, where two old men, one Irish and one English, discuss the legitimacy of English rule in Ireland. Yet both MacDougall and Dearden treat this discussion (as well as subsequent ones) with a light hearted, almost comic tone. Despite opening with this gentle political commentary, very soon Dearden allows his characters and noirish plot to dominate, with The Gentle Gunman never forgetting to be a briskly paced thriller first and foremost. Dirk Bogarde and John Mills deliver fairly engaging performances (although both are let down by some rather ropey Irish accents, with Mill’s attempt especially bad, seemingly taking in a tour around the British Isles by way of Belfast). While both actors were big names at the time, Bogarde’s role certainly plays second fiddle to John Mill’s more commanding and dominant older brother. In fact, Bogarde’s performance in The Gentle Gunman feels rather restrained, his character coming across as ineffectual and subdued for most of the running time, certainly standing in marked contrast to his more violent and belligerent turn in The Blue Lamp. Robert Beatty, playing committed IRA commander Shinto, arguably makes the biggest impression out of the central three characters, playing his role with a steely sense of cold determination.

The Gentle Gunman is very much a male dominated film. The two female characters, perhaps predictably, fall into stereotypes. Elizabeth Sellers plays the rather bland love interest, whose desire for the two brothers only seems to be motivated by how committed they are to the IRA cause. Barbara Mullen fares better, bringing a quiet dignity and pathos to her role of an embattled Mother trying to steer her family away from conflict and harm.

It doesn’t take long to realise, in fact, that the main star of The Gentle Gunman is actually Basil Dearden himself. One of the key British directors of the 1940s, 50s and 60s (helming such classics as Dead of Night, The League of Gentleman and Victim) The Gentle Gunman sees him reuniting with Bogarde on another crime film after the success of The Blue Lamp the previous year (a film which contained a death so shocking, a main character had to be brought back to life via a TV series). While Bogarde and Dearden’s work here isn’t as impactful as that previous effort (not to mention the groundbreaking homosexual drama Victim that they made almost ten years later) The Gentle Gunman remains an interesting and certainly unfairly forgotten component of Dearden’s filmography especially; the director really lets loose here, his energetic direction consistently elevating the film beyond the rather strained melodrama of its source material. The opening ten minutes are a perfect case in point, which sees Bogarde’s Matt attempt to plant a bomb on the London Underground, with thrillingly tense results. Utilising sharp, taut cutting, dutch angles and striking cinematography, Dearden steers the film with almost note perfect precision. It isn’t long before Dearden throws more impressive set pieces at his audience. A botched gunfight in a down pour feels particularly grim and noirish, while a late stage shootout feels just as thrilling and tense as any action set piece from today.

In-between these grander moments, Dearden and MacDougall ensure that the film never stagnates during its quieter, more character focused interludes, with Dearden continuously helped by Gordon Dines’ bold cinematography. The fact that the film utilises so many real locations, from urban streets to countryside roads, only adds to the visceral thrill. The Gentle Gunman should also be commended for its balanced and fairly realistic characterisations. For what still remains an incredibly divisive topic, the film remains remarkably sympathetic to its characters (and their arguments) on both sides of the political discourse.  Interestingly, it is the most obviously English character who comes off the worst, portrayed as both pompous and narrow minded  (this is perhaps explained by the fact that this character is played by Gilbert Harding, a man who had no love for the British Empire).

Despite The Gentle Gunman’s admirable attempt at balanced rather than shallow characterisation, as well as the thrilling direction, things aren’t always perfect. As a drama, the film does stumble occasionally, nowhere more so than in the final moments, which sees the culmination of the previous 80 or so minutes conclude with a weak puff rather than with a dramatic punch. It means that is hard to recommend The Gentle Gunman on its dramatic chops alone, with the film ultimately feeling, despite Dearden’s best efforts, like a bit of a damp squib as the credits roll.

Yet, taken in conjunction with Dearden’s bold, energetic direction and the unique time setting, and The Gentle Gunman certainly still stands out as one of Ealing’s more unusual and under appreciated dramas, one that we should be glad that Studio Canal has brought back into the public spotlight after all this time.

The Gentle Gunman will be released on both Blu Ray and DVD on 7th March. Newly restored for this edition, The Gentle Gunman simply looks glorious. Deep inky contrast (the scene in the rain looks particularly impressive) combined with a beautifully crisp and sharp picture, make it seem as if the film could have been shot yesterday. Sound is likewise clean and clear. Altogether this is a beautiful restoration.

There are only two extras on the disc:

The main attraction here is the conversation between critics Matthew Sweet and Phoung Le. Recorded as a Zoom conversation, this half hour chat covers a wide variety of subject matter, from the film’s awkward accents all the way through to its politics. It may feel fairly short, but this offers a great deal of interesting facts, context and analysis in its short running time.

A photo gallery is also included. This offers several great behind the scenes stills – I only wish there could have been more!