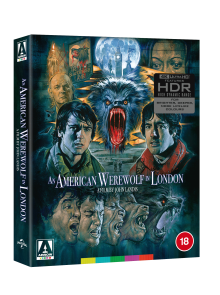 While on a hiking holiday in England, American students and best friends David and Jack fall foul of a strange animal on the Yorkshire Moors. Jack is killed and David is badly wounded, transferred to a hospital in London for treatment. As he develops a romantic relationship with his nurse, Jenny (Agutter) he begins to realise that the animal that attacked him may be something more, and when an undead Jack appears to tell him he’s turning into a werewolf, he starts to wonder if he’s going insane, or if the next full moon will bring about a more sinister transformation. 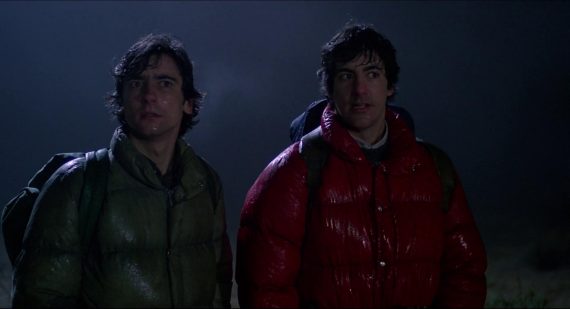 John Landis is arguably a director more clearly associated with comedy filmmaking, having lent his directorial vision to the likes of The Blues Brothers, Animal House and Three Amigo’s; and yet the directors name is also associated strongly with horror thanks very much to The Twilight Zone and this film, An American Werewolf In London, released in 1981.

To say American Werewolf is a “cult classic” is an understatement. Long held in high regard by both horror and comedy fans, its a film that manages to balance being both scary and funny in equal measures. Through its tight 97 minute run time, it manages to pack in both buddy and romantic comedy beats as well as some genuinely unsettling moments as David first hallucinates and then cuts a murderous rampage through London in his lycanthropic form. Ultimately though, American Werewolf is a tragedy. From the hostility that David and Jack face on their initial arrival to the pub on that fateful night, to the subtext of lycanthropy being akin to a sexually transmitted disease and the ultimate downbeat ending, American Werewolf, while a funny film, will most definitely not be everyone’s cup of tea.

Revisiting American Werewolf over 40 years later, the film is very much a time capsule of the early 80’s. London itself doesn’t feel like they busy, bustling metropolis visitors today would find, and everywhere seems far more tawdry and grimy. The horrendously tabloid adverts that David finds on TV as well as the adult cinema that serves as the kick off for the films gruesome finale feel almost antiquated in the internet era, but where the film hasn’t aged is in it’s still fantastic makeup and visual effects. 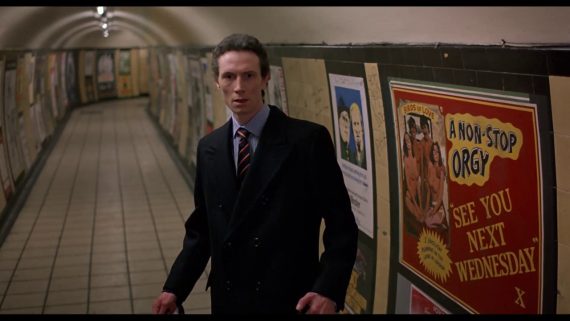 Rick Baker’s work on David’s transformation is still phenomenal, a visceral and painful looking mix of model and prosthetic work that is elevated by the superb sound mix that accompanies it, accompanied almost whimsically by Creedence Clearwater Revival’s Bad Moon Rising. The film fully embraces it’s horror aspects, taking them perfectly seriously even when playing them for laughs. When Jack reappears to David as a zombie like being that only he can see, the wounds inflicted on him by the werewolf that attacked both him and David are raw and gushing, and his slow decomposition over the course of the film is both hilarious and unpleasant.

All of this is, of course, displayed in glorious 4K HDR in this new UHD release from Arrow. The transfer is clear and bright and from the dark opening on the Moors to the bright Piccadilly Circus lights of the finale, the colours absolutely pop. The picture is detailed, with a good level of grain on display from the original film and not a hint of digital smoothing to be seen. The audio is also clear and crisp and should impress on just about every home cinema set up. It’s always fascinating watching older films on UHD, mainly to see just how well the newer transfers do the films justice and thankfully this one does not disappoint.

As with all of Arrow’s UHD releases, the bonus features here are reproduced from the previously released Blu Ray version of the film – that’s not a bad thing as they are extensive and informative, essential for any fan of the movie, but collectors will want to consider this before they double dip.