Slick and taught action thriller with a sci-fi twist, Spiritwalker is a fine slice of modern Korean filmmaking that propels along on mounting tension, a committed cast and a fun concept. Yoon Kie-sang stars as Ian, a man who finds himself suddenly jumping from one body to the next after a dangerous car accident. Every time at noon and midnight he finds himself taking over the body of another man (ala Quantum Leap and Fallen) seemingly at random and with no reason. At first suffering memory loss, Ian’s mind begins to come back to him and a pattern forms, as he seems to be jumping into the bodies of the men he either works with or has come into contact with recently: all seemingly implicated in a recent violent event. Has Ian been given a second chance to set things, right? Is he really dead? And how is he jumping from body to body? 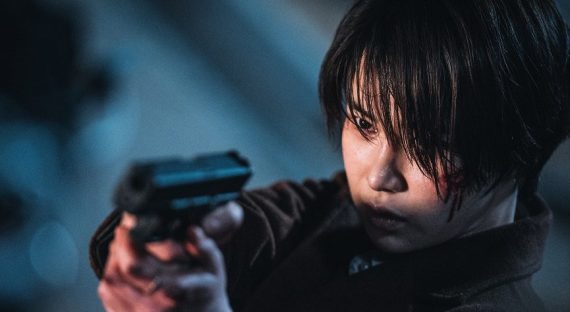 Knowing as little as possible going into Spiritwalker is a plus and makes the inventive film all the more surprising. The subject of body-jumping is given serious credence, no wink-wink at the camera it’s-all-a-bit-of-silly-fun cliches here but the makers make sure the film is never overly po-faced serious. In fact, it’s a thrilling ride as we are thrust straight into the lead characters predicament and are taken on the confusing and disorientating ride with him. Yoon Kie-sang gives a fantastic performance as the multiple characters he portrays and as his memory slowly recovers the plot slowly unfolds too, with Ian also discovering he has very gifted fight skills. This leads to several kinetic action scenes that pepper the mystery with writer/director Jae-geun Yoon orchestrating some fantastic hand-to-hand combat and gunplay scenes. Sharp, fierce and crisply choregraphed the action adds another dynamic level to proceedings.

Again, best to know as little about the plot as it all adds to the mystery and unfolding surprises. The sci-fi elements are light so don’t expect a full-on sci-fi pic, Spiritwalker being very much in the vein of a taught action thriller with characters suddenly thrust into hectic and dangerous circumstances. This adds propulsive vigour to events and at under 2 hours the film never stretches its concept too far. There’s been some criticism that the film is somewhat shallow and not overly complex, but this reviewer would have to disagree with this. Not every film has to have oodles of layers to be considered clever or worthy and there is an emotional punch throughout all the action and suspension of disbelief that adds grit to the high concept events

Spiritwalker is a clever, twisty and contained story featuring a small group of characters that is wrapped up nicely and executed with entertaining thrill.