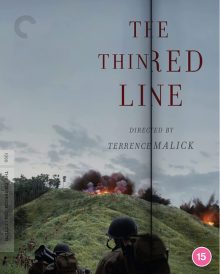 There was a time that Terence Malick was regarded as a mysterious genius. After making the incredible Badlands and Days of Heaven, he took a bit of a break, for about twenty years. News of him working with mere mortals on an epic war film was met with nothing but hushed reverence. The Thin Red Line only confirmed the legend, which was duly spoiled by him rushing into making the lovely but under-powered The New World a mere seven years later. It’s been downhill ever since with a run of pretentious, overblown films, so Criterion’s new (sort of) release is an opportunity to question its legacy. Does it deserve its reputation? Or has Malick’s more recent lamentable output made us cynical ?

If this is your first time watching The Thin Red Line, the hypnotic, quiet elegance of the opening scenes may catch you unawares. Especially as the menu suggests that you play it loud, on Malick’s recommendation. This is quite unlike any other war film; it is more concerned about individual men and their ways of coping with the sheer insanity they face. Based on a novel by James Jones, drawn from his own experiences fighting in the Guadalcanal campaign, it highlights the brutality of the war, contrary to the jingoist propaganda newsreels that formed the public view of WWII.

I’ve heard it suggested that Malick was making two different films at once. I think that’s accurate, but it was said like a criticism. On the contrary, it works. We’re watching an anthology of character driven stories that ebb and flow within each other. There is a mission, but it’s secondary to how the men and their environment react. It’s a painful, moving and engrossing film, such that the story is almost a distraction from the spell. It feels more Hollywood than Malick’s convention defying 70’s work. Maybe that’s down to the genre demands; familiar, yet unpredictable. Malick is in full command but gives us touchstones so we don’t lose focus. Because at 170 minutes with frequent drifts into dreamy contemplation of war, nature and man, narrative focus could have been an easy victim. It’s a war film for the more considerate and thoughtful Shawshank Redemption generation.

Still, we’re a hair’s breadth from pretentious pondering and literal navel gazing, so your experience may differ. Certainly it would be easy to dismiss The Thin Red Line as lacking cohesion. For me, there is nothing else quite like it. A phenomenal accomplishment by any standard and Malick’s last masterwork, before he retreated up his own backside and his cover as a reclusive genius was well and truly blown.

The Thin Red Line is a fabulous film and this package from Criterion is superb. Should you get it? Actually, probably not.

This is of Criterion’s typically high standard, but it is both a re-release of their US 2010 edition and has already been released on Blu-ray in the UK. None of the extra features are new and only the Melanesian Chants are missing on the old UK Blu-ray.

Despite this being the transfer with which some of us are already familiar, it is gorgeous. John Toll’s photography is a lovely balance of detail and contrast. A beautiful film in spirit and image. It’s bright and sharp, accentuating natural real colours, rather than adopting a palette, such as Spielberg’s Saving Private Ryan or Coppola’s Apocalypse Now.

Malick’s “play it loud” message is cleverer than you might imagine. This is a soundtrack that uses the full range of subtlety and bombast. Every scene swims with an aural landscape that’s constantly adjusting; the sound of wind brushing grass where gunshots were heard a moment before. When it needs to drop bombs, be assured, you know they’ve been dropped, but environmental sounds are perfectly handled too, and speech is centred and clear. Hans Zimmer’s score is one of his finest, occasionally when it comes to the fore, the combined effect with the image is sublime.

The film is a masterpiece and that deserves reassessment. The Criterion package is fantastic, but the release is a disingenuous one; a 2010 disc for a 2021 price. We need Criterion to push the standards of physical media, not rest on laurels.