Riffs on The Most Dangerous Game are always welcome with the likes of Hard Target and Surviving the Game leading the charge as great takes in the rich-bastards-hunting-people-for-fun-sub-genre. Apex Predator, despite having some good ingredients (sci-fi slant, Neal McDonough), isn’t a great take unfortunately due to sloppy execution, a distinct lack of action and Bruce Willis’ continuing lack of effort in these multiple low budget programmers he now seems committed to churning out.

There was potential for a fun actioner what with the futuristic vibe, the cool island setting, and Neal McDonough leading a bunch of tooled up douche bags in the hunt of Willis’ criminal looking for redemption. The island setting brings a nice visual touch and the weapons look cool but instead of a hunt and chase thriller what we get a lot of talking and posturing from the hunters (about how they are the best predators! Ugh!!), pointless scheming against one another instead of hunting Willis, and, well, just not a whole lot happening. The set-up should have led to some cool action beats but instead we just get a lot of talking and cringe inducing bravado that wastes the concept.

Willis only pops up in it intermittently seemingly having a lovely jaunt around the island (there’s even an odd interlude with comedy music as he wanders around talking to himself and eating berries!) and is obviously too disinterested and tired to even attempt any action scenes (with the characters even repeatedly referring to how over the hill he is! Oh, meta!!). Lochlyn Munro and Megan Peta Hill do bring a little personality to proceedings as two of the hunters but are either given too little to do or are killed off too quickly.

There are a couple of decent kill scenes, and the great Neal McDonough brings a bit of class and real menace but the muddled execution and Willis’s complete lack of engagement render what should have been a fun full-throttle B-movie, disappointing. 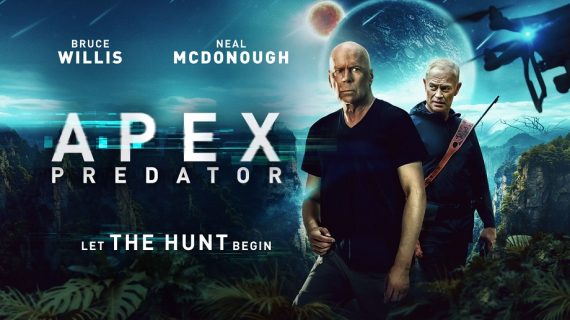