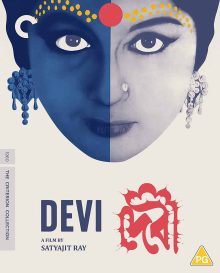 Many people first approach Satyajit Ray through his famous Apu Trilogy (and many sadly don’t venture any further) and though I first learnt of the director through reading about that set of films, the first title from his filmography I actually saw was Devi (a.k.a. The Goddess). I watched it far too late in life for someone who considers themselves a bit of a cineaste, but loved it and have since eagerly dug deeper into Ray’s filmography when chances have arisen, in order to catch up. As such, I’ve covered a few of his titles here at Blueprint: Review (https://blueprintreview.co.uk/?s=Satyajit+Ray&debug=false) and have yet to be disappointed by the filmmaker.

So, when Criterion announced they’d be releasing Devi on Blu-ray in the UK, I couldn’t resist taking them up on an offer for a review screener, to revisit the classic that first won me over as a burgeoning Ray aficionado. My thoughts on the film and disc follow.

Devi sees Sharmila Tagore and Soumitra Chatterjee play a young married couple, Doya and Uma, respectively. They are very much in love but Uma must live away from home for a while to study English. He asks Doya to come with him but she feels she must stay at the family home and look after Uma’s father, Kalikinkar (Chhabi Biswas). 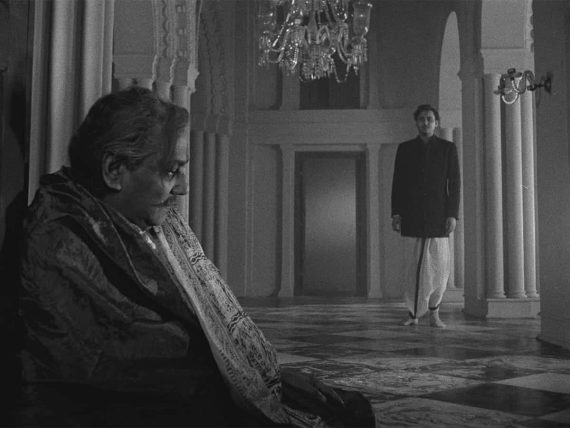 Kalikinkar and Uma’s young nephew Khoka (Arpan Chowdhury) both adore Doya but, for the former, this devotion takes a whole other meaning when Kalikinkar vividly dreams one night that the eyes of the goddess Kali intermingle with those of Doya. He takes this as an indisputable sign that Doya is the reincarnation of Kali and falls at her feet in worship.

Word spreads and holy men and other believers flock to the home to pray to Doya, who has, by this point, been moved to a quieter, more luxurious part of the house and is forbidden to perform her usual household tasks. She lives a lonely existence, with even Khoka now frightened to play with her as he used to.

Harasundari (Karuna Banerjee), Uma’s sister-in-law, is sceptical about Doya being Kali’s avatar though and writes to Uma, urging him to come home and see what has happened. 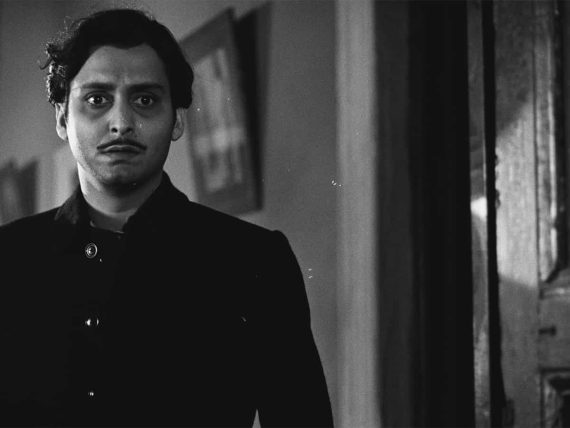 When Uma does return, he is shocked and doesn’t believe in this superstitious claim. He can see how the affair is affecting Doya too and tries to convince his father that the whole thing is just a figment of his imagination, so it can end.

However, when a dying child is miraculously revived after being placed in the arms of Doya and fed her holy water (the water left after washing her feet), it becomes harder to convince people that she is not a Goddess reincarnate. Uma even finds it difficult to take Doya away from the whole circus, as she’s not sure what to believe anymore.

Devi is based on a very short story by Prabhat Kumar Mukherjee (which in turn was inspired by an idea by Ray’s beloved scholar Rabindranath Tagore), so Ray had to flesh it out a fair amount in adapting it for the screen. In Ray’s hands the story became an attack not necessarily on religion itself but on religious dogmatism. Soumitra Chatterjee calls it an “angry film”, believing that Ray was criticising India’s superstitious beliefs and some of their backwards-thinking ideas. Supposedly, even now, in some small pockets of India, these types of beliefs remain, that people can be reincarnated Gods. As such, many in India criticised the film for its attacks, calling it ‘anti-religion’, which isn’t strictly true. 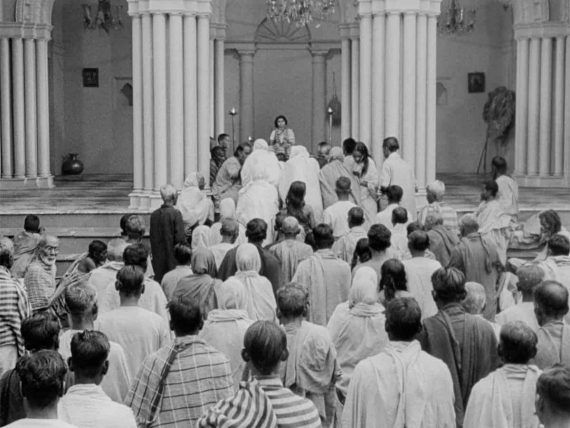 Being very much against dogmatic religion myself, Devi really spoke to my beliefs and opinions. It feels relatively balanced though, at least in its characterisations. Kalikinkar, who, in a sense, is the film’s antagonist, is not made out to be evil. He’s merely blinkered by his devotion to his religion and possibly a little senile in his old age and ill health. The rest of the characters are three-dimensional too and not without their flaws. Uma, for instance, follows his own kind of traditions, in how he travels away to study English, even though he has little need for the skill or qualifications as he will inherit a great wealth from his father. As such, he could have stayed with his wife and the whole situation might have been avoided.

Uma’s presence and actions also represent modern ideas that were being introduced to India in the 19th Century (when the film is set), and how they were set to overthrow the traditional beliefs of the country. With the film’s tragic ending, Ray is suggesting these new ideas weren’t enough to bring down the old ways though.

I also felt the film said a lot about the treatment of women in India (and elsewhere in the world, for that matter). Nobody listens to Doya or asks her opinion on the situation she’s hurled into, other than her husband. I felt that showing her being idolised and worshipped for what men believed her to be, without giving her a voice or respecting her for who she actually is, seemed to be making a strong statement in itself, on top of the comments on religious dogmatism. 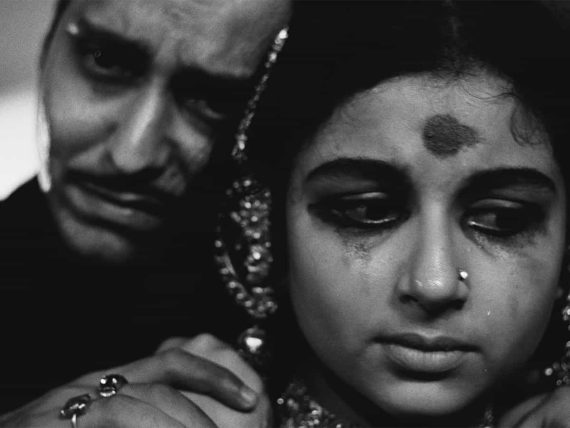 Devi is not purely a think-piece though. It works as a tragic love story too, so those particularly precious about their religious beliefs or uninterested in deeper readings still have something to latch on to. As always, Ray crafts very human characters and their trials become deeply moving as the film reaches its climax, ending on a poetic and slightly ambiguous final shot.

Devi looks beautiful too, with elegant, carefully composed cinematography that helps tell the story. The shots of Doya being worshipped are particularly powerful, with the exhausted young woman shown to be surrounded and trapped in frame by religious zealots.

Also adding power to these scenes and others is some brilliantly realised sound design. The deafening and maddeningly repetitive rhythms of the religious ceremonies are deeply oppressive. Great use is also made of Kalikinkar’s distinctive clatter as he moves around the house, signposting his every arrival. 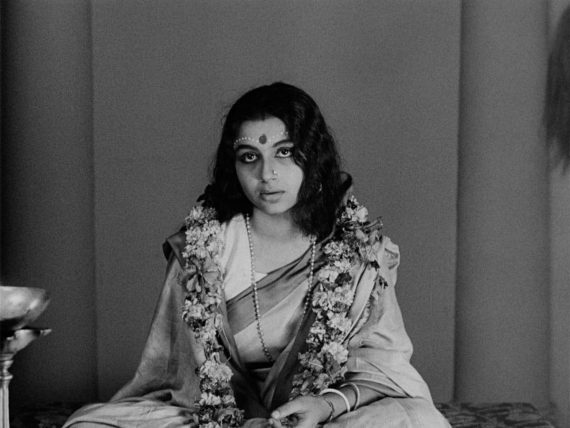 All of this would be nothing without a great cast, and Ray turns to actors he’s used before to deliver the goods. Sharmila Tagore and Soumitra Chatterjee were the central couple in Ray’s Apu Ansar before this. Once again they have a strong chemistry that sells the pair as a loving married couple. Devi was only Tagore’s second film after Apu Ansar. She had to work with more cast members here and does a wonderful job, considering her young age (she was only 14 or 15 during production). It’s a good job too, as much of the film relies on close-ups of her, with her face telling the story. There’s a particularly powerful scene carried purely through Doya and Uma looking at each other and delivering a few fairly subtle facial expressions.

Overall, it’s another masterpiece from Ray. A tragic and thought-provoking tale of faith and devotion, Devi is, on the surface, simple and sparse, but rich with substance and often transcendentally beautiful.

Devi is out on 22nd November on Blu-Ray in the UK, released by The Criterion Collection. There are some light scuffs and minor damage on the print but I imagine the master was lost in the fire that destroyed the negatives of a number of Ray’s films. Considering this, the film looks very good, with a detailed and pleasing image. The audio has a slight hiss too but this isn’t particularly distracting.

The interview program with actors Sharmila Tagore and Soumitra Chatterjee is a valuable asset. They describe their experiences and Ray’s process on set as well as analysing the film and discussing its reception in India.

Meheli Sen’s essay provides a short but thoughtful analysis of the film and its themes. It’s a solid addition to the set.

It’s a little light on extras by Criterion’s standards then, but everything included is of great value and the film itself is excellent, so Devi still comes highly recommended.