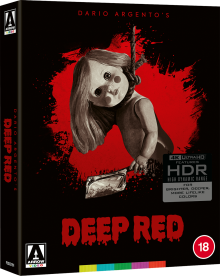 Dario Argento is a name easily recognised by horror fans, a director synonymous with the Giallo subgenre of thriller, a particular brand of murder mystery originating from the Italian pulp novels of the early 20th century. In a career spanning over 50 years, he has written, directed and produced thrillers that manage to bridge multiple horror subgenres, from straightforward thrillers to outright supernatural horror, all with an eye for stylish and often expressionist visuals accompanied by haunting soundtracks and gallons of blood. While the quality of his films has objectively diminished in recent years, his output from the 70’s and 80’s are arguably his strongest and boast some bona fide horror classics.

Nestled in the middle of this run is 1975’s Deep Red (or Profondo Rosso to give its original Italian title), a film which bridges the gap between Argento’s earlier non-supernatural thrillers like The Bird With The Crystal Plumage and Four Flies On Grey Velvet, with his later more horror focussed work like the absolute classic Suspiria. The film shows its ghostly hand from the scene setting opening sequence of a medium reading the minds of a theatre audience. As she probes deeper, however, she reads a mind that terrifies her – that of a murderer. After she herself is murdered, Marcus Daly (Hemmings), a British pianist living in Italy, becomes involved in trying to find out who the mysterious murderer is as the bodies begin to pile up.

Ultimately the story of a foreign artist in Italy attempting to solve murders is somewhat similar to Argento’s first film, the aforementioned The Bird With The Crystal Plumage, even down to the protagonist stumbling onto the scene of the first crime and bearing witness to a key clue that he then spends the rest of the film trying to remember, but Deep Red is a slightly more engaging story with its supernatural elements as well as its two leads, Hemmings and Daria Nicolodi who plays sassy reporter Gianna Brezzi. The interplay and flirting between the pair forms a large chunk of the film (an even larger chunk if you watch the original Italian cut) and it’s fun watching the confident and forthright Gianna cut down the curmudgeonly and casually misogynistic Marcus. 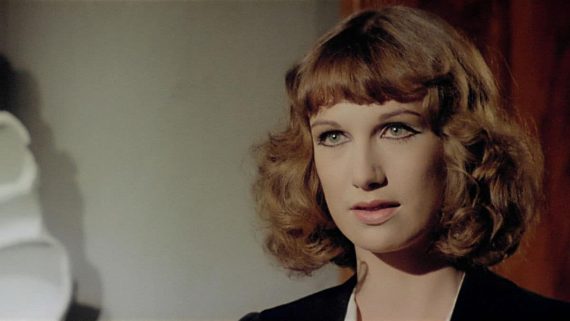 While this interplay does mean that many of the secondary characters get somewhat sidelined, something that does affect the final reveal somewhat, Argento fills the spaces in between with some of his most stylish slasher moments. As usual the killer is clad in black with the camera usually focussing on their hands only, as they stalk their victims and off them in multiple gruesome ways, from meat cleavers in the back, to drowning in scalding water and an incredibly painful looking murder involving the victim having their teeth smashed in. There are surprisingly few actual on screen killings, but the suddenness of them combined with the brutality makes them all the more impactful. Argento makes great use of close ups, macro photography and swooping gliding camera moves throughout these moments, lending them an almost surrealist feel at times, and the colour palette from the crisp blacks and golds to the (ahem) deep reds of the blood is only enhanced in this fantastic 4K HDR conversion. Deep Red was always a stunning film to watch and this elevates it to a whole new level, bringing out details I’d never seen during previous viewings.

Also enhanced by this new transfer is the films superb and erratic soundtrack, with an excellent use of music from the “in-shot” piano work, to the haunting nursery rhyme that recurs during the story and the pounding score by Italian band and frequent Argento collaborators Goblin. The sound is always crisp and loud although the Italian language track seems to have a slightly better mix between dialogue and music to the English dub.

Deep Red is an absolute Argento Classic, perhaps not as well known as films like Suspiria and Tenebrae, it boasts a great cast and a brilliantly suspenseful story. Less a full on horror film and more a mystery thriller that happens to feature a raft of gruesome murders, Deep Red is highly recommended to genre fans, especially in this glorious new transfer from Arrow.

This new transfer of Deep Red is a superbly generous set for collectors, not only featuring the bonus features from Arrow’s previous Blu-Ray release, but also a whole heap of new interviews with Argento and many of the actors from the film. It’s very talking head focussed, but it opens up a fantastic view of the film from those involved in its making, as does the new audio commentary on the original cut of the film.

The two disc set does provide both versions of the film in 4K which is also an excellent addition given that alternative cuts don’t always get the clean up treatment, but these two cuts provide an interestingly different look at the film. The International cut’s main focus is on streamlining the story by removing many of the humorous moments. While it definitely does its job at over 20 minutes shorter than the Italian cut, it’s a shame to see some of the more “banter” focussed scenes between Hemmings and Nicolodi gone, particularly those involving Marcus’ continual disgust at Gianna’s permanently broken car. On the whole, though, the leaner cut works better, and helps to bring some of the supporting characters to the front with more screen time, and doesn’t feature the odd hybrid soundtrack of the original cut, where the Italian lines that never received a dub are swapped into the English language track, often mid-scene. Still, it’s great that Arrow are giving fans the option to experience both versions in this set!