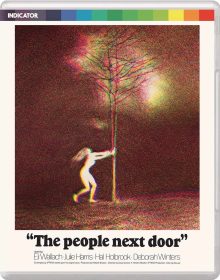 Few decades in the Twentieth Century can lay claim to such seismic cultural change as the 1960s, nor has such change ever been so strongly attributed and associated with the young. Think of the iconography of the 1960s and whatever springs to mind, be it music, hippies, peaceful protest, radical movements or drugs, a huge amount of it either originated from or involved the generation born in the forties, many of whom wanted to change the world (and to a large extent, briefly succeeded).

For a decade that saw such broad, sweeping changes, perhaps it is fitting that nothing defines the Sixties more than the mercurial music created by the young rock stars who became as powerful as politicians or the subsequent cultural movements born out of their success. Drugs, hippies, free love…all became synonymous with the music that dominated popular culture and the young in particular. It is easy to look back now and laugh at hippies harping on about world peace or dancing naked in a field to a group of stoned musicians, but at the time, many of the older, more conservative generation looked at this radical new ‘counter culture’ with genuine suspicion, fear and confusion. 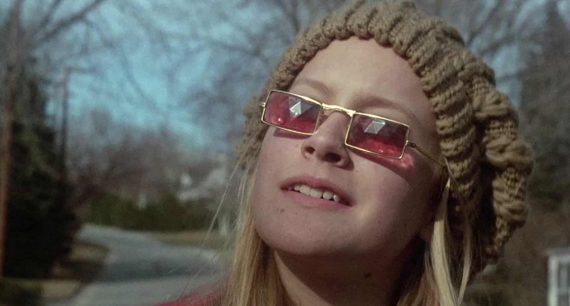 It is this kind of fear and confusion that takes centre stage in The People Next Door. Made right at the tail end of the Sixties by British director David Greene (who previously won an Emmy for a CBS television film of the same story) The People Next Door tells the story of the Masons, a well to do middle class family living in suburban America. Dad Arthur (Eli Wallach) is already sceptical of his son Alfie’s (Stephen McHattie) interest in ‘modern music’ but things really begin to go off the rails when his daughter Maxie (Deborah Winters) is caught tripping on LSD. As Maxie’s behaviour begins to grow increasingly erratic and destructive, the family are forced to take drastic action, the consequences of which may drive them apart forever.

Cinema is rife with classic tales of addiction and drug taking, such as The Lost Weekend, Leaving Las Vegas, Trainspotting or Requiem for a Dream. Part of their success comes from the way in which these addictions are depicted, which, as brutal, grim and depressing as they often are, still force us to watch with a fascinated sense of horror and revulsion. Whether we are familiar with subject matter or not, these films always manage to capture the world of addiction in a manner that feels horrifically, palpably real. Strip that away and these films loose the majority of their power. Which is why, unfortunately, The People Next Door fails so abysmally. 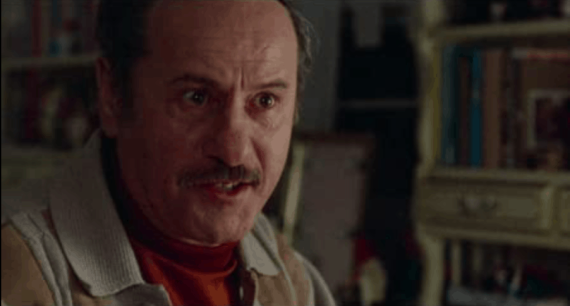 Granted, this is a film told from a parent’s point of view, not an addicts. We can expect a degree of separation. Nevertheless, The People Next Door’s depiction of Maxie’s LSD trips, which are meant to invoke that familiar sense of shock and horror, almost always veer towards the comic rather than the horrific. Quite simply, Maxie’s trips feel like a terrified adult’s idea of what acid entails rather than an authentic attempt to capture reality. Maxine is frequently seen wildly over-reacting, either crouched in a bedroom cupboard talking gibberish or running nude around her front garden in the middle of the night (Deborah Winter’s slightly histrionic, uneven performance certainly doesn’t help matters). 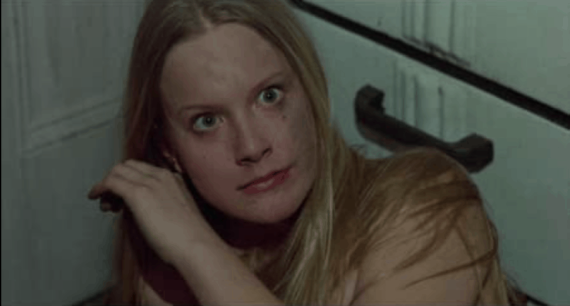 In fact, The People Next Door’s depiction of Maxie frequently veers towards a horror film rather than a family drama, the teenager coming across as a blonde haired Regan spitting venom and bile. Throughout the film, she acts as though she is slowing getting possessed, instead of merely getting high, either laughing maniacally after insulting her father or (in the film’s only genuinely shocking moment) trying to seduce him. As Maxie’s condition deteriorates, we are continually led to believe that her entire breakdown is due to a few bad trips, where her wild and unpredictable behaviour never seems to correlate to what the film suggests she has taken. 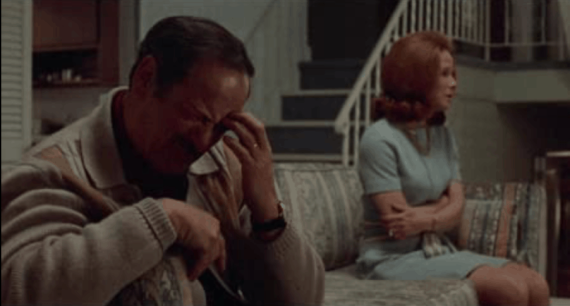 In fact, The People Next Door has a strong whiff of moral panic about it. Apart from Artie, young people in the film are painted in a generally unfavourable light, selling drugs, getting high and running riot in their schools, all meant to be indicative of a young generation going off the rails (and just wait for a group therapy scene in a psychiatrist’s office, which comes across as both absurd and laughable). Barely any attempt is made at balance or understanding, with Maxie herself feeling like a blank slate upon which conservative fears have been projected. Compare The People Next Door to Panic in Needle Park (which was released a year later) and its depiction of young people and drugs feels even more outdated, cartoonish and ignorant, its sentiments fuelled not by sympathy or a desire to understand but by a poorly judged motive to condemn and vilify. 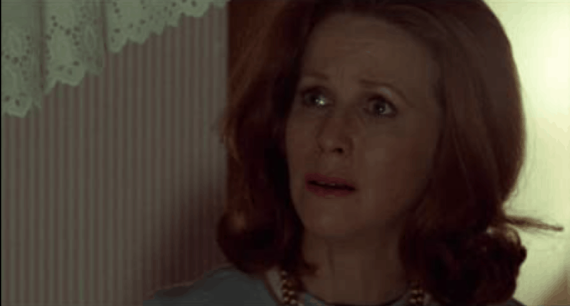 There are some redeeming features however. Screenwriter J.P. Miller and Greene attempt to show some depth in their story by highlighting the hypocrisy of the adults, who attack their kids for doing drugs while being happily addicted to sleeping tablets and alcohol themselves. The cast, too, is actually rather superb, filled with classic character actors. Eli Wallach and Julie Harris steal the show here (Wallach’s exceedingly subtle yet heartbreaking reaction to his daughter accusing him of having an affair is the work of a master) but great supporting turns from Hal Holbrook, Nehemiah Persoff, Cloris Leachman and Mike Kellin also consistently help to elevate the material. 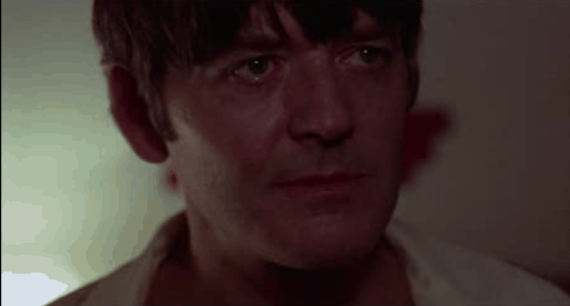 Visually, Greene and cinematographer Gordon Willis (just a few films away from filming The Godfather) shoot The People Next Door with a stylish yet practical economy, while if you are a fan of Sixties progressive rock, then several songs in the film may appeal, including the score (apart from one further laughable moment, where a music cue is used to reveal a suitcase full of drugs with as much build up and tension as a Hammer Horror movie might use to reveal its titular monster).

The Sixties movie equivalent of a Daily Mail moral outrage, The People Next Door fails as a realistic depiction of addiction and barely succeeds as a drama. Distorted and dated, it pales next to its contemporaries such as Panic in Needle Park or Easy Rider (as biased in its viewpoint as The People Next Door, to be fair, but hell, at least it feels genuine). It might garner some interest as a period piece or historical document in revealing how suburban, conservative America felt about drugs and the counter culture, but beyond that faint praise (and its admittedly great cast) there remains little to recommend it.

The People Next Door is being released by Indicator in one of their standard limited editions of 3000 units. Indicator’s source for the film has come from a 4K restoration of the OCN and it looks wonderful, with a very organic film like appearance that does great justice to Gordon Willis’ photography. The encode is, as ever, top notch. The original mono audio is punchy and clear. Extras are as follows:

Commentary: Film historian Lee Gambin and actor Rutanya Alda (who has a very brief role in the film as a Nurse) provide a loose, chatty commentary full of background info and anecdotes (of which there are plenty from Rutanya Alda). The focus here is more on various actor’s backgrounds and a general discussion of the film as opposed to a more analytical take. While the conversation veers off track a few times this is a thoroughly entertaining listen.

Tripping with Maxie: Deborah Winters provides a lengthy forty minute interview, discussing her background as an actress as well as her experiences working on The People Next Door. Offering lots of great info and trivia, Winters is an engaging and informative host who easily keeps your attention over the forty minutes. An interesting watch.

Structured How to Feel: This is a brief but nevertheless entertaining interview with the film’s editor, where he not only reminisces about The People Next Door but his wider career working with director David Greene.

My Life in Review: In this deeper look into the music of the film, John Sheldon from The Bead Game (it is this band playing at the beginning of the film; Sheldon was the guitarist) discusses his musical career (he offers some great anecdotes about recording in the same studio as Hendrix when he was recording Band of Gypsies) as well as his thoughts about shooting The People Next Door. Unsurprisingly, when watching the finished article, some members of the band were sceptical about the film’s depiction of LSD.

People Person: In what is the best extra on the disc, film historian Vic Pratt provides a fascinating overview and analysis of director David Green’s career prior to making The People Next Door. Pratt crams a lot of info into this 18 minutes and really helps you to appreciate this cult British director.

The package is rounded out with an image gallery and one of Indicator’s outstanding booklets.  This contains a warm appreciation of the The People Next Door that contextualises it against other films of its era, a series of contemporary reviews for the TV version of the film (which was better received than the cinema version), an brief interview with Wallach that took place just before he shot The People Next Door, a reproduction of the vinyl soundtrack’s liner notes, (with a short essay that goes into more info about film’s music) as well as a sample of contemporary reviews.