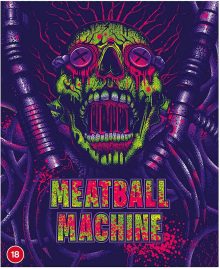 The 2000s saw a wave of so-called ‘splatter’ films coming out of Japan. These horror/action hybrids were generally low-budget affairs that turned their blood and violence levels up to 11 to provide deliriously bonkers gore-fests.

Though not the first of this wave (it was even a remake of a 1999 film of the same name), Yudai Yamaguchi and Jun’ichi Yamamoto’s 2005 splatter film Meatball Machine was one of the first to reach Western shores, finding fans in various genre festivals and obtaining DVD releases around Europe and the US.

Versus beat Meatball Machine to the punch though, released in 2000 and making its way overseas as part of the ‘Asia extreme’ boom. It was my introduction to Japanese splatter movies too, though it wasn’t until I saw Machine Girl at the Dead by Dawn festival in 2008 that I took notice of the genre as a whole. I watched several other entries to the genre following that and enjoyed them all.

One title I somehow missed, however, was Meatball Machine. With Terracotta Distribution releasing the film in a limited edition Blu-ray, I saw my chance to remedy that and my thoughts on the film follow.

Meatball Machine sees Issey Takahashi play Yoji, a young man who falls in love with Sachiko (Aoba Kawai), a girl who works nearby. Yoji is cripplingly shy though, and can only watch whilst his more lewd and boisterous colleagues vie for her attention. One night, however, Yoji stops one of the men from raping Sachiko and the pair look to be about to finally hook up when, unfortunately, something rather unforeseen happens. 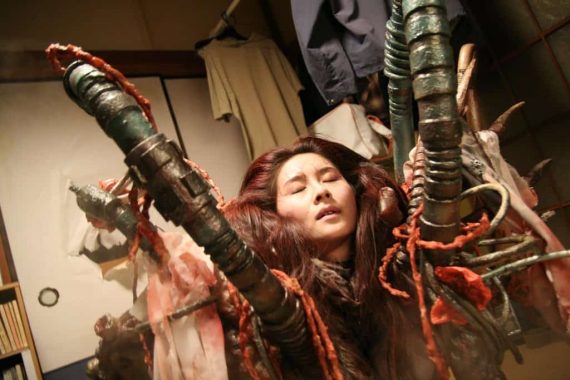 You see, whilst this romance has been unfolding, we’ve seen a handful of alien parasites take over the bodies of humans and battle it out to get the honour of eating the defeated creature’s gland/sphere, which is where the parasite lives and controls its host.

Foolishly, Yoji had discovered one of the parasites (which was injured, so temporarily inactive) and taken it home. During a moment of intimacy between Yoji and Sachiko, the parasite wakes up though and turns the girl into what is called a ‘NecroBorg’. She/it doesn’t kill Yoji, thankfully, but escapes into the night. The young man wants to get Sachiko back so attempts to follow, meeting a father-daughter team of NecroBorg killers (Kenichi Kawasaki and Ayano Yamamoto) along the way, who illuminate him (and the audience) on the situation.

When we discover the pair have sinister motives in taking Yoji under their wing, it’s left to him to put a stop to things and try to free Sachiko in any way he can.

Japanese splatter films have a reputation for having nonsensical plots that are as messy as the gore on screen, but I found Meatball Machine’s to be surprisingly clear and effective. The central romance may not be particularly original or complex, but the chemistry is there in those key early scenes and you really feel for the pair when they’re ripped apart in more ways than one.

With this central focus, I was also surprised to find it was a more serious film than I originally expected. A lot of the Japanese splatter films I know, such as Machine Girl, are comedies as much as they’re horror films, cranking up everything to such a ridiculous degree that they’re silly rather than scary. Meatball Machine still pushes things firmly into the over-the-top camp, so there is giddy entertainment to be had in all the blood-soaked mayhem, but it still manages to take its central conceit seriously and delivers a dramatically satisfying film in amongst the gore and grue. 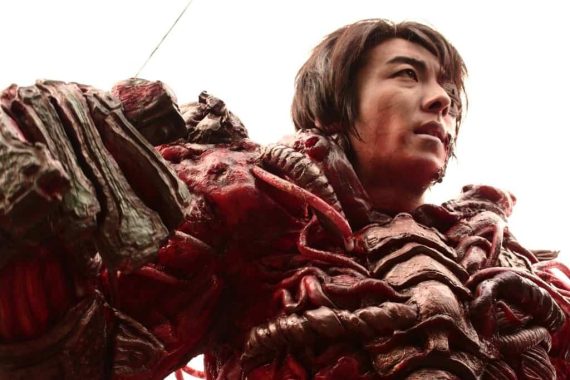 Speaking of which, the special make-up effects, provided by the king of Japanese splatter effects, Yoshihiro Nishimura, are suitably outlandish and impressive, drawing inspiration from (as the film does on the whole) Tetsuo: The Iron Man. Newcomers to the genre might be less impressed, as the costumes and makeup are far from realistic, looking rubbery and overblown, but the exaggerated makeshift nature of it all is part of the charm. Considering the film was made for only 10 million Yen (toughly £65,500), they do a bloody good job of it, that’s for sure.

The production had problems too. Jun’ichi Yamamoto, who made the original 1999 film, was initially down to direct by himself. However, after hitting the edit suite with the footage from the shoot, he and producer Yukihiko Yamaguchi weren’t satisfied with the results. They decided to reshoot a large portion of the film and these were so extensive, they ran as long as the original shoot. Reportedly Yamamoto was ill, so couldn’t do the reshoots, meaning Yamaguchi took over and finished the project. However, to me, it sounds more like Yamaguchi thought Yamamoto wasn’t up to the task after the disappointing original footage so did it himself.

Either way, the reshoots must have done the trick. It may not be as goofy and extravagant as some of the other, later splatter movies, but Meatball Machine remains entertaining and engaging through a surprisingly effective core narrative and sympathetic characters. It still has plenty of gore, bizarre concepts and an energetic low-tech style too, which will keep fans happy. I certainly enjoyed it and believe it’s up there with the best of the genre. 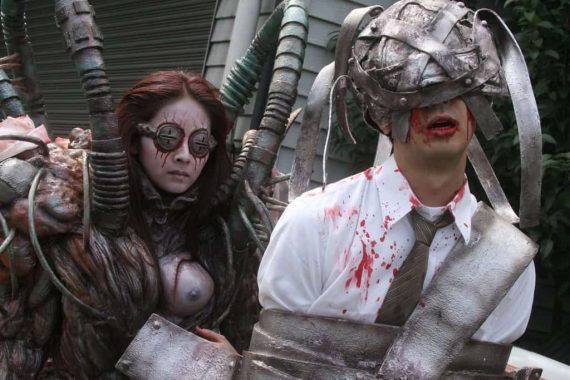 Terracotta Distribution have released Meatball Machine on Limited Edition Blu-ray with slipcase, and it’s available now. The best place to buy is direct from their online store (which I recommend for picking up a number of Asian cinema releases at decent prices).

The picture quality is not great, to be honest. There are ‘jaggies’ on some edges as well as other unusual artefacts. This might sound damning and yes, it’s not great to see these crop up, but due to the budget and era of production, the film is likely to have been shot on SD digital cameras. As such, this HD presentation is probably an upscaled transfer that can’t totally mask the limitations of the source material. I can’t confirm this for certain though.

The audio is solid though, with the often quite noisy soundtrack blaring through with suitable weight.

The Issei Takahashi, Yudai Yamaguchi and Yoshihiro Nishimura commentary is great. The trio are honest about the film’s shortcomings and have plenty of behind the scenes anecdotes and secrets to share. I was interested to hear about the extensive reshoot that took place in particular, though a little too much of the commentary is taken up by them pointing out which shots/scenes were from which shoot.

The short films are welcome additions to the set. Reject of Death is a dialogue-free, intense short that tells the story of the daughter character. Unfortunately, it has shockingly racist ‘blacked up’ African, native American and Chinese characters with exaggerated features and physicalities that might turn people off. The practical gore effects are inventive and impressive though so there’s twisted, sick fun to be had if you can turn a blind eye to its problems.

What About Doi? Calls itself a documentary that looks at what the forklift driver (Yoji’s friend or maybe brother) does on his day off, spending much of his time looking for a particular doll. It’s very strange. The racist characters make another appearance too, unfortunately.

The interviews with the cast and crew are enjoyable and offer some personal takes on the shoot as well as background information on how the project came about. There’s also some behind the scenes footage from both Meatball Machine and Reject of Death.

The director gives a 2-minute forced intro to the film which is fleshed out a little to 5 mins in the extras. It skims over the background to the production, prepping you for what you’re about to watch.

The cover design is fantastic and there’s a neat little featurette that shows the stages of its creation. Similarly, the concept designs are brief but worth a look.

So, whilst the transfer might not sell the Blu-ray format for this release, there are more than enough extra features on the disc to make it a recommended purchase.