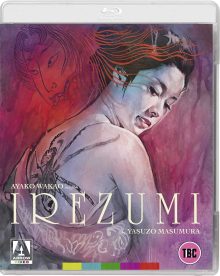 Arrow Video have been releasing a number of Yasuzô Masumura films over the past year or so, starting with the double-bill Blu-ray of Black Test Car and The Black Report, followed by Giants and Toys, Irezumi and, coming later in the year, Blind Beast. I’ve heard good things about all these titles so, given my penchant for East Asian cinema, I was keen to check them out.

However, the titles always seemed to come out in months cluttered with great releases and I’ve ended up passing on the first couple to be able to cover something else. I finally made time for one of Masumura’s films though, with Irezumi, which Arrow are soon releasing on Blu-ray. Now I’ve seen it, I’m kicking myself for skipping over the first three.

Irezumi is based on the classic short story ‘Shisei’ (‘The Tattooer’ in English), written in 1910 by the renowned Japanese author, Jun’ichirô Tanizaki. It was only a few hundred words long, so had to be embellished a great deal for the adaptation and that honour was bestowed upon screenwriter Kaneto Shindô, who is perhaps now best known as the writer-director of classics such as Onibaba, The Naked Island and Kuroneko.

Irezumi sees Ayako Wakao play Otsuya, the daughter of a fairly wealthy and important man. She’s in love with one of her father’s employees, Shinsuke (Akio Hasegawa), and the pair run away to get married, as Otsuya’s father doesn’t approve of the relationship.

The couple hideout on the boat of one of Otsuya’s father’s associates, Gonji, who offers to help talk her father around on their pairing. However, Gonji double-crosses Otsuya and Shinsuke, selling the former to a geisha house and ordering someone to kill the latter.

The already headstrong Otsuya doesn’t act like an innocent victim, however. After she’s tattooed with the elaborate image of a spider on her back, symbolising her entry into the world of the geisha, Otsuya takes to the role whole-heartedly, seeing the ‘job’ as her way of feeding off the many men that have wronged her.

When she discovers Shinsuke is alive and well after murdering the assassin sent to kill him, she takes her revenge even further, using her sexuality and his abilities to murder those who have hurt her the most. Shinsuke is not as cold-hearted as Otsuya but his love for her is too strong, so he can’t help but act out her commands.

Meanwhile, Seikichi (Gaku Yamamoto), the man who tattooed Otsuya, follows the woman, disturbed by how, in his mind, his artistic creation seems to have possessed her and has turned her evil.

Irezumi is a dark and often quite disturbing film that can be tough and gritty in some senses, whilst offering a supernatural or mystical quality in the spider tattoo aspects of the tale.

In many ways, it actually plays out like a kabuki play, in fact, with a heightened atmosphere and a number of references to kabuki conventions (there are various mentions of the classic ‘lovers suicide’ scenario and women being sold as geishas is a topic frequently used in such plays). These classic conventions are often subverted though through extreme violence and a generally unfiltered approach to the material.

Most notably, the violence is messy in the film and the pain prolonged. There’s no stylish, swift, elegantly choreographed action here. Instead, it’s kept believably scrappy, grisly (one man is killed by a knife through the head) and uncomfortably drawn out. This adds a grim authenticity to proceedings, often absent from many similar period pieces.

The themes of the film are fascinatingly conflicted too. Masumura and Shindô examine the power struggle between men and women. Most of the men in the film use and abuse Otsuya but she employs her own seductive powers to manipulate them in revenge. Then you have Shinsuke, who is controlled by her and, despite being the most murderous character, is probably the weakest-willed.

The characters are quite complex in general, with Otsuya not simply turning ‘evil’ after becoming a geisha. She’s manipulative and strong from the beginning, when we see her force Shinsuke into running away with her.

Irezumi is also impressive from an artistic and technical standpoint. Kazuo Miyagawa was the DOP and he’s considered one of Japan’s greatest cinematographers, a regular collaborator with Akira Kurosawa, Kon Ichikawa and Kenji Mizoguchi. So, as you’d imagine, Irezumi looks fantastic. Miyagawa uses sharp, deep focus, strong contrast and splashes of vivid colours to bring the dark world of the film alive.

Overall then, Irezumi is a grim, twisted tale of thematic complexity, told with strikingly beautiful imagery. The film is cold and ruthless, like its protagonist, so won’t be to everyone’s tastes, but it’s hard for anyone to deny its masterful craftsmanship.

Irezumi is out on 21st June on Blu-ray, released by Arrow Video. The picture quality is remarkable. It’s pin-sharp, with rich colours and textures. It looks like it was shot yesterday. The stills used in this review are screengrabs to give you an idea of picture quality. Audio is pristine too.

David Desser’s commentary is decent, providing a healthy mix of background information on the film and thoughtful analysis.

Tony Rayns introduction, as usual, offers a well-researched and intelligent perspective on the film. He also provides some useful background information on the production.

Daisuke Miyao’s essay concerns the film’s cinematography and is rather technical and academic so not as easily digestible as the other features and feels quite dry. He makes some interesting points though and looks at the introduction of the Eastman colour process to Japan.

All-in-all, it’s a solid package and a fantastic restoration of a great film, so comes strongly recommended.